A Short Review of AFL On Demand

A few years ago. the AFL launched a service called AFL On Demand, which provides footy fans with a wide variety of content. Recently, I decided to take a peak at it for myself and see what it is like. Think of it as the "Netflix of the AFL". While you won't get any live AFL games (those can be found on Watch AFL), highlights (in both short and long form) are included, which are uploaded shortly after the games conclude. The service is completely free, and does not require any VPN or log-ins.

Other content found on AFL On Demand includes original programs such as the Yokayi Footy show, which discusses AFL from an Indigenous viewpoint, AFL Exchange, a video podcast discussing the latest AFL news,  The W Show, focusing on AFLW, and some documentaries like Unveiling An Icon , which is about former St Kilda and Western Bulldogs player Nicky Winmar and his stand against racism. Each of the clubs have their own section, however most of the content in the club section hasn't been updated in quite some time.

The AFL has announced that the match between the Qantas Indigenous All Stars and the Adelaide Crows will have live video coverage on the AFL web site http://www.afl.com.au at no charge to visitors beginning at 4:15 AM US/CAN EST (8.15 PM AEDT) on Saturday 7 February.  You will not need to be a subscriber to the AFL web site international subscription package or the Aussie Sport TV package (now the same) in order to view this video.  For those concerned about whether they will be able to use the AFL web site video this season, this might be a great opportunity to test things out.  Radio coverage will also be available and as always, is free.

After years of frustration, things are about to get a lot better 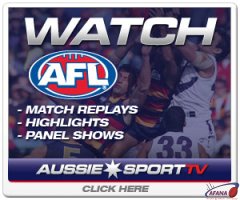 for viewers of AFL video online beginning July 3rd.   A new service called Aussie Sport TV is coming online and will offer AFL video in flash format (similar to YouTube and other sites).   This will replace the existing video offerings of Telstra's Bigpond service, including for afl.com.au subscribers.   Even better, some of that video will be available here on AFANA.com.   We will have more details on AFANA's part of this very shortly.   Please note:  the service will not be live until July 3rd.   If you are not already a subscriber to afl.com.au you can subscribe to this new service at this link:  Aussie Sport TV.  (Please use this link only as subscriptions through this link generate commissions for AFANA!).  If you already are a subscriber to afl.com.au, you are subscribed to this new service automatically at no additional charge!   Today AFL web site subscribers may have received the following notice:
Read more