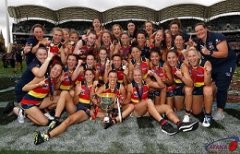 The 2022 AFL Women's Schedule:
(dates and times are local in Australia)

Featured AFL and AFLW Matches on Radio This Week

A listing of Australian Football League matches available by radio and the internet during the season plus links to our AFANA web apps to use to listen to them. All AFL matches listed are available on afl.com.au and are free, no subscription required or can be listened to by following the instructions here.