Up until 1986, there were only 12 teams in the then VFL (the name changed in 1990), comprising the original teams from 1896 as well as Hawthorn, Richmond, Footscray (now Western Bulldogs) and North Melbourne being admitted later (see our Footy FAQ for more history). 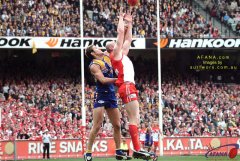 All these teams were based in Victoria, seven in Melbourne and the Cats in Geelong (just an hour's drive west of Melbourne). In 1987, the league decided to expand their horizons in an effort to spread the game.
Read more

On Tuesday June 14th, the AFL Hall of Fame welcomed its six newest inductees. The 2016 class included a wonderful mix of stars of the modern era plus those from South Australian and Western Australian football, as well as the emotional induction of the late and great Maurice Rioli, revered by supporters of both his “home” club South Fremantle and his adopted VFL club in Richmond.

Here is the rundown on the six inductees:
Read more

A withering display of class and teamwork boosted St Kilda’s Premiership rating sky high on Easter Saturday. The Saints were in outstanding touch, completely wrong footing a disappointing and ineffective West Coast Eagles side. Coach John Worsfold must be shaking his head in dismay over the lack luster performance of his senior players who capitulated in dismal fashion under a devastating football lesson handed out courtesy of the unstoppable Saints brigade.