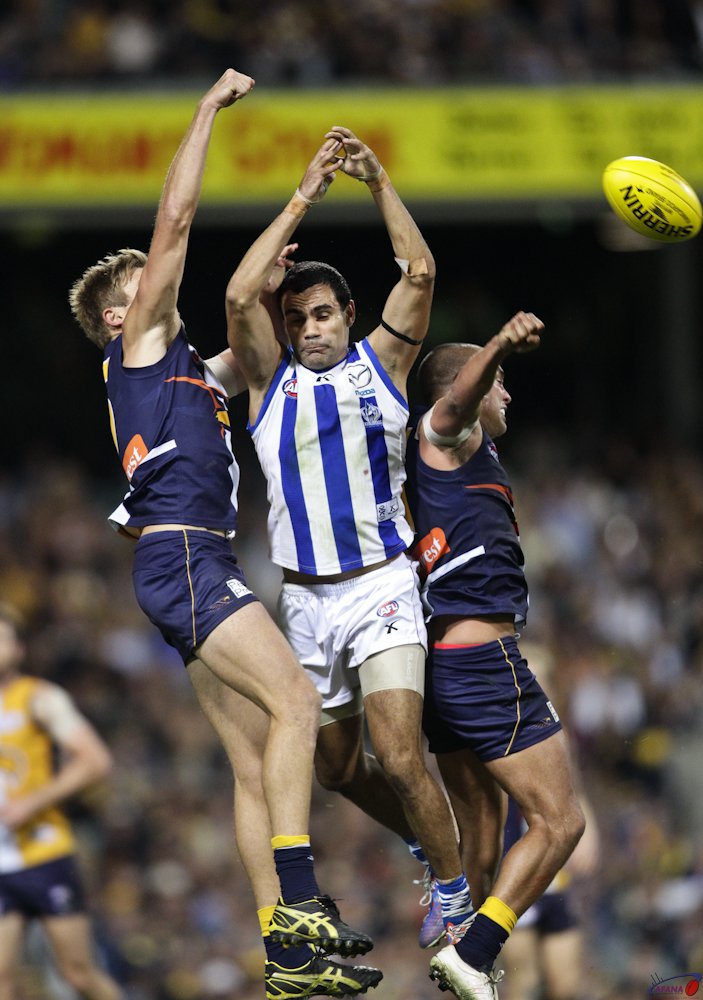 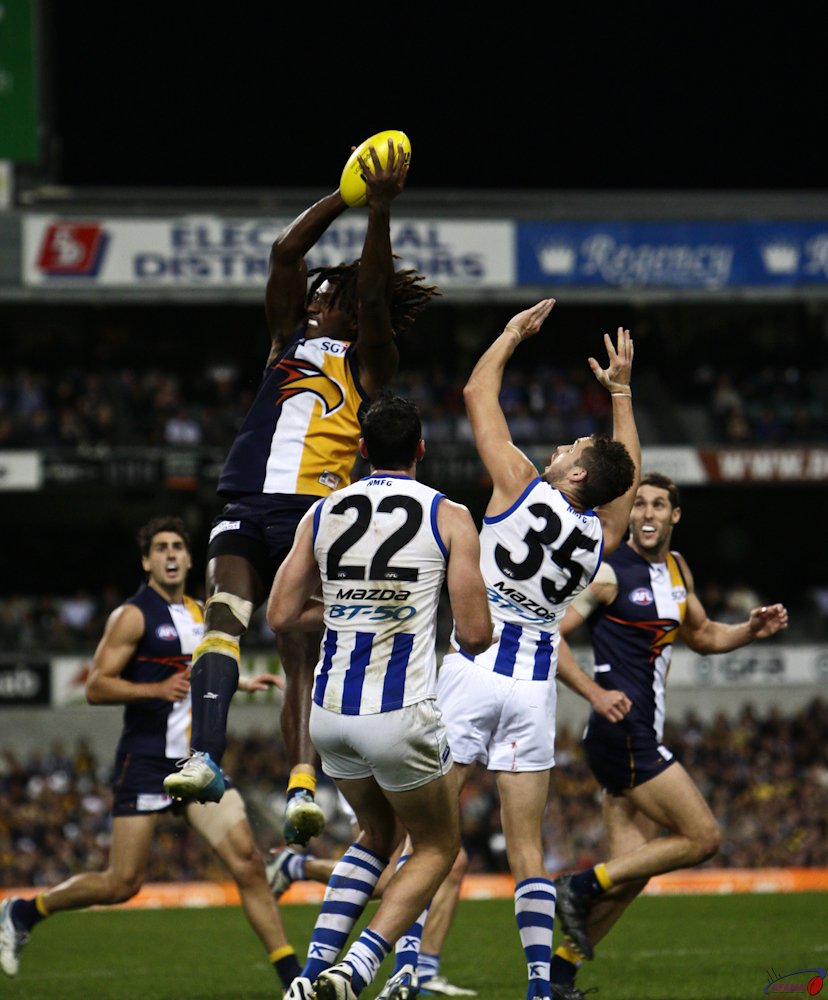 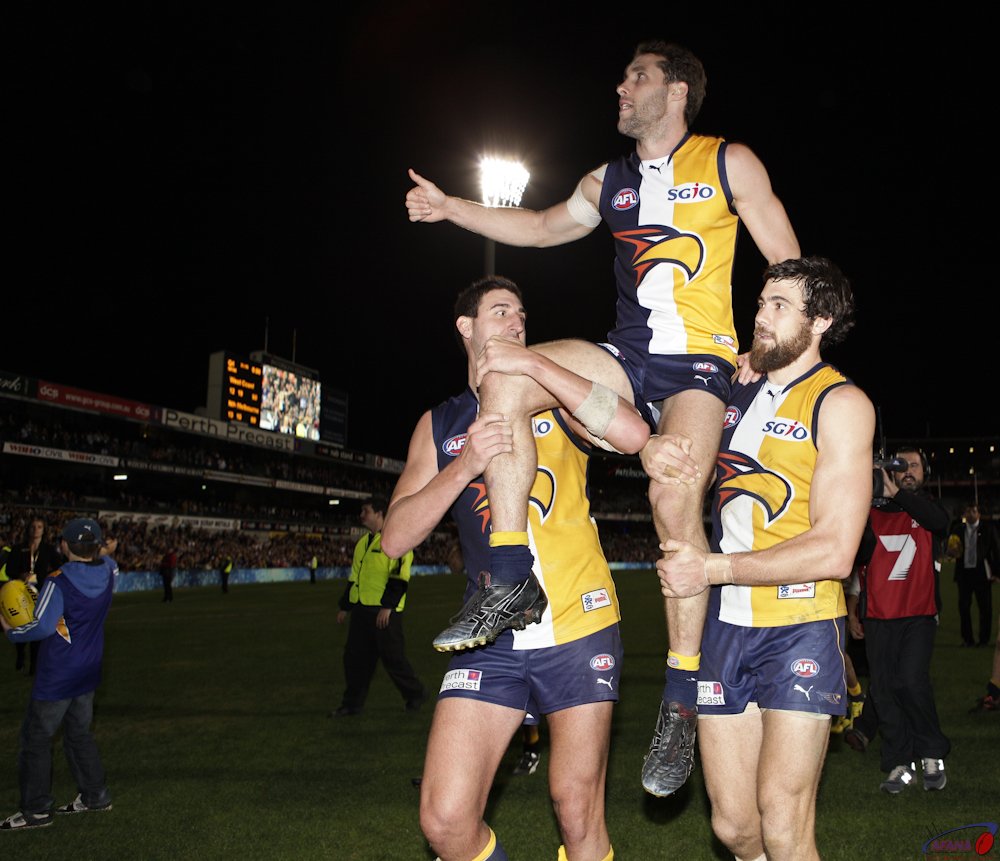 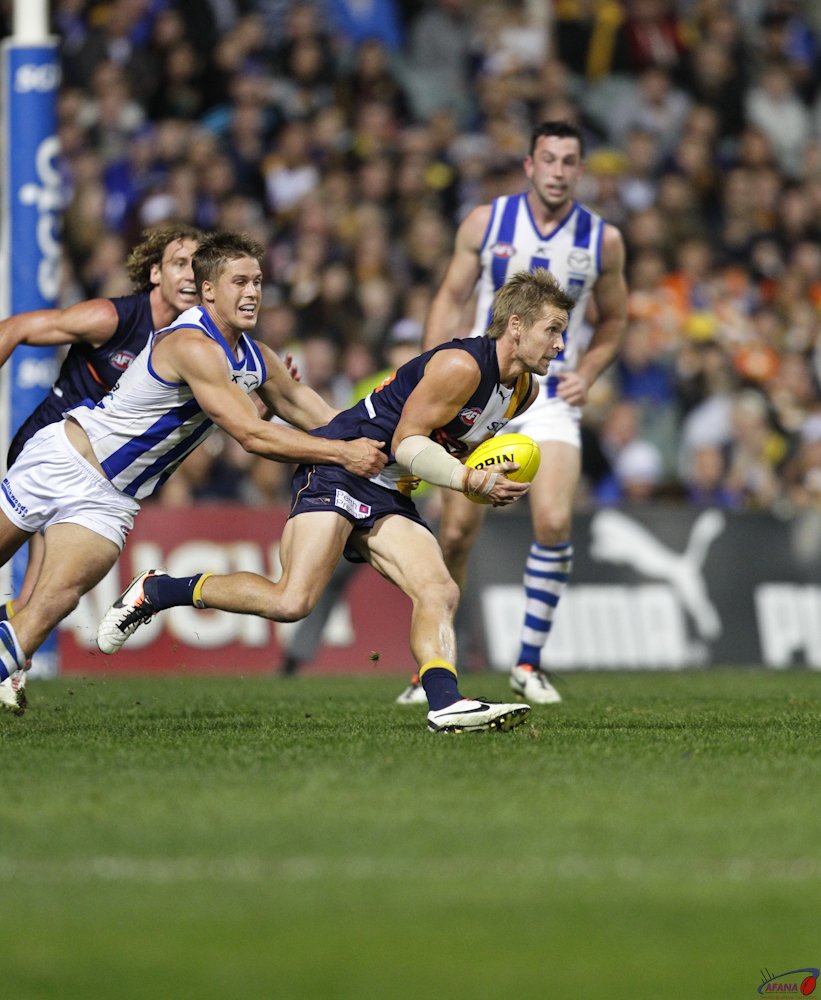 In what started as a shootout, both teams went goal for goal with veteran Boomer Harvey scoring the Roos’ first. There was crisp, accurate ball control from both sides as well as accurate shots on goals. North players were spreading well and sharing the ball around with six different goal kickers in the first term. Along with Harvey, Daniel Wells was carving up his opposition through the midfield as they farmed the ball out to their forwards with clinical precision. The Eagles were not attacking as well as the opposition but were hitting up their targets in the forward zone and converting their chances, albeit not as often. It looked ominous for the Eagles at the end of the quarter when they were trailing by nearly three goals and looking much less threatening than the Kangaroos.

West Coast pegged the deficit back early in the second quarter with a goal to Mark LeCras. They looked promising but this was the only goal they scored for the entire quarter. The Eagle goal kicking “yips” set in and Eagles forwards could not buy a goal despite their numerous attempts. The Kangaroos were not faring much better as Ben Cunnington scored their only goal for the quarter amidst a couple of points. In fact there was a combined 12 attempts on goal from both teams for the paltry return of a goal apiece. LeCras was one player who has been particularly affected in recent times with his goal kicking accuracy well down on his pre-injury form. West Coast lost Sharrod Wellingham to an ankle problem early - the opposite ankle to the one he hurt on a trampoline in a preseason accident - and were forced to activate their substitute Brad Sheppherd. Despite their persistence and determination, the Eagles had only pulled back four points as the half ended. As with previous weeks, poor shooting on goals was hurting the cause and is being regularly remarked upon in West Coast’s statistics.

North pressed on and looked the better team as they transitioned the ball from end to end to produce a goal against the play to wunderkind Majak Daw. Daw is the first Sudanese born athlete to play Australian football and has enjoyed a dream start to his career with the press following his every move. Unfortunately this goal was his only real contribution the game and, finding himself going from chocolates to boiled lollies in seven days, Majak was substituted by Sam Gibson soon after. Things became a bit frantic for both sides at one stage where the "play on at all costs" led to a comedy of errors reminiscent of a Little League game. "Play on" equated to "give the ball to your opponents" as players fumbled opportunities and then had to work twice as hard to recover the ball. West Coast emerged from the chaos to kick four goals in the term with Josh Hill evolving as a potential match winner on their forward line. His willingness to chase and pass the ball to a teammate in a better position was inspirational in their attacking zone. At the other end of the ground, Aaron Black was doing his best to win the game off his own trusty foot by booting back-to-back goals in the dying minutes of the third quarter. His efforts ensured that the Kangaroos went into the final term leading by four points.

Still looking the best team on the ground, North Melbourne’s Jack Ziebell showed a clean pair of heels to burst through a pack and kick their first goal. Hill was working overtime for the Eagles and was the difference in keeping them close enough to hit the front. Try as they might, West Coast seemed to be on the losing end of the contest when North kicked two in a row to take what looked like a comfortable lead and run away with the match. The Eagles threw everything into the ring as time ran away from them and goals to the irrepressible Hill and Luke Shuey saw the lead cut back to a meager four points. With 40 seconds on the clock, Adam Selwood drew a free kick about 60 meters from goal - too far out to score and with every player from both teams in front of him. With nothing to lose he sent a "Hail Mary" kick as long and high as he could towards the goals. In what will be played on highlight reels for years to come, Naitanui took off and flew from three deep in the pack to eventually mark the ball on his chest, much to the frenzied delight of the home crowd. The siren rang as he went back to take his kick. He calmly walked in and, amidst the jeers and antics of every Kangaroo player trying to upset his aim, slotted the winning goal through the posts.

As well as a great result in Darren Glass's 250th game, the victory meant that West Coast keeps in touch with the Top Eight and with some expected wins in the coming rounds they should be well placed to make a run towards the Finals. The Kangaroos were gritty and showed poise and determination in their game plan. In the end, they were unlucky not to take the four points for a win.