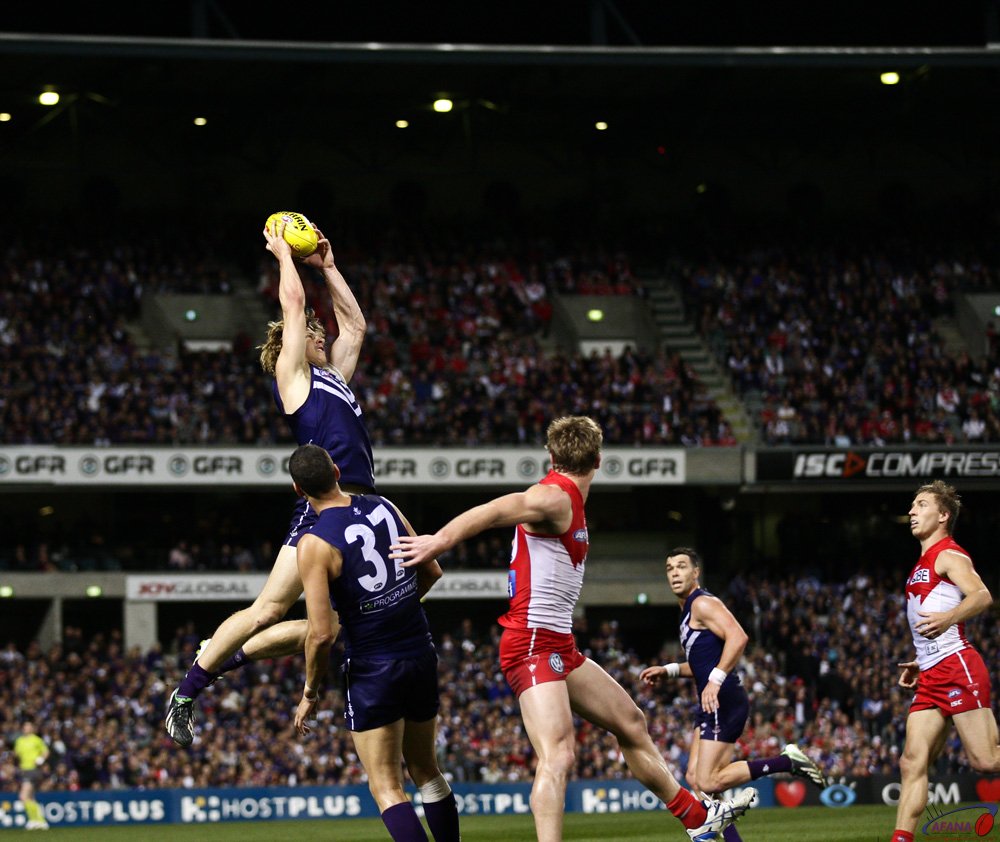 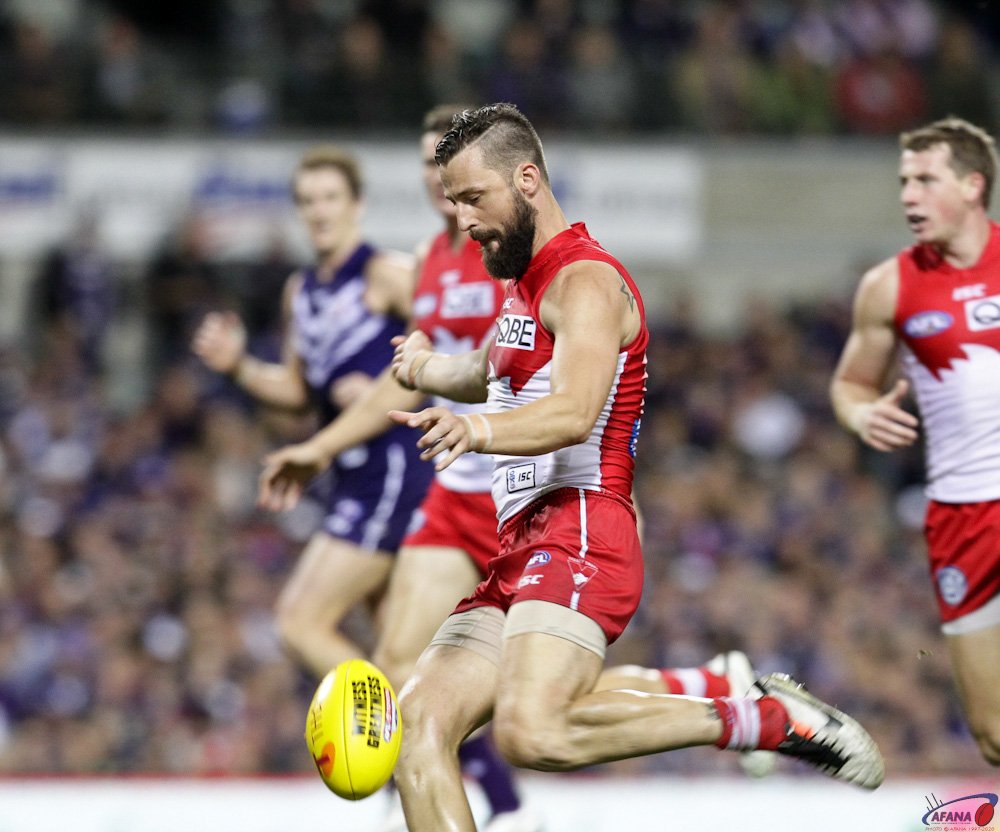 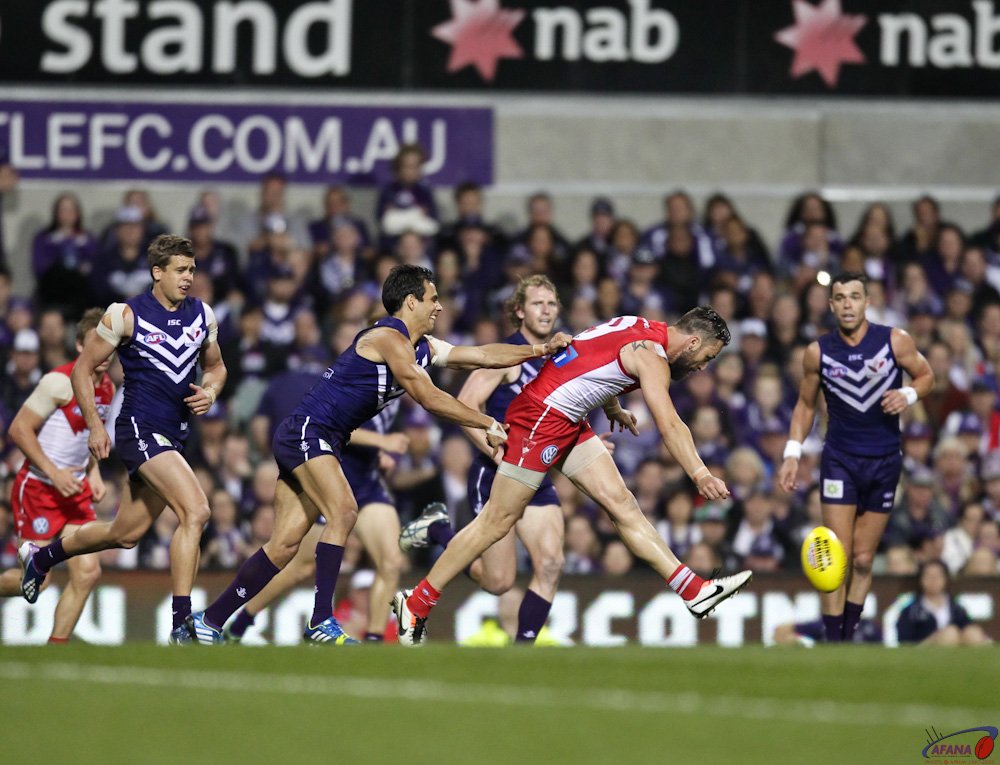 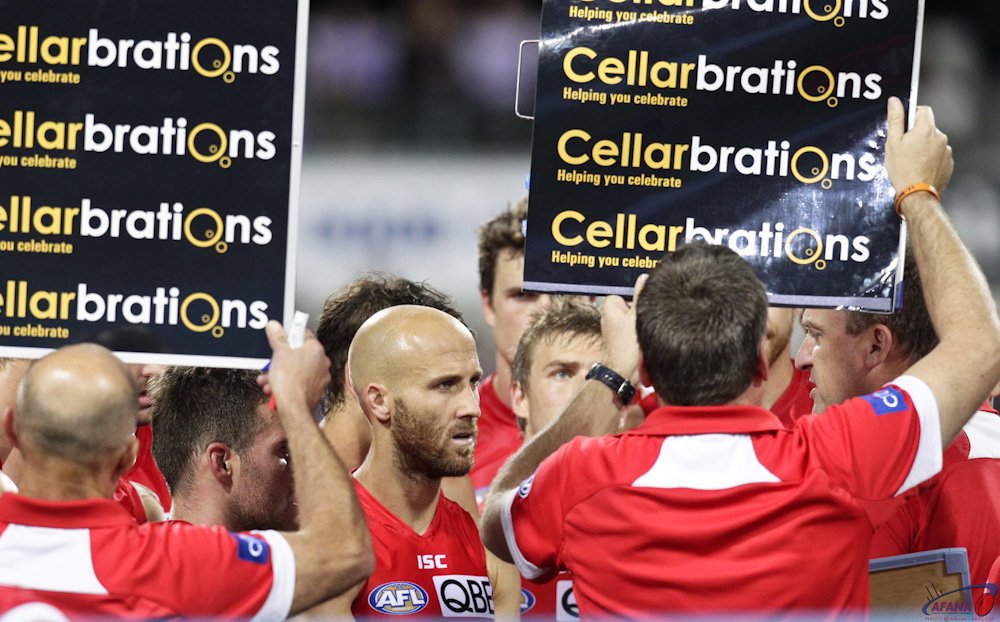 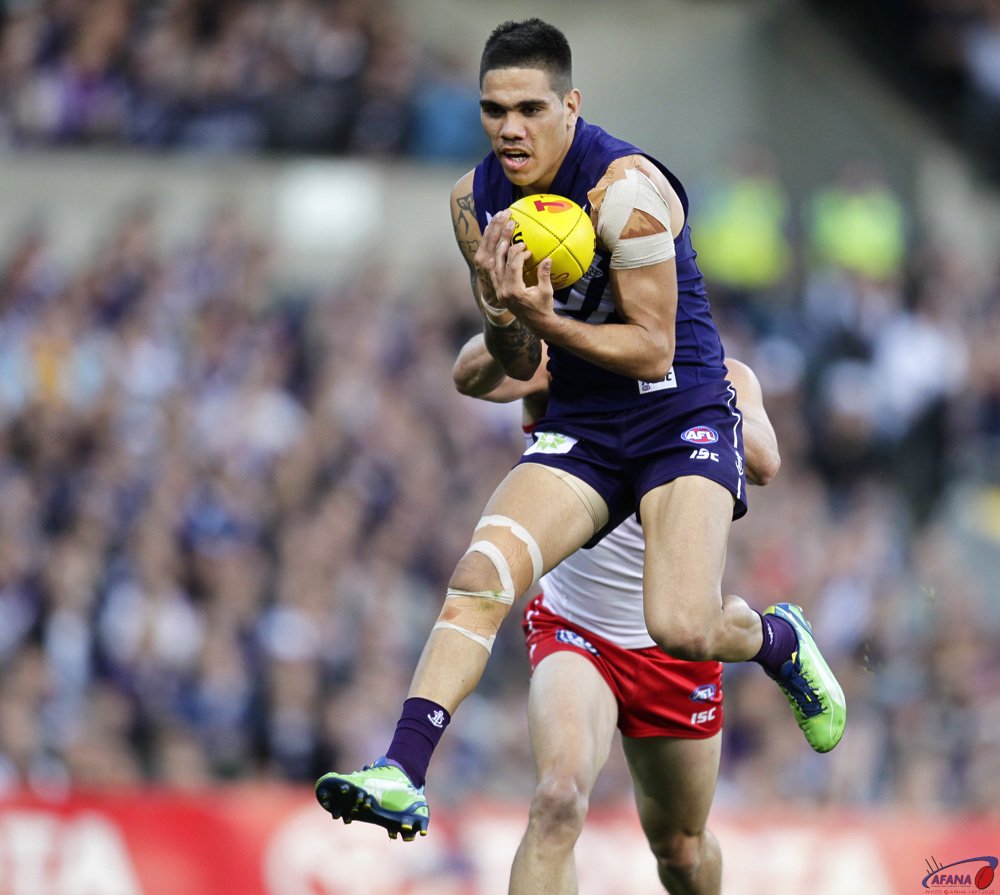 Fremantle started the game reminiscent of the Energizer bunny - full of run and enthusiasm. This frenetic energy resulted in much of the play in their forward half and many shots on goal. Unfortunately they were in danger of kicking themselves out of the contest because big stage nerves meant that their accuracy was compromised. Lewis Jetta kicked the first goal of the game for Sydney after eight minutes and against the general run of play. Although Sydney did not get the ball forward very often, they were efficient in their scoring when they did. The Dockers evened the score when Michael Walters took a mark after Fremantle kept pushing the ball their way at every opportunity. Skipper Matthew Pavlich was in fine form and his goal gave Fremantle two in a row. Again Sydney showed their sniping ability when Harry Cunningham made the most of a snap around the body to score their second goal. The Dockers were very wasteful at the other end and had squandered a chance to blow the game out of the water early kicking nine points from 11 shots on goal.

In what would prove to be a match winning second quarter, Fremantle swarmed the Swans in a display of attacking football that has rarely been seen. Their hunger for the contest and domination of the clearance play saw the Swans bewildered and panicked every time they went near the ball. There were no clean possessions and the Swans were constantly harassed by purple packs. In the rare event that they moved the ball towards their scoring zone, Fremantle’s sweepers were marking and repelling everything that came their way. Sydney was breaking down at the half forward line and in contrast the Dockers were mounting attacks from deep in defense that had the goals flowing. Four individual goal scorers for the Dockers during the quarter meant that the beleaguered Swans back men were finding it difficult to arrest the flood. Sydney’s attacking momentum ground to a halt and they only managed a single behind for the whole quarter. Turnovers were also costing Sydney and to this stage of the game their inability to keep control of the ball had gifted the Dockers with five goals, four behinds. At the main break Fremantle held a commanding 39 point lead with 18 scoring shots to a paltry four. 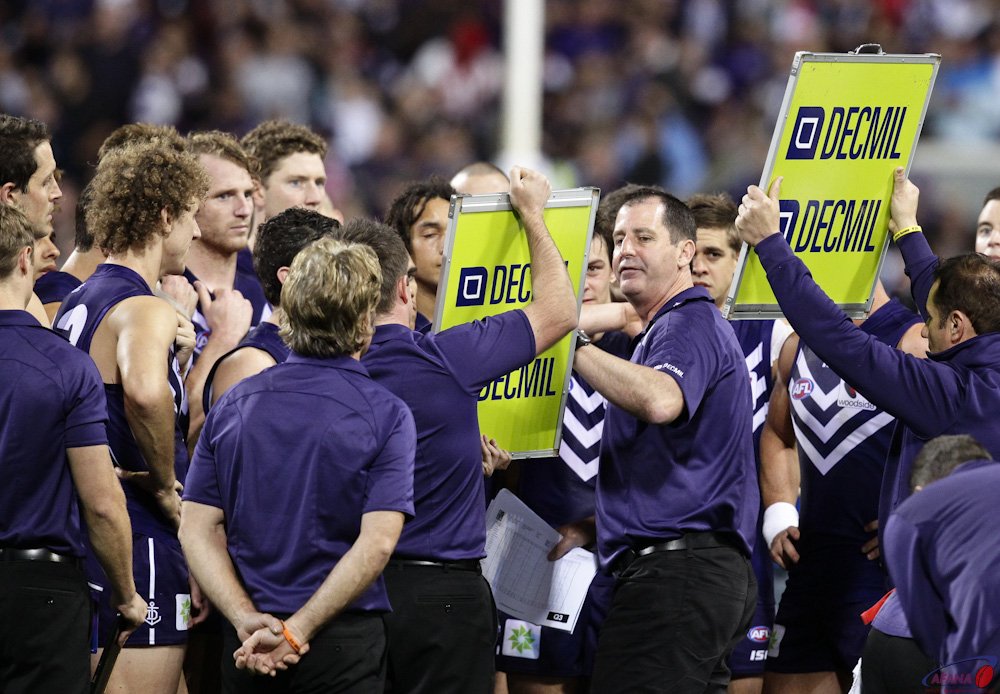 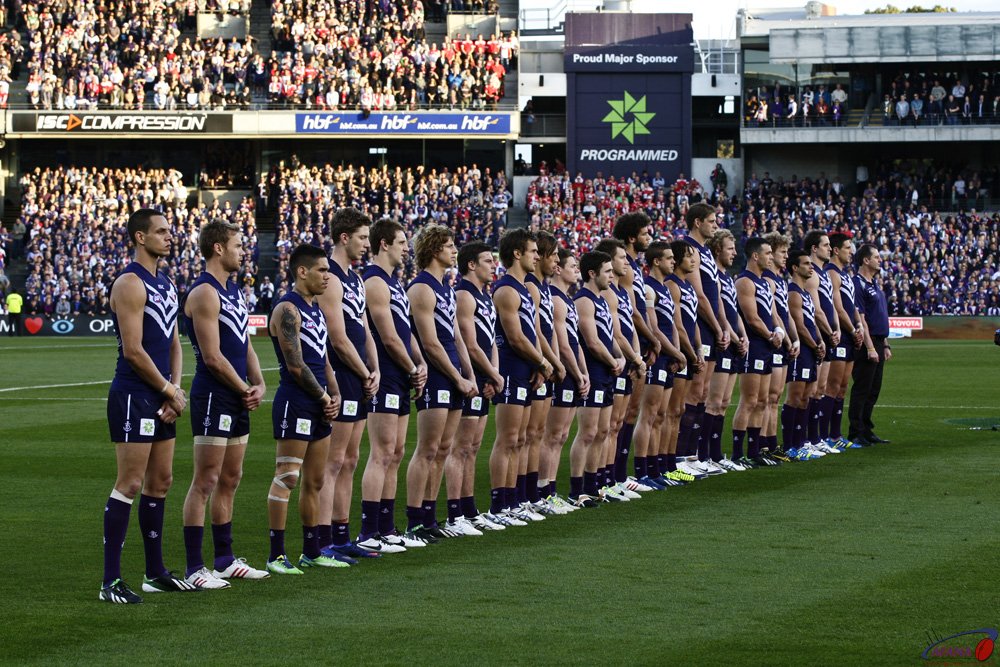 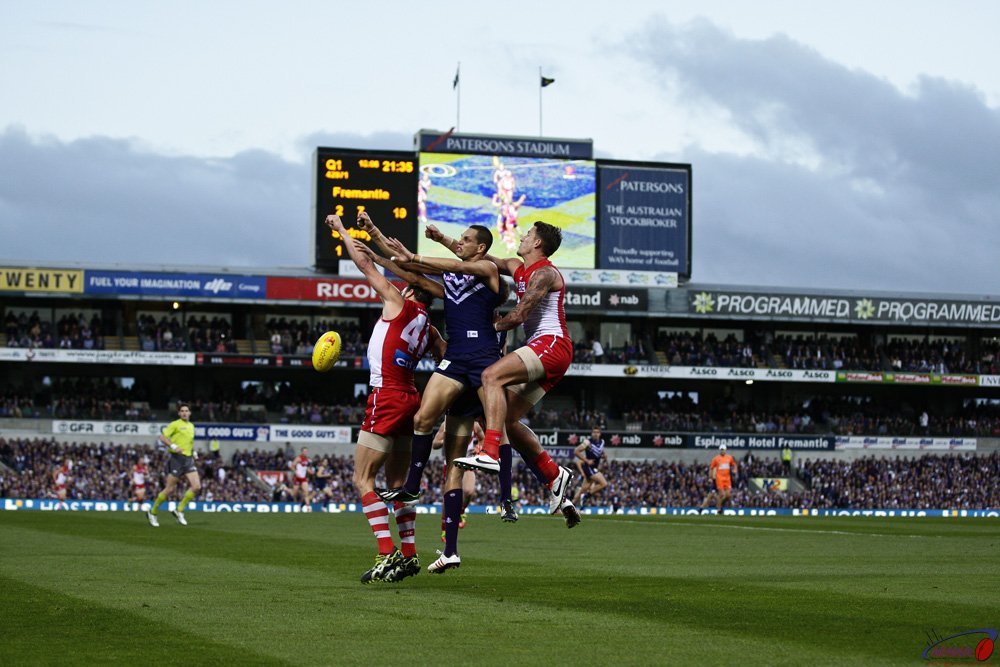 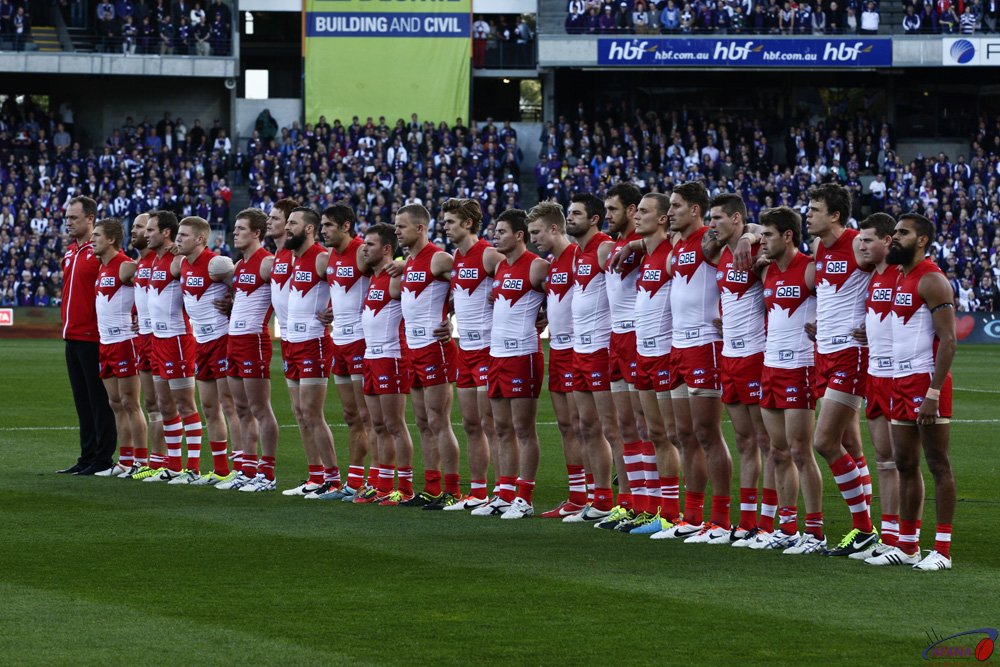 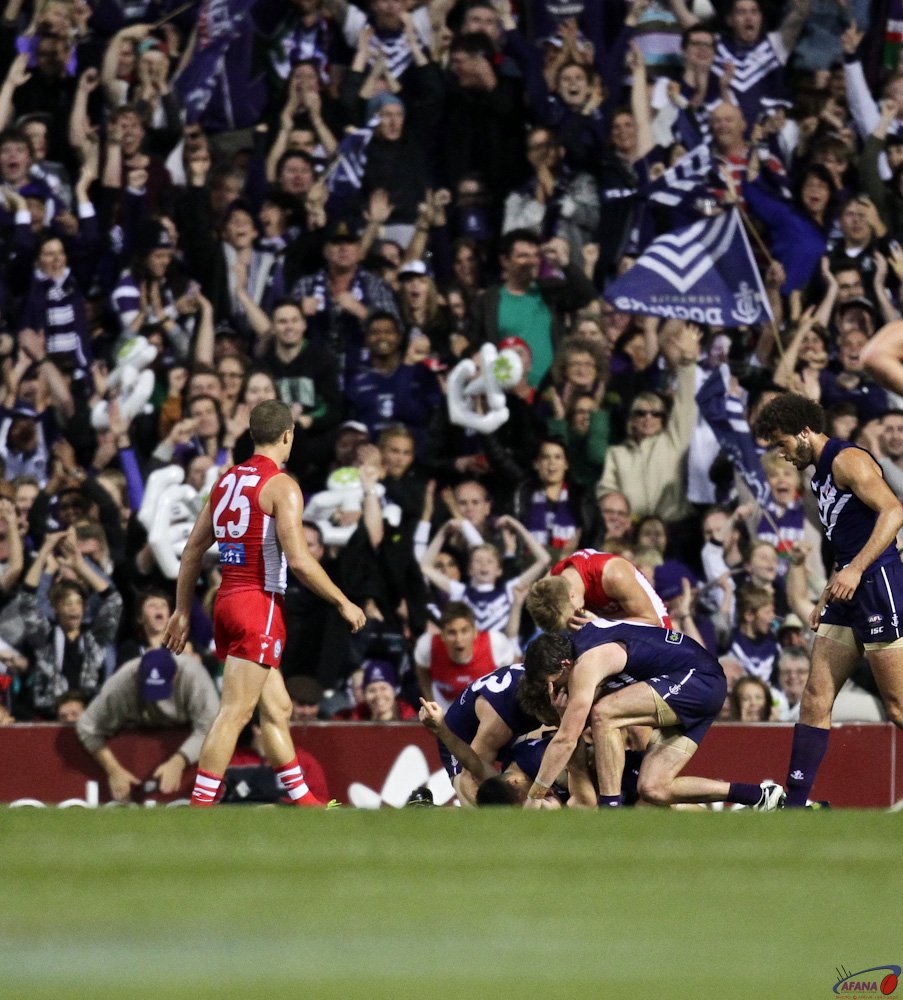 Sydney must have been faced with some serious coaching input at half time because they came out steaming. They started to get more of the football and looked more competitive in every contest. So much so that they were controlling the ball in their end of the ground for a change. It wasn’t long before their hard work paid off and Luke Parker kicked their first to start the hard road back. It had been a long time between drinks for Sydney as it was their first goal since the 23 minute mark of the first quarter. Coach Longmire pulled out all the stops and made his substitute early in the piece. Craig Bird was the unlucky player to leave the ground for Gary Rohan. The game developed into an arm wrestle with both teams going goal for goal throughout the term. Walters took the mark of the night when he soared over the pack to take a screamer directly in front of goals. He kicked truly for his third. Substitute Rohan made an impact from the bench when he snapped a clever goal from the pocket to give the Swans some faint hope of pegging back the lead. Fremantle made their own substitute when they dragged the luckless Matt de Boer in his 100th game after a poor showing. Lachie Neale replaced him and was immediately on the scoreboard with a seemingly slow motion goal. He found himself in the clear only 40 meters out when everyone ran past him on their way to somewhere else and he had time to steady and slot what might well have been the sealer. When Nate “Fly” Fyfe added to Fremantle’s tally just before the siren the lead had blown out to 43 points.

Whether it was pride pricked or Fremantle winding down to avoid Grand Final threatening injuries, Sydney came back with a vengeance in the final quarter. After giving away the first two goals it would have been easy to wave the white flag and retire into their shells with “season over” the watchwords. Sydney kicked the next six out of seven goals but unfortunately they were running against the clock and time wasn’t on their side. To their credit they wound the margin back to 19 points and if not for the work that Fremantle had put in earlier in the game, may have been able to pinch a win. Hayden Ballantyne put through the steadier goal for Fremantle late in the quarter and the siren sounded with the Dockers in front by 25 points. 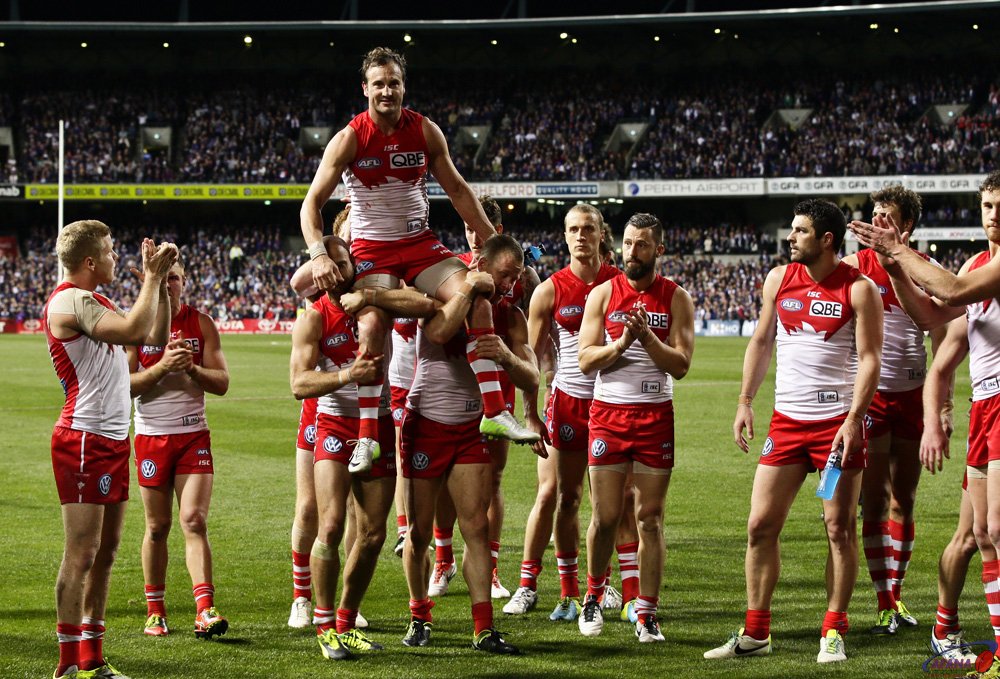 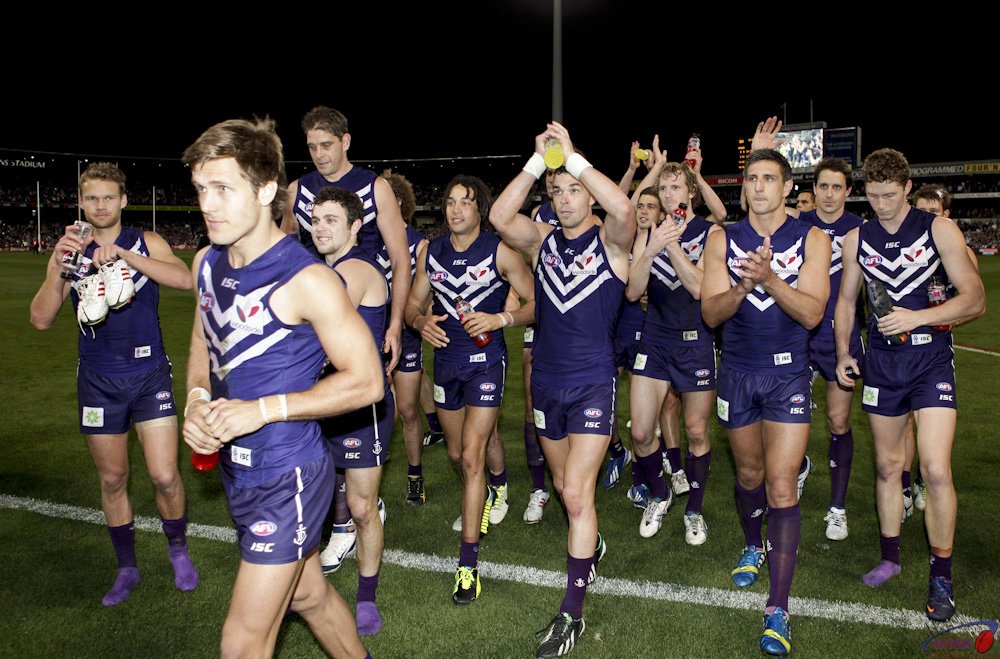 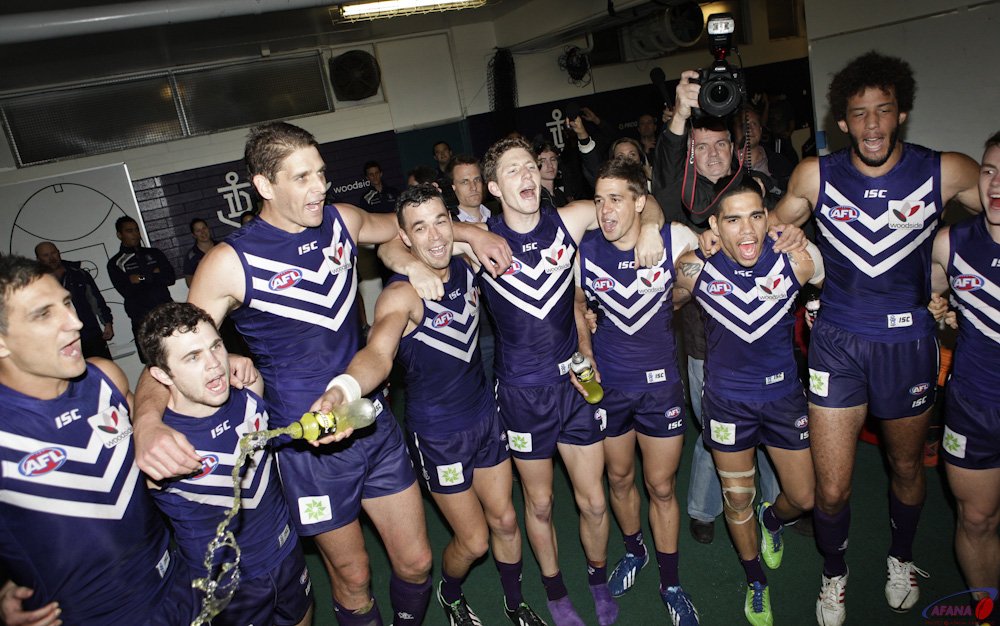 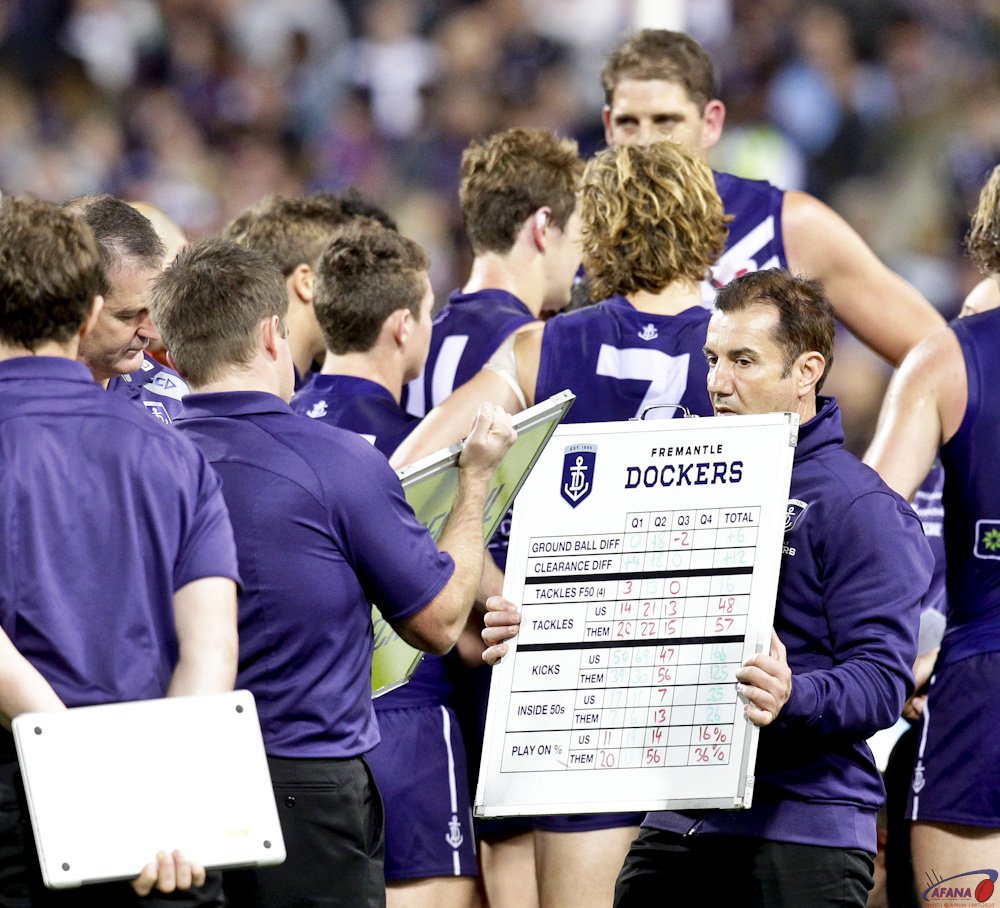 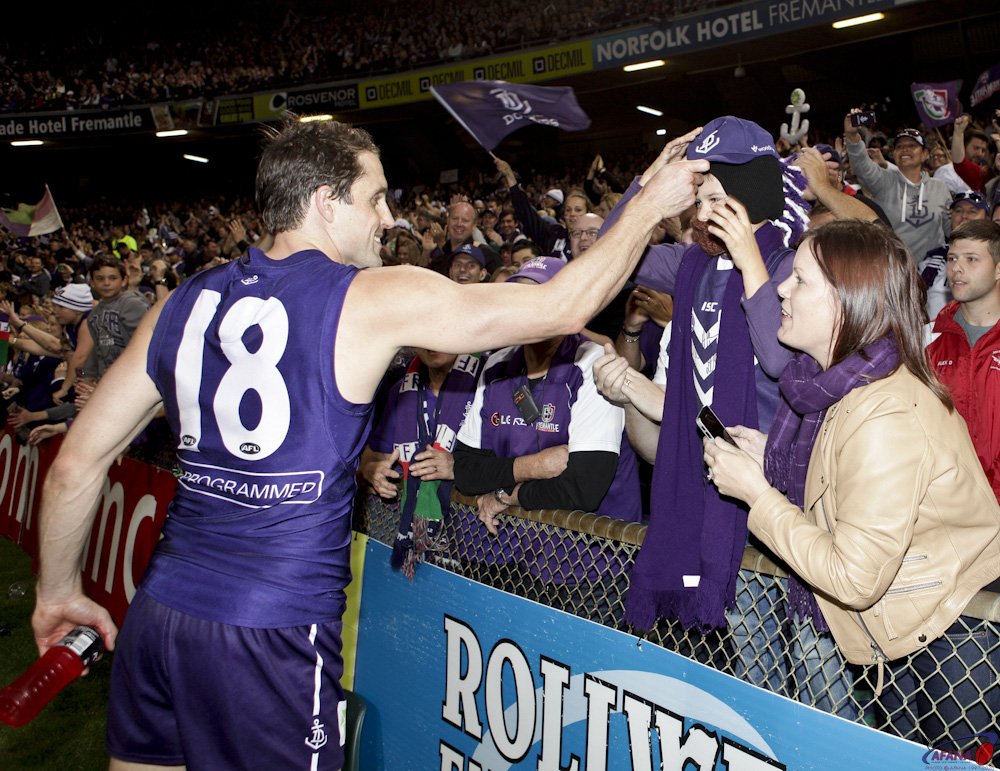 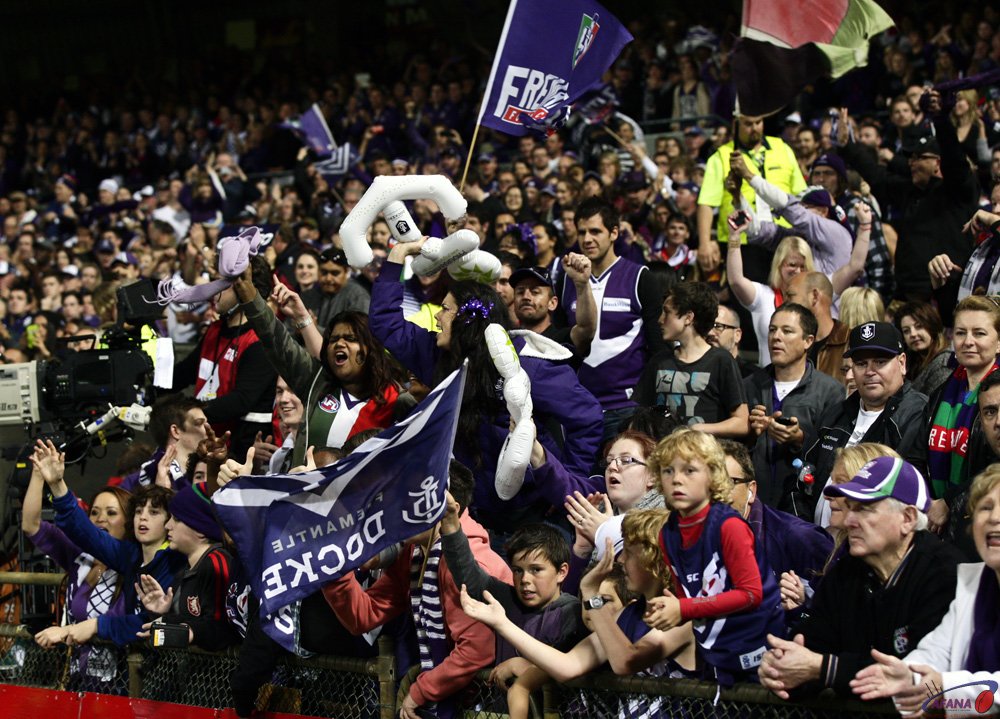 Fremantle is heading for the Grand Final for the first time in the club's 19 year history. The Dockers may be the underdogs but if they show the same grit and determination that this game produced they will take the contest right up to Hawthorn. With all their players coming through uninjured, they will be at full strength next week and in with a real chance for a Premiership Flag.