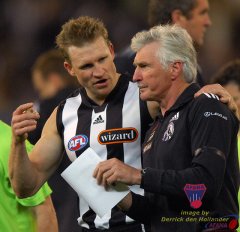 The meeting took place at the office of club president Mark LoGiudice and it was decided that Mick Malthouse was out as the senior coach. That same morning, Mick had spoken on SEN Radio, saying he would not be stepping down. He expressed puzzlement at why the board would wait another two weeks to make a decision as surely they could judge him on his 31 year coaching record. Malthouse did concede that he did not expect a contract extension and that it would be "an uphill battle" to keep the job, especially with the departures of Steven Kernahan as president and CEO Greg Swann who were instrumental in his appointment. He also took a veiled swipe at the current board, saying boards could crack under pressure and that firing the senior coach takes the pressure off. These comments came just a week after he angered LoGiudice and CEO Steven Trigg by suggesting the club's publicly stated position of rebuilding had contributed to the team's horror start to the season. Trigg hit back, expressing surprise that Malthouse had gone "off message" and conceded there was "potentially a point" at which coach and club would part ways before the season was done.

LoGiudice issued a statement in which he said that "Mick’s obvious public misalignment with the football club has resulted in a loss of trust between the Club and coach." Mentioning the radio interview, he added "the situation had deteriorated to such an extent that not making a change now would only exacerbate our current position". He refused to concede that the current season was a write-off and denied that the club was in crisis.

CEO Steven Trigg backed his president but refused to comment on the meeting which sealed Mick's fate. However, he did say that everyone - coach, president, CEO, captain and head of football - all had to be in sync. He did admit the recent media storm had forced the club to look at how they had handled the issue and that the decision had come sooner as a result of pressure. He said the bye weekend would have been the appropriate time for the review.

Assistant coach John Barker (the Blues' defensive coach) will take over for the remainder of the season. Assistants Rob Wiley and Dean Laidley will continue in their current roles along with the other assistant coaches. Of Barker, LoGiudice said he would "nurture our younger talent and give them a chance ... this is also an opportunity for our players to demonstrate their commitment and show their passion for our jumper." He ended by thanking Malthouse for his contributions to Carlton and his position as a legend of the game.

Malthouse was not present at the club press conference but did advise the players before departing and issued his own statement. "I wish to thank the Carlton Football Club for my brief time ... and I wish the team well for the remainder of the season ... I want to thank the AFL and the wider football community for allowing me to be part of their game, and for their continued support over the past 40 odd years. I have loved it all, the good and the bad." Malthouse, 61, indicated he would not coach again. "This concludes my coaching journey but I will enjoy viewing the game from afar and its progress." He acknowledged his sometimes prickly, even acrimonious, relationship with the media. "To the media I wish you well - despite our constant battlefield......you might even miss me! I bear no grudges and I have no regrets.

In related news, Malthouse claimed in the same interview that when Steven Trigg arrived at Carlton from Adelaide, he told Malthouse that the Crows had a deal with small forward Eddie Betts 18 months before Betts left the Blues. Everyone involved has denied the claim. Adelaide chairman Rob Chapman called it absolutely outrageous and "unfounded and unsubstantiated ... a slur against the club and a slur against Eddie Betts". Adelaide is also angered at being dragged into Carlton's dismissal of Malthouse. The club's official statement read in part that it "categorically denies any inappropriate dealings regarding the signing of forward Eddie Betts. We are extremely disappointed by comments made to the contrary today."

Carlton CEO Steven Trigg, who was suspended by the AFL for his role in the Kurt Tippett contract scandal, also denied the allegations, saying he hoped it was a misunderstanding by Malthouse of comments Trigg had made about Adelaide researching Betts before recruiting him when his contract was finished with the Blues. He added "there are eight people sitting around the list management table who heard quite consistently from me the reference to Betts being ... what Carlton needs to do in terms of its database and its analytics and what Adelaide did from 12 months out — in terms of benchmarking Betts against every small forward in the competition to arrive at an evaluation and deciding whether to act on him ... That is a very, very far cry from having an agreement.” He believes there are plenty of people at Carlton involved with list management who could corroborate his story.

Betts' manager Ned Guy was emphatic that there had been no such deal. Guy pointed out that Betts had been a restricted free agent so Carlton had the right to match any club's contract offer. He confirmed this by saying "Eddie didn't make his decision until the end of the season ... Eddie was a restricted free agent so he would have been unable to enter a binding agreement with any club because Carlton had the right of reply to match any offer ... he did not ... have an in-principle agreement with Adelaide or any club." It is believed that Betts had significant offers from North Melbourne and GWS before heading to South Australia. Malthouse had also commented that with Betts already set to leave, he had played "cautiously". Guy called the comment "disappointing and offensive" and pointed out that Betts' 2013 season had been seriously interrupted by first a broken jaw, then a suspension.

If Betts had signed with the Crows while still under contract with Carlton, the Crows could be punished for breaching AFL rules. No player can sign with a rival club while in contract, but a player is allowed to talk to clubs. Due to the seriousness of the allegation, the AFL will investigate and the League's integrity department has already contacted several relevant parties.

Editors Note: The AFL has cleared the Crows and former CEO Stephen Trigg of any impropriety. AFANA fans can read more at http://www.afl.com.au/news/2015-05-28/crows-cleared-in-eddie-betts-case