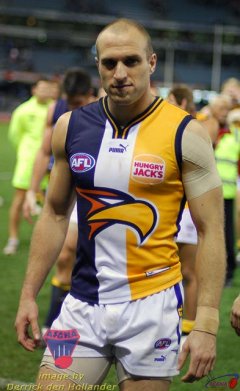 Six minutes into the first quarter at Carlton's Round 10 match against Adelaide, Chris Judd landed awkwardly and his knee buckled. Later, the worst was confirmed. Judd had ruptured his ACL. When asked by a reporter later that night if it was probably the end, Judd replied "Yep". Two days later, Judd confirmed that he was retiring. Judd admitted that it wasn't easy to walk away from football, calling it his life's passion. Even he knew it was the end when the injury was confirmed. He described his career as "... an incredible fortunate journey" from which he will take many fond memories.

Judd, 31, fronted up for a press conference attended by his family, former president Stephen Kernahan, current Carlton president Mark LoGiudice, CEO Steven Trigg, interim coach John Barker, and Carlton's playing leadership group. During the conference, he said he realized he played on for one too many seasons but did it for the right reasons. Judd paid tribute to his coaches, teammates and fans; reserving special praise for assistant coach Rob Wiley who worked with him at both West Coast and Carlton, and physical therapist Mark Harwood for helping him manage his injuries and fitness.

Judd has his share of injury issues during his career, not least two shoulder reconstructions before the age of 17. The last several seasons at West Coast, he was beset with groin problems which affected his back, restricting the explosive speed for which he was renowned. He admitted that injury forced him to change his game style from a run-and-gun player to a more contested ball winner due to losing some of that speed. He was happy to have made it through 279 games with the dodgy shoulders.

Judd was still able to maintain a bit of humor throughout the press conference. He joked that when he told son Oscar he wasn't going to play anymore, Oscar told him it made sense and that maybe Dad should play soccer. Oscar added that he was still excited that Nic Naitanui and Andrew Walker were still playing. Judd said he would continue to barrack for the Blues, but would also have a connection to the Eagles. When asked how he would like to be remembered, he stated, with tongue in cheek, that he would like to be remembered as "... a country boy with a heart of gold. Not being from the country, that's going to make it tricky." The only time he choked up was when thanking the Adelaide fans for their show of respect as he was being stretchered from the ground. He said he has no interest in a coaching or media career, but rather would explore other opportunities, including maybe buying a business.

The tributes came from everywhere with Carlton Head of Football Andrew McKay saying Judd was one of the greatest players in the game; who made huge contributions to the Blues on and off the field, and always had an appetite to improve. “He is a much admired and respected leader at our football club, a teacher and a true professional. While everyone will no doubt laud his career ... those close to him also understand how good a person he is. The contribution Chris has made ... is immeasurable, from his flare on the field to his phenomenal work ethic at training, to his work in the community and for our sponsors - we are immensely proud to have had him on our team." McKay concluded that while it was a sad day for football, it was also a day to celebrate a magnificent career.

Former coach Mick Malthouse saw Judd debut in 2002 when his Magpies played the Eagles. He knew immediately that Judd was something special, as well as a nightmare for opposition coaches, "I remember thinking, I've got to keep an eye on this kid … " and said Judd was the type of player who could influence a team's position in the standings. saying few could do that, but Judd was one of the exceptions. Malthouse continued to follow Judd's career and described Judd as a true champion who "... epitomized professionalism and could change the course of a match ... You just knew ... he could change the course of a game in a split second and maintain that for any length of time ... ". He said he didn't want to rank the best players he’s coached but Judd would be in the top echelon and should also be remembered as a champion off the field. One on field trait Malthouse said he admired most was Judd's ability to fight against being tagged by opposition players throughout his career. Former West Coast coach John Worsfold echoed Malthouse sentiments, saying Judd was a freakish player with his ability and talent and that he hadn't seen too many players who could do what Judd did. He compared Judd to his own former talented teammate Peter Matera, "... they could do similar things ... that super talent that could ... win that hard footy with blokes hanging off him ... then burst out and create something from nothing ..." He said Judd was one who led by example and was an inspiration to teammates, "His leadership was around not saying 'I am the most talented', but ‘look how hard I work and get onboard'."

Judd was the third pick in the 2001 draft, behind Luke Hodge and Luke Ball. Despite his huge talent, the Eagles opted to have him play for WAFL team East Perth in the first round of 2002 against hated rival West Perth. According to a West Perth player at the time who opposed Judd for part of the game, Judd tore West Perth apart. He had a swag of possessions, kicked four goals and was named best on ground. East Perth's coach at the time, Tony Micale, remarked afterward that fans would not see Judd in an East Perth jumper again. West Coast CEO Trevor Nisbett said Judd would be remembered as one of the greatest players ever at the Eagles.

Numerous tweets came through from the football community:
Buddy Franklin: … best player I've seen … well done on everything you have achieved ...
Umpire Brett Rosebury: 3 Votes C Judd: well played … one of the best I have umpired.
Michael Voss: Inspired so many including my own …. #legend
Kane Cornes: …you were impossible to stop but it was an honor every time I had the chance to try. Go well legend
Brett Deledio: Sad day … My favorite player growing up … #posteronmywall #notashamed
Robert Murphy: If any player is going to overshadow my birthday by retiring ... The player we all wished we could be.
Sydney Swans: We'll forgive you for '06 (West Coast defeated Sydney in the Grand Final), but for today only. #Thanks for treating us with such an incredible career
Brisbane Lions: The Gabba will never forget your 5 Goal half in 2003!
Luke Hodge :… a pleasure playing against one of the greatest …
Sharrod Wellingham: Gutted we won't get to see your brilliance on the football field again!
Nathan Jones: One of the greatest ever! ... always wished he was a Demon
(NOTE: When Judd announced he would leave the Eagles, one of the clubs interested was the Melbourne Demons)
Geelong Cats: Too often even two tacklers wasn’t enough. One of the best. #THANKS
Patrick Keane (AFL Media Manager): Congrats to Chris Judd on a career of the highest order. This game was a huge highlight - https://www.youtube.com/watch?v=dlC_1vzg88o …

Judd himself sent out a few tweets:
On his shoulders: ... two shoulder reco's by age 17, and then play 279 games - they've served me pretty well"
On his body: It's been incredibly hard managing my body this year ... relieved to give his body a rest.
2011 his best year at Carlton: That was the closest but the reality was we were still a fair way off as a club.
Hoping the growth continues: We've bottomed out and the growth is starting to come. It's a group filled with really good values.
The 2013 Elimination Final win: the best playing day at Carlton
The 2006 Premiership: head and shoulders above the rest" as a playing highlight.
On joining a club: ... like having a kid: "A part of that football club becomes a part of you."

Carlton will pay tribute to Chris Judd in its last home game for the season, Round 21 v Melbourne at the MCG.