The West Coast Eagles cruised to a relatively easy win over their arch-rivals the Sydney Swans. It was a clash of two teams that have eyes on the Flag this year but there was a clear difference in performance on show between the teams who sit at second and fourth respectively. The Eagles did a lot of the hard yards early but they didn’t have it all their own way as Sydney came back like the champion team that they are. 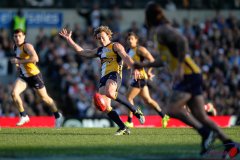 It was a dog fight early in the game with both teams trying to put the opposition off with some tough tackling. The Swans were without their marquee forwards Kurt Tippett and Buddy Franklin who were both out through injury and their absence hurt the Swans on the scoreboard with no major target in the forward line. Sam Reid did a sterling job of presenting up forward but his kicking at goals was abysmal. While the Eagles burst out of the blocks and kicked three straight goals, Reid kicked two posters at the other end.

Sydney went without a goal in the first term but battled on into the second. The Eagles had seven goals on the board - three to Jack Darling - before Adam Goodes scored the Swans’ first after a turnover by the Eagles. The Swans had staunched the blood flow but were finding it difficult to penetrate forward. They flooded back to help the defenders but when they had the ball in hand on the rebound there was nothing forward to kick to and they trailed by 41 points at the half time break.

It could have been far worse had West Coast converted some easy shots on goal in the early stages of the third quarter. The ball seemed to be trapped forever in the Eagles' forward half and Sydney players were tentative in trying to move the ball out. They did not seem to know where to kick the ball and the West Coast defense was all over them in a swarm. Mark LeCras finally gave the Eagles some value for their efforts with an intercept and goal. Josh Kennedy quickly followed up with an intercept goal of his own. 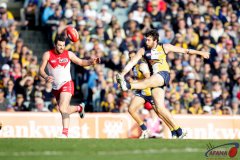 Midway through the quarter Sydney had clearly had enough of being embarrassed and pushed the “ON” button. Isaac Heeney and Brandon Jack were the catalysts with a couple of goals apiece to bring the scores closer but more importantly to give Sydney some pride back. Jamie Cripps and Josh Hill kept the Eagles’ scoreline ticking over with their own goals and it was enough to keep the wolves from the door.

Both teams made their substitutions at about the same time - Scott Selwood came on for Will Schofield (Eagles) and Tom Mitchell for Mike Pike (Swans) and there were fresh legs into the contest. Sydney found another gear and were hitting targets at a 90% efficiency rate. They were prepared to move the football and make decisions quickly and accurately which resulted in two more goals. One of the goals by Lewis Jetta finished with him doing an Aboriginal war dance aimed at the WEst Coast spectators who had been loudly booing his good mate Goodes every time he took a possession.

Sadly for the Swans, they were never going to get closer and the Eagles booted the last three goals of the match to put the clamps on. It was the first time West Coast had beaten Sydney since 2007 and the first time they had beaten a Top Four side this year. Hawthorn is looming in a couple of weeks and that should be the acid test on how far the West Coast might go this year. Sydney  on the other hand are sliding backwards and have some hungry teams ready to take them and their fourth place position on as the season gets to the business end of the year.