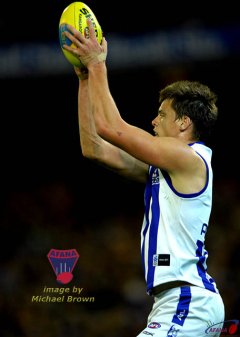 He went on to play 107 games and kicked 59 goals for the Kangaroos. He was named All-Australian in 2007. During his time with North, the club drafted Todd Goldstein and McIntosh mentored the young ruckman. Kangaroo Coach Brad Scott praised McIntosh for his career and his contributions to the Kangaroos. “In his prime, Hamish was as good as any ruckman in the competition. It was a privilege to coach Hamish for a few seasons and he was an extremely popular member of the playing group and wider club.” Scott also said that Hamish and Todd made a great ruck combination which gave the team great flexibility. “Hamish played a very important role in Todd’s football education and really helped shape the player he is today. Hamish should be extremely proud of what he’s achieved in football.”

In early July, North Melbourne defender Nathan Grima announced his retirement, after succumbing to a chronic back problem which prevented him from playing any games in 2015. Grima, 29, underwent a second back surgery during the preseason and now requires another surgery to fuse a disc to alleviate the pain and other symptoms. 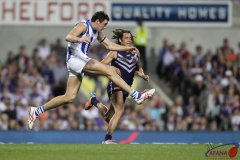 Grima was drafted in 2008 but missed the entire season due to a knee injury and finally debuted the following year. He managed 13 games that year and a career best of 17 games in 2010 and 2013. When fit, he was rated as an elite running defender and often topped the club's preseason time trials. Capable of holding his own against bigger opposition forwards, Grima could read the play very well and was an excellent spoiler when the ball was coming in from down field. The club valued him as a leader on the field and off the field. He was even touted as a possible successor to the captaincy before injury cut him down. With his 86-game career marred with a litany of injuries and surgeries - knees, ankles, fingers, feet and hands - Grima actually missed more games (over 100) than he played.  Grima, who played alongside the now retired Hamish McIntosh, tweeted to his former teammate, "Great career H, got around a couple of rookies on day 1 & been best mates since. Elite when body allowed."

Perhaps Grima's greatest career highlight came in 2013. Suffering a minor foot injury during a match against Essendon, he was moved to the forward line and kicked his first and only career goal in his 73rd game. All his teammates ran in to congratulate him, including Lachie Hansen who ran about 100 yards from defense. The goal and his interviews on-field and in the rooms can be viewed at these YouTube links. They are well worth watching.