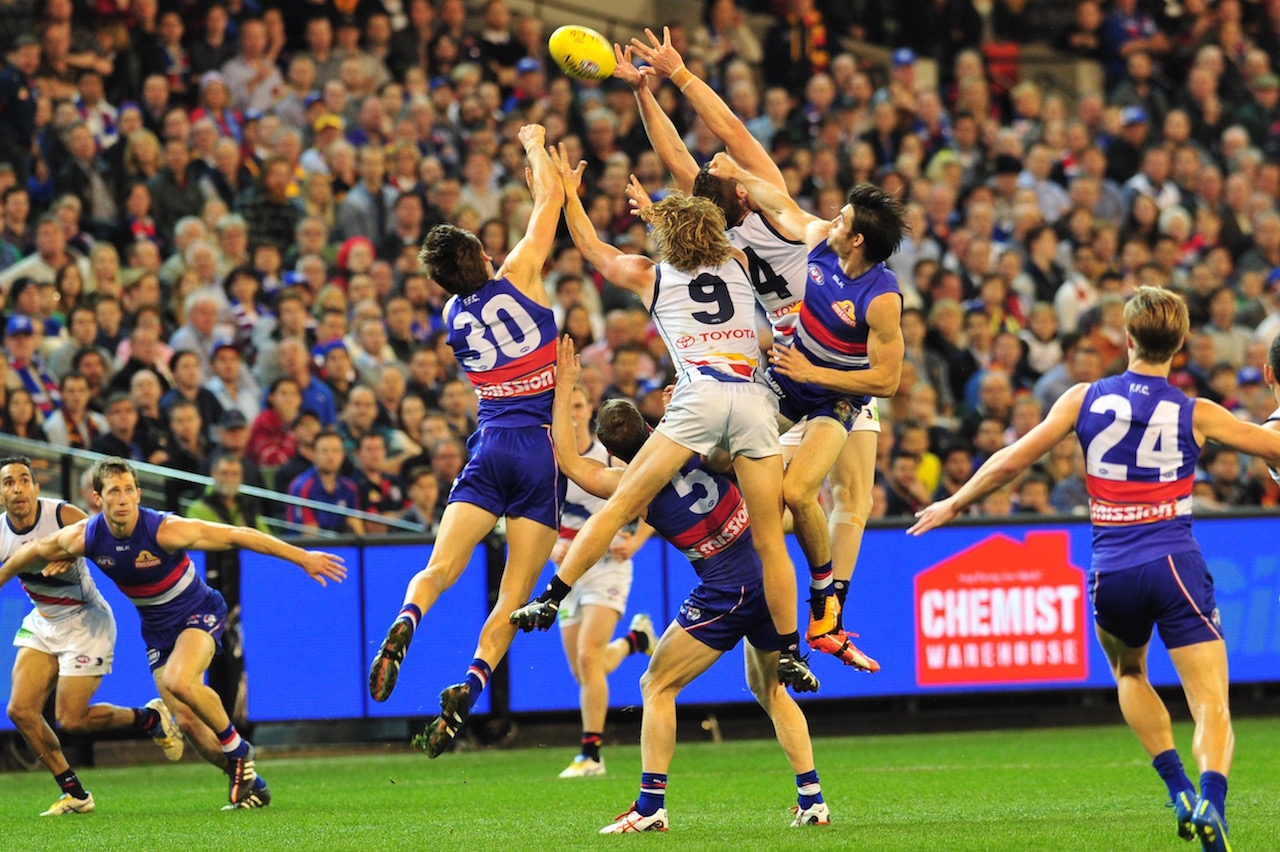 Despite leading most of the statistics that usually result in victory (contested possession, time in forward half, clearances and shots on goal), the Bulldogs let themselves down in front of goal, while their Adelaide opponents nailed crucial shots which turned out to be the difference between living to fight another day or packing the footy boots away for another season.

The Bulldogs started the game in sensational fashion, kicking three goals within the first four minutes as Stewart Crameri, Tory Dickson and Luke Dalhaus all joined the scoring party, stunning the large contingent of Crows' supporters who had made the journey across the border. It didn’t take long for the visitors to turn their collective frown upside down as Adelaide fought back in magnificent fashion, led by the rare skills of resident goal sneak Eddie Betts. When the dust settled on a frantic first quarter of all out attacking footy, the Crows held a nine point lead, with Betts banking three early goals and looking the most dangerous forward on the ground.

Adelaide continued to hit the scoreboard early in the second quarter, Rory Sloane seemingly everywhere for the visitors, while Betts added his fourth goal, prompting Bulldogs coach Luke Beveridge to make changes in an attempt to curb the brilliance of the ex-Carlton small forward. The game became more contested as Adelaide threatened to take control. A brilliant Jake Stringer goal kept the Bulldogs in touch but more missed opportunities in front of goal helped the Crows maintain a narrow eight point half time lead.

If the Bulldog faithful were frustrated with their team’s inability to convert shots into goals in the first half, they would have been beside themselves in the third quarter as numerous opportunities to take the lead went begging. At the other end it was a completely different story as Adelaide couldn’t miss, Captain Taylor Walker leading the way with some top class goals from difficult positions. When Betts bobbed up in the shadows of three quarter time for yet another goal, it looked like the Bulldogs, despite patches of brilliance from Marcus Bontempelli and Dalhaus, were just not going to get the break they so desperately needed. At the final break, Adelaide held an 11 point lead.

The classic contest went to another level as Dickson scored his fourth goal for the Bulldogs within the first minute of the final quarter. While his team mates struggled to find the goals all night, Dickson was the lone Bulldog who had his goal kicking radar on, keeping his team right in an enthralling contest. Scott Thompson nailed a goal for the Crows to have them looking like winners, but there were more heroics to come from the upstart Bulldogs. Incredibly, consecutive goals to Jarrad Grant, Dickson (his fifth) and Stringer had the Bulldogs back in front by eight points midway through the final quarter, and now they looked the more likely team to advance to a semi-final date with Hawthorn. Patrick Dangerfield had other ideas. In a sensational display of clearance football, and after being reasonably held for three quarters, Dangerfield was unstoppable. His hard work was finally rewarded when Walker marked within range for the Crows. Big “Tex” coolly slotted his third goal to have the Crows level the scores with the clock running down. After almost four quarters of an epic final, it came down to an errant handball from the Bulldogs Lachie Hunter as he tried to set up team mate Crameri for the match winner. The ball missed the target, the Crows rebounded and Walker felled his opponent with perfect within-the-rules use of his big frame. The Captain waltzed down the outer wing before spotting up Charlie Cameron just 30 meters out from goal. The young Cameron made no mistake, and the match that had provided a bit of everything now had a winner, the Adelaide Crows.

While the Western Bulldogs would be devastated that they played the game on their terms but were left wanting in front of goal, their players have plenty to look forward to in 2016. As a very young and improving team, the Bulldogs should once again be a contender. Adelaide coach Scott Camporeale was ecstatic with the victory, setting up a semi-final against Hawthorn on Friday night, once again at the MCG. While Hawthorn will start deserving favorites, the Crows will throw everything at them in what should be another absorbing contest.