The tributes flowed in when the news became public, starting with Gillon McLachlan who said “Adam Goodes’ record as a great footballer speaks for itself. There are few in our history with his legacy of football achievements, and he deserves his place as an all time great of the game. Australian football is also fortunate to have had Adam’s leadership, the only person from our game ever named as Australian of the Year, a role model for all Australians, and a passionate advocate for equality for indigenous Australians ... I want to thank Adam for his playing career and his contribution to our game, and for his courage on and off the field.”

NSW Sport Minister Stuart Ayres said Goodes' stance on racism and passionate advocacy for indigenous Australians "is something all of us can learn from". Ayres said Goodes held back his announcement to allow teammate Rhyce Shaw to be chaired off after his own final game. "This probably says as much about Goodesy as anything ... A great player, a quality human being, Adam your noble banner hangs high today."

Victorian Premier Daniel Andrews also paid tribute, saying "the way Adam Goodes has been treated recently was absolutely shameful and I want to congratulate every Victorian and Australian that called out the racism. I don't want that to be the way we remember a Brownlow medallist, a champion, the Australian of The Year, a great footballer and a great bloke."

Former teammate Michael O'Loughlin, whose club record of 303 games was broken by Goodes in 2012, rated Goodes as perhaps the greatest Swan of all time. "That's no disrespect to anyone who has played for us before, but ... the influence and the winning percentage games that he has been able to play, for the longevity. Your superstars play for a long time and he's absolutely one of those without a question."

Coach John Longmire said at the post match press conference that he got a bit emotional but Goodes was fine when making the announcement as he had already made the decision sometime before the match. "(He) just (said) how he's been able to enjoy 18 years .. and the relationships he's been able to establish ... It's probably hard to imagine life without the footy club but he'll be right, he's pretty successful in whatever he does." Longmire touched on the jeering incidents and how Goodes dealt with it all, saying "He's been absolutely superb ... It's been tough but he's managed to come through it really well ... No matter how many great players we've had ... none as great as 'Goodesy' ... He's been an absolute icon of this footy club, and a superstar of the game.”

Fellow retiree Rhyce Shaw said Goodes was one of the greatest people he had met in footy and praised his contributions not only to the club but the community."Adam is one of the great people ... He's done a lot for the Sydney Swans, the AFL and the community at large ... his work in the community's not finished and his legacy will live on forever."

After 117 games and 11 years, Port Adelaide's Tom Logan has retired. 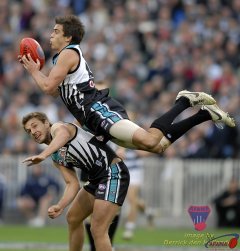 Logan, 33, was originally drafted by Brisbane in 2005 but played just three games for the Lions due to a bad shoulder injury. Delisted at the end of the year, Port Adelaide, ironically the team he debuted against, picked him up as a rookie and he was soon elevated to the senior list, playing the last six games of the year. He could play a variety of positions - midfield, half back or center half forward - but found his niche in defense and quickly developed a reputation for hard work and courage.

In making his announcement Logan said “I love this club and all the boys ... The club gave me a chance 10 years ago, I’ll always be grateful for that and I’ve got so many great memories and friendships ... I just want to thank all the players, coaches, volunteers and fans for their support and I’ll be a Port Adelaide person forever.”

Coach Ken Hinkley praised Logan for his outstanding leadership and team-first attitude saying "Tom is one of the most hard-working, selfless players I’ve coached. He just gives everything he has ... and embodies what Port Adelaide is.’’

Hinkley also acknowledged the contribution of other players who are departing the club, thanking them for their hard work. Mitch Harvey, Sam Russell, Jarrad Redden, Mason Shaw and Johann Wagner were all delisted. Harvey was drafted in 2013. Wagner also joined the club in 2013 as the winner of the TV reality show "The Recruit". Shaw and Flynn were both rookie listed in 2014 and Redden was drafted in 2008. Flynn was recruited from Ireland but quit to return home. Neither he nor the other recent draftees ever played a senior game. Redden played only 16 games in an injury plagued career. Along with these departures, Kane Cornes will also be officially removed from the list after retiring during the season to join the fire department.

The club did resign forward Jay Schulz to a new contract for 2016.

Carlton has delisted Cameron Giles and Matthew Watson, along with rookies Blaine Johnson and Fraser Russell. To date, that is a total of eight departures with the retirements of Andrew Carrazzo, David Ellard and Chris Judd and Lachie Henderson requesting a trade.