While it was the hottest Grand Final in history with the mercury hitting 31.3 degrees Celsius (88.3 Fahrenheit), the much anticipated “close contest” between Hawthorn and the West Coast did not bring the heat many anticipated and - in the case of West Coast supporters - hoped for. In the end, this Grand Final was not a replay of “David and Goliath”. The Hawks entered the match favorites and they won nearly everything - the coin toss, all the important game statistics, the Premiership Cup, the Norm Smith Medal and the full-blown respect of the Australian football public. The Hawks' players were never challenged in a master class performance of Aussie Rules football. Alastair Clarkson and his coaching staff cemented a well-earned place in history as the Hawks won the “three-peat”, back to back Premierships in 2013 (defeating Fremantle), 2014 (dominating over Sydney) and now in 2015. No doubt West Coast fans are wondering what happened and how their break out season ended so lamely.

West Coast started with a burst. Luke Shuey kicked the first goal in the opening minutes and looked lively. But the Hawks galvanized themselves quickly and the famous Eagle defensive “Web” was breached quickly on the wide MCG. Once the Hawks were through the Web, they attacked at will. Cyril Rioli appeared to have no opponent. His brilliance tore the Eagles to pieces and inspired his team mates. Rioli kicked two goals and one each to Ben McEvoy, Grant Birchall and Brad Hill put the Hawks well ahead at the quarter break. The meek Eagles were only able to add five points to Shuey’s goal and looked miles off the pace. 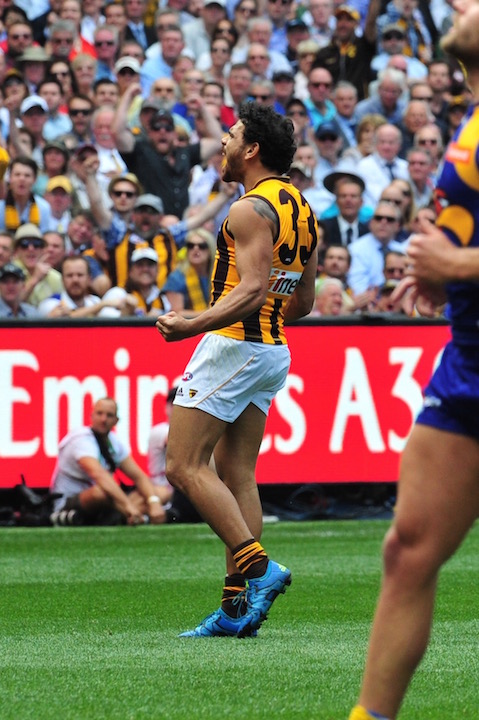 Hawthorn attacked the second quarter with the same composure and calm intent. There was no “unsociable” play as they went about executing politely ruthless football. The first goal was theirs, an absolute gem from Captain Luke Hodge deep in the forward pocket, and more followed from Jack Gunston (two) and Isaac Smith (one). West Coast players were completely at sea, fumbling possessions and fighting off three Hawks at every contest. The Eagles’ efforts in front of goal were wasteful. While Josh Hill slotted a goal and Elliot Yeo managed a late one just on half time, the scoreboard was damning at the break. The 31 point margin was deflating for all in the Eagles’ camp and only a miracle was going to salvage the game.

Hopeful fans postulated that the Hawks would fade in the heat and the Eagles would finish strongly so when the third quarter began all eyes were focused on the West Coast. And they did throw down the gauntlet early in the term. Jack Darling and Mark Hutchings kicked goals and at one point the margin was back to four goals. However pivotal opportunities went begging with dropped marks and poor goal shooting costing West Coast any chance of a comeback. They simply could not put any pressure on the scoreboard and any chance they may have had went begging. Sensing the glimmer of a revival, the Hawks’ seasoned campaigners shifted back into gear. Gunston kicked two more goals and Smith dazzled with another brilliant finish before Ryan Schoenmakers and substitute Matt Sucking joined the fun. At the final break, the Hawks led by 50 points and it was a complete annihilation with one more quarter to survive for the disappointing West Coast.

A three goal to two goal last quarter was the only West Coast win for the day and did nothing to soothe an ego-bruising defeat in front of a 98,632 strong crowd. The Hawks were sublime in their dismantling of West Coast’s midfield and defense. Experience was on their side but it was more than that. Apart from some individual brilliance by Norm Smith Medal winner Cyril Riolo, this was a consummate team performance. The defense was superbly led by James Frawley, Brian Lake, Grant Birchall and Shaun Burgoyne who kept the twin towers of Josh Kennedy and Darling ineffective for the whole match. Sam Mitchell and Hodge were unstoppable marshaling the midfield and the forward line was impeccable with the likes of Gunston, Smith and Roughead kicking accurately and pressuring the West Coast defense all day. Rioli's inspiring performance won him the Norm Smith Medal as the best player of the day.

There were some Eagles who can hold their heads high. Shuey and Andrew Gaff tried hard and backs Jeremy McGovern, Sam Butler and Brad Sheppard were terrific under four quarters of extreme pressure created by Hawthorn’s midfield dominance. For the West Coast there will be much soul-searching. Coming from ninth place in 2014 many may feel that 2015 was a success, not the ultimate but good enough. Sadly an insipid display like the one they produced on Grand Final day does not inspire confidence. Whether the explanation is the youth of the team, not enough games on the MCG or mental fragility, there were far too many West Coast players who went into hiding on the big stage and Adam Simpson will spend a lot of time over the pre-season searching for answers and taking a hard look at his personnel.

The Hawks “three-peat” also poses questions. Can this group win a fourth consecutive Flag? With only ruckman David Hale a probability to retire, there is no reason why this professional and highly-skilled team can’t get it done again. Or is age going to catch up with them as the "oldest" side ever to win a Grand Final. Is Alastair Clarkson now one of the true coaching greats? That is a rhetorical question, of course he is. Is the AFL’s equalization policy - developed to make the competition more even and to stop the long term dominance of individual clubs working? It would seem not. How nervous should the 17 other clubs be about Hawthorn in season 2016? Very, but what a pleasure they are to watch!

Well done Hawthorn, congratulations on making history and producing one of the most clinical and flawless displays of football in recent times.