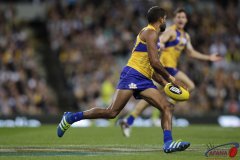 In the first two minutes, the Tigers showed good defense and cleared a stoppage with a chain of accurate deliveries, to score a fine goal via Kane Lambert. However, this sparked the Eagles into life and their midfield responded by applying pressure on Richmond whenever the Tigers approached the ball. West Coast’s Nick Naitanui did not have it all his own way in the ruck. The Tigers reserve ruckman Shaun Hampson offered a solid contest, in the absence of regular ruckman Ivan Maric; but the Eagles’ rapidly improving second ruckman, Scott Lycett, also competed well at bounce downs and took marks around the ground. The Eagles began to dominate play, and by the end of the first quarter, had entered their attacking zone 20 times to score 6 goals 8 points. Richmond struggled to make only make four attacking entries and scored just two solitary goals by the first break.

From there, the situation rapidly deteriorated for the Tigers. The Eagles’ sharp shooter, Mark LeCras, scored within three minutes and West Coast totally dominated the rest of the quarter by keeping the ball in their attacking zone 80% of the time. The zone pressure applied by the West Coast midfield forced the Tigers into making numerous errors. It was only the Eagles wayward goal kicking that stopped the margin from blowing out further. Richmond scored only 1 goal and 1 point for the quarter. West Coast out marked and out ran Richmond. There were several times Richmond players emerged from defense, only to find they had nobody in front of them to receive the kick. Such was the total dominance of West Coast. By half time, they had made 36 attacking entries to Richmond’s eight. Andrew Gaff, Elliot Yeo and Luke Shuey were creative in the midfield and relished the chance to step up, in the absence of Matt Priddis who was unable to play due to general soreness. Richmond’s best player, Alex Rance, marked well at full back and mostly had the better of Josh Kennedy who still managed a goal in each of the last three quarters.

The third quarter saw a Tiger resurgence, led by Edwards who kicked long to Sam Lloyd, who scored at 48 second mark. Lambert then sent a long kick from the center to Reiwoldt, who marked and added another goal from 40 meters. Mark Hutchings steadied the Eagles with a goal before Richmond forward Daniel Rioli showed some magic by slipping an Eric McKenzie tackle, going to ground; and then bouncing to his feet to score his second goal for the match. Kennedy and Shuey both added goals for the quarter to negate Richmond’s efforts. For Richmond, Jack Reiwoldt battled hard all over the ground and took some strong marks. Jeremy McGovern read the play well for the Eagles in defense and held up several promising Richmond attacks.

The Tigers continued to run in the last quarter but were outscored by the Eagles 5 goals to 3. Jack Darling provided a clear forward avenue for the Eagles and Shuey gathered 22 possessions for the game, achieving an astounding 95% efficiency with delivery. Gaff was the dominant Eagle in the middle with 33 possessions. Trent Cotchin tried hard in the center for the Tigers, as did Dustin Martin, but they lacked support.

Next week, West Coast travel to Sydney to face the revived Swans. They will need to work on their goal kicking accuracy if they are to beat the Swans at the SCG. Richmond will meet Melbourne and then Port Adelaide. They will be hoping for two consecutive victories at the MCG. The alternative is unthinkable and would throw the club deep into crisis.