Submitted by chris kowald on Mon, 05/16/2016 - 4:55 AM EDT
Chris Kowald reporting for AFANA from Domain Stadium in Perth, Australia 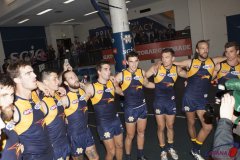 The other - offers meek resistance and is easily brought down to earth. The aggressive species controls Domain Stadium. The other is only seen east of the Nullabor plain.

Prior to Sunday, Saint Kilda had been making steady progress. Courtesy of a systematic rebuild, they had delivered some solid performances. They had defeated Melbourne and Collingwood and had almost beaten Hawthorn and North Melbourne. Their confidence was growing. But after 26 minutes of sustained attack, the Saints were torn apart by an Eagles team intent on proclaiming they still possessed the hunger to make the Grand Final. The repeated assaults began at the center bounces, where Nic Naitanui dominated in the air and the Eagles' midfielders of Matt Priddis, Luke Shuey, Chris Masten, and Andrew Gaff repeatedly satisfied their voracious appetite for leather. Their work in the middle was clean and direct; such that the Eagles dominated the clearances 12 to 1 in the first quarter. Ominously, the first clearance ended with Josh Kennedy who kicked a goal for the Eagles within the first 45 seconds. Priddis had ten first-quarter possessions and the Eagles had made 20 entries into their attacking zone, while St Kilda could only scramble three. By the 26 minute mark the Eagles had kicked nine unanswered goals. Kennedy had kicked five, which was ultimately two more than St Kilda managed for the whole afternoon. The carnage mercifully halted at the 27 minute mark, when Jack Steven scored St Kilda's first goal. The siren to end the first stanza could not have come soon enough for St Kilda coach Alan Richardson; who sat stunned as his Saints folded under the Eagles onslaught.

In the second quarter, St Kilda ruckman Tom Hickey began to compete more aggressively with Naitanui. The Saints started to match the Eagles in contested possessions and clearances from stoppages. They showed some determination and pride in their performance. The West Coast defenders still controlled the center corridor and forced the St Kilda attacks wide. When the Saints did gain possession in their forward zone, they were either on a difficult scoring angle, or missed simple shots. Saints captain Nick Reiwoldt, who had worked his heart out to inspire his team, was the worst offender. He missed two very gettable goals to waste two solid attacks. The Eagles, on the other hand, found marks in their forward area easier to grab. The Eagles tall players too, were pushed wide by the strategic positioning of the St Kilda defenders. The Saints had slowed the Eagle scoring, but were unable to kick a second goal during the quarter to finish the half with an embarrassing one goal and nine behinds.

Rain showers in the second half had made conditions on the ground slippery, and the Eagles adapted better. The St Kilda runners, Leigh Montagna, Sebastian Ross and Jack Steven won plenty of the ball in the midfield. They set up chains of handpasses but found the Eagles defense led by Eric McKenzie, Sam Butler and Shannon Hurn virtually impregnable. St Kilda wasted many kicks while the Eagle kicks were more damaging and usually found their man. Josh Bruce did add a second goal for St Kilda but it was their only score in the third quarter.

In the final quarter the Eagles re-asserted their midfield authority and booted five goals, despite stubborn defense from St Kilda backmen Shane Savage, Sean Dempster and Jack Billings. St Kilda scored their third goal after a determined and skillful effort by Maverick Weller. To put this in context, West Coast's veteran small forward, Marc Le Cras, finished with six to his name. There is no hiding the fact that St Kilda were soundly thrashed. Embarrassingly so.

To recover, they will need to erase the worst of their memories of this trip west. They return home to play Essendon and would be expected to win next week; provided they can overcome their deep mental scars. The Eagles rested their better players in the last quarter, to prepare them for a six-day break before flying east to meet Port Adelaide. Their trip to Adelaide is crucial. They need to prove that they can win away from home if they have any hope of a top four finish in 2016.