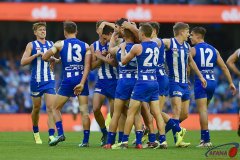 Port Adelaide stamped themselves as genuine contenders by defeating the highly fancied Swans at the SCG while the Adelaide Crows bounced back to thump the Tigers in a complete reversal from Grand Final day in 2017.  A raft of upsets has turned the AFANA Power Poll on its head this week, so read on to see which teams made the biggest moves…

1.    Greater Western Sydney Giants (Last week - 1)
The Giants didn’t have it all their own way against a determined Collingwood at the MCG on Saturday, but the class of Stephen Coniglio, Callan Ward and young Lachie Whitfield led the Giants to their second win in as many starts. A broken ankle to running machine Tom Scully was a sad footnote to an otherwise great day.

2.    Port Adelaide Power (3)
The Power moves into second spot on the appropriately named Power Poll, with a sensational win in Sydney against the highly vaunted Swans. To win in Sydney without key ruckman Patrick Ryder is a massive confidence booster for a team that struggled to topple the best teams in 2017.

3.    Adelaide Crows (6)
After a week of heavy media scrutiny regarding a contentious preseason camp, the Crows took an injury hit squad into the home game against reigning premiers Richmond, with many wondering whether it could topple their Grand Final conquerors. Not only did the Crows beat an uncharacteristically poor Richmond, they did it despite losing key midfielder Matt Crouch during the game with a hamstring injury. This was a win full of character.

4.    Sydney Swans (2)
Sydney ran into a red hot Port Adelaide in what was a very good game of footy in slippery conditions at the SCG. The Swans held a seemingly handy 14 point lead at the half but could not match the fierce work of the Port midfield in the second half. The usually reliable Swans backline was picked apart by the Power while Lance Franklin played a lone hand as the only multiple goal kicker (4) for Sydney.

5.    Geelong Cats (4)
The Cats hold on to 4th spot despite going down to the Hawks in a one-point thriller on Easter Monday. With the super midfield trio of Patrick Dangerfield, Joel Selwood and Gary Ablett Junior sharing the field for the first time after Dangerfield missed round one, the crowd was treated to some stellar football from both teams. The Cats desperately missed key back man Harry Taylor who joined Lachie Henderson on the sidelines as both recover from injury, as Hawk star Jarrod Roughead proved a handful in attack.

6.    Hawthorn Hawks (9)
The Hawks are the big movers into the top five this week after a magnificent win over Geelong at the MCG. The Hawks thoroughly deserved the win as they had 19 more entries inside the 50 meter arc than their adversaries, and controlled the game until almost being overrun by an inspired Geelong. Midfielder Tom Mitchell was best afield for the second week running with 40 possessions to back up last week’s record 54 touches.

7.    Melbourne Demons (7)
Flashes of brilliance from small forward Jeff Garlett who finished with four goals was enough to help the Demons run out 26 point winners, despite a scare from a plucky Brisbane Lions who tied the score in the last quarter after a flurry of goals. A solid five goal haul from Jesse Hogan plus a midfield masterclass from Clayton Oliver (35 disposals, 8 tackles) has the Demons back on track after a heartbreaking loss to the Cats in round one.

8.    Gold Coast Suns (11)
The Suns finally have something to cheer about as new coach Stewart Dew seems to have the struggling franchise trending in the right direction. Two wins from two starts would please the AFL and more importantly could be a springboard to retaining top talent such as full forward Tom Lynch, who kicked eight goals against a disappointing Carlton on Saturday afternoon.

9.    West Coast Eagles (12)
The Eagles dominated the Western Bulldogs on the back of two six-goal quarters to run out comfortable 51 point winners. Despite being eased back into football with limited game time after an ACL reconstruction, athletic ruckman Nic Naitanui has looked magnificent, combining with new talent such as the dynamic Liam Ryan to give the Eagles some renewed hope in 2018.

10.    Richmond Tigers (5)
The Tigers looked a shadow of the team that took out last season’s premiership cup, with only Brownlow medalist Dustin Martin offering any resistance to a rampaging undermanned Adelaide Crows. All-Australian full back Alex Rance was dominated by the much maligned Josh Jenkins as Richmond went down by 36 points. A tough task against the in-form Hawks will give us a better idea of where the Tigers are at.

11.    Essendon Bombers (8)
The Bombers blew a golden opportunity to go 2-0 as they traveled West to meet the Fremantle Dockers at Optus Stadium on Saturday. The return of key midfielder Zach Merrett failed to ignite the Bombers who once again failed to cope with the trip to Perth, losing their fifth game in the last six match-ups against the Dockers.

12.    Fremantle Dockers (17)
The Dockers get a big boost in the poll due to a combination of a gutsy win combined with some awful performances by the teams below. Essendon was fancied to topple the Dockers at Optus Stadium but once again the purple haze prevailed on the brilliance of midfielders Nat Fyfe, Connor Blakely, Lachie Neale and Stephen Walters. The latter laid eight tackles in a sterling performance from the forward turned midfielder.

13.    North Melbourne Kangaroos (18)
The Good Friday contest between the Kangaroos and Saint Kilda will not be one for the video library, but success starved North Melbourne fans could not care less. Key Forward Ben Brown booted six goals in a comprehensive 52 point win over a terrible Saint Kilda. The first half of football was almost unwatchable due to the skill errors by both teams, but seven unanswered goals to the Kangaroos gave a glimpse of what they can do at their best.

14.    Collingwood Magpies (15)
Coaches will tell you there is no such thing as an honorable loss, but truth be told the Magpies gave a solid showing against one of the league’s powerhouse teams. Playing the second half with just two fit men on the bench, the Magpies took the lead in the final quarter through gutsy performances by Brodie Grundy, Scott Pendlebury and Tom Phillips. The class of the Giants won out, but the Magpies won a few fans through sheer work rate.

15.    Brisbane Lions (16)
With an average age of just on 24 years old, the Lions took the game right up to their more experienced Melbourne opponents before fading late, eventually going down by 26 points. Young stars Alex Witherden, Lewis Taylor and Hugh Mcluggage showed plenty of promise for a team that will pinch some wins off more fancied opponents once they gel as a team.

16.    St Kilda Saints (10)
The insipid performance by the Saints on Good Friday led one club member to take to his membership card with a blowtorch on social media in disgust. Whilst such a response may be a tad harsh, the Saints nonetheless looked inept in giving up seven consecutive goals in the final quarter against the Roos. A round three meeting with a red hot Adelaide Crows demands a much better effort.

17.    Carlton Blues (13)
The Blues showed some promising signs against the reigning premiers in round one, but came crashing back to reality against a more committed Gold Coast unit that looked the better team from the opening bounce. Carlton was loose with the ball and missed targets by hand and foot way too often, and must have some concern over young gun Jason Weitering who has looked out of sorts early in 2018.

18.    Western Bulldogs (14)
The team that won the 2016 premiership is no more. While it can be argued that the Bulldogs have a lot of quality on their injury list, they seem bereft of the manic pressure and solid game plan that led them to the 2016 flag. We are only two rounds in, but the Bulldogs need to find some form and find it fast, otherwise coach Luke Beveridge will be feeling the heat in the coming weeks.