The West Coast Eagles continued their strong early season form by demolishing the Gold Coast Suns. The Suns have a tough start to the year. Their home ground at the Gold Coast, is being used for the British Commonwealth Games for the first half the season, so they have to stay on the road. With two consecutive games in Perth (Fremantle and then West Coast),

the Suns tried to reduce their travel load by remaining in Perth between the two games. However, the strategy to keep the Suns fresh in the West appears to have failed miserably. 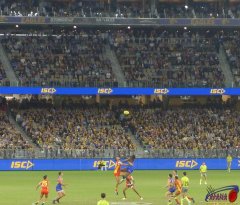 From the first bounce the Eagles meant business. They launched three attacks within the first two minutes, with the third culminating with a pass from Josh Kennedy to Scott Lycett who marked and slotted the first goal. A few minutes later Jack Darling used his strength to push away Kade Kolodjashnij and dribble a goal from five meters. Then Kennedy got in the act to kick a goal for himself, the first of five for his first game of the year. The Eagles pushed players to the contest so that in most instances the Suns were outnumbered and the ball finished in Eagle hands. In the second half of the first quarter the Suns fought back with quick ball movement into attack and goals to Tom Lynch, Andrew Swallow and Aaron Young. A minute before the first break a Suns hack out of a pack deep in defense landed in Eagle Chris Masten’s arms. Thirty meters from goal, the veteran made no mistake with his shot.

The second quarter was all Eagles. Eagle ruckman, Nic Naitanui, outpointed Jarrod Witts in the ruck and Andrew Gaff, along with Dom Sheed, gave the Eagles plenty of drive from the midfield. For the Suns, none tried harder than David Swallow and Jarryd Lyons. Aaron Hall did some useful work around the ground but the Eagles always seemed to outnumber the Suns at the fall of the ball. Under continued pressure the Suns made simple errors. The resultant turnovers were shot into the Eagles forward line where a host of forwards led by Kennedy and Jack Darling could swoop on the ball. An eight goal second quarter left the Eagles in a commanding position.

Jamie Cripps kicked the Eagles’ first goal after the main break, but then the Suns fought back by using run and quick handballs to work long kicks into attack. Lynch, Brayden Fiorini, Alex Sexton  and Jack Martin all found the big opening, but their efforts were dampened with goals from Mark LeCras and Kennedy for the Eagles.

The Eagles found their mojo again in the final quarter booting six goals to Gold Coast’s one. Urged on by a home crowd of 51,000 the Eagles outplayed the dispirited Suns to turn the match into a fitting celebration of LeCras’ 200th game and Naitanui’s long awaited 150th. Elliot Yeo had one of his finest outings for the home team and veteran Chris Masten showed he still has plenty to give. Jeremy McGovern read the ball well to mark strongly in defense. Jamie Cripps was damaging in attack for the Eagles and finished with a career-high four goals.

For the Suns, Lachie Weller chimed in with some good work and Jack Martin was all class when he got hold of the ball. Tom Lynch did well to kick three majors (goals), but veteran Michael Rischitelli appears out of form. If it was not for the work of Swallow, Hall and Lyons, the result would have been far worse for the Suns.

Next week the Eagles travel to the MCG to meet Carlton. The Eagles will have a golden opportunity to score a rare win at the ‘G’. Gold Coast return to their home state to meet the Brisbane Lions at the Gabba, in what should be an even contest.