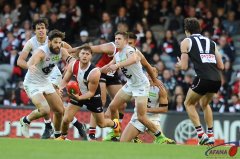 St Kilda's night started ugly. A scrambled kick into the goal square rushed over the line in a tackle. They made amends minutes later through Rowan Marshall, the big NZ born forward kicked the first goal for the night with a contested mark at the top of the square. His kick a little off the side of the boot went just inside the right post. Membrey added the Saints second. Marking in the pocket just inside 50, his long kick was straight and accurate.

Cripps missed his first set shot at goal from 55 meters to get the Blues on the board, but he then bodied his way to the front of the pack to mark and made no mistake with his second shot from 40 meters out halfway through the quarter. A pressured switch in the Carlton backline saw the ball picked off with a diving mark to Newnes. He also made the most of the roof-on conditions and kicked it straight through from 45 meters out.

Carlton bit back when OBrien took the ball and dished out a nice handball to Daisy Thomas who made no mistake on the run. The Blues then had Kennedy bring the margin back to a point, marking on the lead and clearing the defenders on the goal line. Hickey dominated in the ruck, more effective around the ground if not in the center. While Carlton's on-ballers, particularly Cripps, were better than St Kilda's in the first quarter, they could not match the Saints around the ground.

Greshams mobility through the middle paid off after his previous solo run went wide. His pass into Lonie drew the free kick from the Carlton defense and Lonie's kick taking the Saints another six points clear. Garlett had a chance just before the siren to goal but the checkside kick went the wrong side of the goal post to leave the Blues trailing by eight points at quarter time.

St Kilda needed to keep their nose in front and Membrey kicked his second for the night to get the scoring in the second quarter underway. Sinclair followed up quickly with another goal for the Saints after roving the front of the contest and snapping on the right.  Harry McKay excited Carlton fans (who have been calling for the inclusion of the big young gun into the team) running onto the ball ahead of his opponent at the top of the 50 but his snap hit the post. Play had congested into St Kildas forward half and eventually the momentum was unstoppable with Billings kicking a great stoppage goal roving and drilling the ball home. The Saints inevitably drawing away from the Blues as the quarter rolled on.

Curnow marked from a long kick from the ruckman at the center circle, he dished the ball inboard to Zac Fisher who ran past defenders and goaled on the run in another good sign for struggling Blues supporters.  St Kilda quickly pulled that one back from a stoppage close to goal with Steele kicking his first goal for the night. Probably the most remarkable moment of the quarter was when Carltons Charlie Curnow marked and then causally played on, wheeling around on his right and launching a big goal from outside the 50 meter arc, uncontested late in the quarter.  At halftime the Saints had pushed out to a 23 point lead mostly by better ball use and capitalizing on their forward 50 stoppages.

A deliberate snap from the pocket resulted in a great goal to Jack Billings and started the Saints on their way in the second half, he followed up with an assist a minute later, dishing the ball to Newnes at the top of the square so he could kick his second for the night. Jarrod Pickett was taken high in the forward pocket and kicked a much needed goal for the Blues. But their wins were few and far between. Jack Steele took the advantage to play on from the boundary in St Kilda's forward flank and kicked long to the top of the square, Membrey got to the front and marked. He converted the easy shot for the maximum six points.

Jack Steven was perhaps a little lucky to receive a free kick for front on contact from Cripps who came back with the flight of the ball. But it was all skill for him to slot home the goal from 48 meters out. Carlton managed to halt the bleeding for a few minutes, but again the ball bounced around St Kilda's forward line before eventually finding Jack Steven at the top of the 50 and he set sail for home on the run with another goal the result.

Lonie for St Kilda on the run in the pocket, hit Marshall on the lead with a nice short pass. Tight in the pocket he banana kicked the goal from the boundary. Their six goal to one quarter blew the Blues out of the water and had they kicked more efficiently up forward the difference might have exceeded ten goals. Kreuzer left the ground during the quarter and was taken treated by paramedics. He had a shortness of breath and difficulty breathing.  Reports from the club are that he is otherwise OK which will be some relief to the Carlton faithful who have watched his tough run with injury throughout his career.

The margin of 54 points going into the last quarter would be a mountain too big for Carlton to climb but could the Saints drive home the advantage? The Saints worked the ball forward and the Carlton defenders were loose. The ball was passed around and in the end it was Maverick Weller with the set shot and goal. Both sides tried to maintain possession with a lot uncontested footy on display, but this only seemed to allow defenders to setup and the finishing was poor with both teams scoring only behinds through much of the final quarter.

As with most of the night though the Saints found a way to hit up their team mates on a lead.  On this occasion it was Newnes for his third goal of the night to take the margin out to 68 points. Kade Simpson was the unlikely goal kicker for the Blues in the last quarter, his first for the year and the last goal for the night.  He was taken high 30 meters out from goal as the Saints tried to stop a rare Carlton push forward. In the end a 64 point win to the Saints, their third win in four weeks, showing some of the promise that many thought they possessed prior to the seasons start.