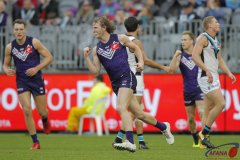 but endured injuries to Patty Ryder and Robbie Gray. Hawthorn didn’t fare much better, getting steamrolled in Tasmania by an improving Brisbane, leaving its finals chances in the balance.

The match of the round was a brilliant tussle between Sydney and North Melbourne, with both teams swapping the lead throughout the final quarter until some Lance Franklin magic got the Swans home by just six points. Other winners were Melbourne, Saint Kilda and Essendon, while Carlton and the Gold Coast added another loss each on the ever increasing pile.

The losses to Collingwood and Port sees the Tigers barely hang onto top spot on the AFANA Power Poll, but there has been plenty of movement down the list.

1.    Richmond Tigers (Last Week: 1)
The Tigers had enough of the ball in a wonderful game of football at Spotless Stadium, but poor finishing cost the league leaders victory as they kicked a poor 10.17 in losing by just two points.

2.    West Coast Eagles (4)
The Eagles were magnificent in winning in Melbourne yet again, this time against a formidable opponent in Collingwood. After a sluggish start, the Eagles were led to a famous victory by defender Jeremy McGovern who repelled numerous Magpie attacks. The 35 point win came despite losing ruck man Nic Naitanui to a potentially serious knee injury.

3.    Collingwood Magpies (2)
Collingwood drops to third on the power poll after failing to register a win against a top level opponent once again. The brilliance of Jordan De Goey and Scott Pendlebury was not enough for the Magpies who are yet to stamp their authority on any serious Premiership claims.

4.    Sydney Swans (6)
Sydney continued its hold over North Melbourne at Etihad Stadium on Sunday, winning a classic duel by just six points on the back of two late Lance Franklin goals. The win was even more meritorious given the Swans injury list, compounded by the loss of Josh Kennedy during the game.

5.    Melbourne Demons (8)
The Demons are the big movers this week, up to 5th after destroying the Bulldogs by 50 points on Saturday at the MCG. Max Gawn continued his stellar season in the ruck, and is some chance to be the first ruck man to win the Brownlow medal since Adam Goodes in 2003.

6.    Port Adelaide Power (3)
A week after stamping its credentials for a top two finish, the Power completely fluffed their lines in losing to a depleted Fremantle Dockers at Optus Oval on Sunday. In a scrappy, error riddled affair, Port Adelaide put in a simply terrible performance that could have serious ramifications in regard to its finals claims. Patty Ryder also suffered a hip flexor injury to further sour a dirty day out.

7.    Geelong Cats (5)
Geelong had its moments in a fierce contest on Thursday night at Adelaide Oval, but in the end couldn’t overcome a fast finishing Crows who fed off the emotion of a big home crowd starved of success in 2018. Ex-Crow Patrick Dangerfield was brilliant for the Cats.

8.    Greater Western Sydney Giants (9)
The Giants home victory over first placed Richmond was impressive enough, but considering the fact that they did it without Tom Scully, Jeremy Cameron and Jonathon Patton – the two point win was even more meritorious. The Giants are not done this season.

9.    Hawthorn Hawks (7)
The Hawks missed a golden opportunity to establish their finals credentials when they took on the upstart Lions in Tasmania. Trailing by just eight points at three quarter time, the Hawks were blown away by the young Lions, eventually crashing to a 33 point loss. Doubts remain whether the Hawks can go all the way.

10.    Adelaide Crows (12)
The Crows had a pretty good week in what has been a horrendous season. First, they re-signed gun midfielder Rory Sloane on a five year deal, then continued the celebrations by defeating Geelong in front of 46,000 excited fans. I still think they miss the finals.

11.    Essendon Bombers (11)
The Bombers defeated the Suns by 44 points in an uninspiring contest at Metricon Stadium. Michael Hurley and Devon Smith were sensational for the Bombers, who still look to have left their run too late to play in the finals.

12.    North Melbourne Kangaroos (10)
North Melbourne is a tad unlucky to drop a couple of spots this week, however the loss to Sydney, by just six points, is still an opportunity missed. Kangaroos Captain Jack Ziebell was sensational with five goals in a best afield performance.

13.    Brisbane Lions (13)
The Lions win over the Hawks in Launceston was its third in a row, as Chris Fagan’s team start to deliver on the promise of their young and talented list. Number one draft pick Cam Rayner showed off his talent as the 18 year-old kicked three goals to go with his 19 possessions.

14.    Fremantle Dockers (16)
Fremantle might have had nothing to play for in terms of the end of the season, but despite missing its best player in Nat Fyfe, the Dockers fought tooth and nail to defeat a distraught Port Adelaide in an ugly game of football. The local fans didn’t care in the least as Ross Lyon’s young charges held their nerve to stave off a late Port comeback.

15.    St Kilda Saints (15)
The Saints have looked better of late, taking down the struggling Carlton by 64 points at Etihad Stadium. It was the three Jacks – Billings, Steele and Steven who led the way for the Saints who now turn their attention to the Tigers – in a game they thumped the eventual premiers by 67 points last season.

16.    Western Bulldogs (14)
The Bulldogs struggled for the second week in a row, allowing seven unanswered goals against Melbourne to eventually go down by 50 points. It’s all about 2019 for the Bulldogs now.

17.    Gold Coast Suns (17)
The Suns are limping to the 2018 finish line, this time going down big to Essendon at home. The Suns once again were competitive in the first half, actually leading at the main break, before failing to match the Bombers in contested possession around the ground.