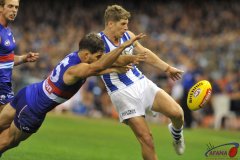 I just went out and played. It wasn't until that next week when I was really bad ... I went into the doctors ... we had a scan result come back that suggested that I did have changes to my brain ... it was pretty tough to take. I've taken hits, come back ... strong, but to have someone say there's been changes to my brain and they can't really tell you what they are, they're just there, it's tough."

In an interview in May on Fox Footy's "On The Mark", he said it was difficult to concentrate for more than 10 or 15 minutes. He went on to say, “It’s a day-to-day thing. Some days I wake up and I’m pretty clear and then I try do a little bit of exercise and as soon as my heart rate gets up, I just get a real chronic headache and pretty dizzy." He has been unable to train, and even walking up stairs at the club proved arduous. He is still dealing with dizziness and headaches and has been virtually housebound since the incident when he and Brisbane's Mitch Robinson collided head on. He also described a head clash with Melbourne's Angus Brayshaw (who wears protective headgear) last year, "I wasn't knocked out ... but it felt like a bomb had gone off. I couldn't hear anything ... for about 10 to 15 minutes I had ringing in my ears. I quickly ran off ... but then something happened on the field. There was a quick sub that had to be made, so I just ran back out but I had no balance. I was leaning to one side where I'd been hit and was about to fall over, so I knew something was pretty bad then."

In a statement at the club's website, Stevens said, “This decision has taken me a long time ... Football has been a huge part of my life ... and I do recognize how lucky I have been to play professionally ... after lengthy consultations with my family and on the advice of doctors, I’ve made the extremely hard decision that I cannot risk my health and future for the game. I’m so grateful for the support of the entire St Kilda Football Club, particularly the medical and player development staff who have been extremely supportive ... ". He concluded by thanking teammates and coaches at the Saints and his previous clubs and his friends and family. He has also had to put his university studies on hold until he recovers.

Coach Alan Richardson said the club would continue to support Stevens, “Koby quickly earned the respect of his teammates ... and became a much loved member of our group. He is a high quality person who is enormously respected by everyone  ... When we were at our best last season he was a huge driver of our midfield group, with his attack on the ball and the opposition ...".

Stevens was initially drafted by West Coast in 2009 and played 11 games with the Eagles before requesting a trade to the Bulldogs at the end of 2011. He played a further 62 games with the Bulldogs from 2012 to 2016. In 2016, an abdominal injury sidelined him for two months. He played a few games including the last two rounds before being dropped. He returned to the VFL to play in Footscray's premiership win, but missed out on being a part of the senior team's premiership triumph. At the end of 2016, he again requested to be traded to seek more opportunities and declared the Saints his preferred destination. He has played 17 games for St Kilda.