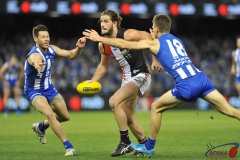 Despite showing some promise in the midfield with the Casey Demons in the VFL, Balic said he no longer had the passion to play ... "It was an easy decision ... as I’ve thought about it for a little while now,. It’s something I’m not going to regret and I’m very appreciative to Melbourne for letting me come to the club for a second chance. I’ve always loved football, but my heart’s not in it and everything ends up being a grind ... The [club’s VFL and AFL) teams are both going to be successful this year and it’s something I’d love to be a part of if I loved it, but unfortunately I don’t ... ". He had also spoken publicly about dealing with mental health issues.Melbourne's football operations manager Josh Mahoney said it was the right thing for Balic to retire, “AFL football is a tough and uncompromising industry that requires players to be fully invested and have the drive and passion to thrive. We have been in discussions with Harley throughout the year and support his decision ... ".

Gold Coast's Matt Rosa has retired after hamstring and ankle injuries had taken their toll. At a press conference, he said, "... the last 12 months, my body's been telling me it can't get close to 100 per cent often enough for AFL footy. It's always tough when you make the call but I'm comfortable with it and excited about the future." Rosa has injured his hamstring four times since the start of preseason and finally succumbed for good with an ankle injury suffered in a recent NEAFL match.

Rosa was originally drafted by the West Coast Eagles in 2004 and played 168 games. He missed out on the 2005 Grand Final (won by Sydney) and was an emergency for the 2006 premiership triumph. He was in the 2015 side which lost to Hawthorn, then asked to be traded. Rosa, 31, played 39 games for the Suns in the past three seasons and said he has no regrets.

In an open letter at the club's website, he thanked all those who had influenced him and said, "I've loved my time at both clubs, they've been fantastic to both me and my family. “The game has given myself, my family and friends so much enjoyment ...  and I have been so fortunate to live my childhood dream ... There are many people I would like to thank for their support through the roller coaster ride of ups and downs that playing AFL football provides.” Rosa said despite three difficult years with the Suns, he was convinced the "tight young group" was headed in the right direction and had seen a vast improvement in their training and attention to detail over that time.

General manager of football operations Jon Haines thanked Rosa and praised his leadership since  crossing from Perth, "“Matt has been able to provide some great experience and leadership to our group ... continually endeavoring to drive good standards throughout the club. He’s been a great player throughout his career, a professional when it comes to looking after his body, which led to him being able to play over 200 games."

Adelaide midfielder Sam Gibson will see out the 2018 season before hanging up the boots. Gibson, 32, said the time was right. With a degree in engineering, he plans to go into the construction business. Through round 20, Gibson's game tally is 135 - for North Melbourne and the Crows. After several years playing at VFL level, Gibson was drafted by the Kangaroos in the 2011 rookie draft. He went on to play 130 consecutive games for the Kangaroos before being traded to Adelaide at the end of last season.

Gibson said, “I’m really grateful for the opportunity to play at the highest level with both the Kangaroos and the Crows. North Melbourne gave me a chance when no one else would and I had six wonderful years ... with some friendships and memories I’ll cherish forever. It was a privilege to come to Adelaide late last year and be a part of this football club. There’s a fantastic group of players and coaches here that will no doubt have success in the near future." Coach Don Pyke described Gibson as a true professional, "Sam has only been with us a short time but his dedication and professionalism in his preparation has been a great example to our younger players."

Veteran Docker defender Lee Spurr, 31, has succumbed to a chronic knee injury and retired. He has been battling a knee injury all season and never made it back into the senior side. He got close several times but the knee injury prevented it. In making the announcement, Spurr said, "My body sort of let me down ... I've had some issues and it was a hard decision. "I've loved my time at the club. It's really hard to say goodbye and I wish I could play on ... but my knee is telling me it's time ... I'll be forever grateful to Fremantle ... for taking a punt on me and giving me a rookie spot ... I felt lucky to play one game let alone to play over 100. I feel very privileged to be a part of that Fremantle era where we played in a Grand Final. We got very close, we were minor premiers in 2015 and I have some fantastic memories ... Even the lows, putting it all on the line and failing, I look back on that fondly. I don't have any regrets as we did everything we could and I'm proud and passionate to be a part of that."

Hailing from Queensland, Spurr attended five draft combines but was overlooked in the drafts. He moved to South Australia and played for Central Districts in the SANFL when finally spotted by recruiters. Spurr, a member of the leadership group 2012-17, was drafted as a "mature-age" rookie at the age of 24 in 2011 and debuted in 2012. He went to play 120 games, including the 2013 (losing) Grand Final. He said teammate Michael Barlow was the inspiration for him to keep persisting, "I almost gave it away when I was 20 years old and Mick Barlow got picked up and he sort of put mature-age players back as the flavor of the month ... It inspired me a little bit to keep going."

When asked,Spurr declined to comment on whether or not fellow veterans Aaron Sandilands and Hayden Ballentine should continue playing, but he believes the club is on the right track in their rebuild, "... this year was very similar to 2012 when we got going late in the year and were very close ... In 2012 we had a few more senior players and that's probably what pushed us over the edge and got us really going ... the foundations are really strong and I think this group can achieve anything in the next couple of years." Spurr won Fremantle's Beacon Award in 2012 and was voted Best Clubman in 2013. With his wife expecting their second child, Spurr said he was looking forward to spending more time with his family.