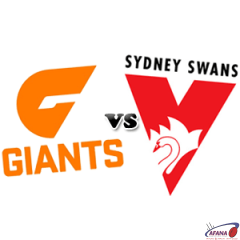 Expect a fiery encounter as the cross-town rivals will leave nothing in the tank in this do or die elimination final. With the game being played at the SCG, you would usually think it was advantage Swans, but 2018 has been no cakewalk for Sydney when playing at home - where they in fact have a 5-6 record at a ground that in the past has been somewhat of a fortress. The bye week has allowed both teams to consider some quality players who were on the injured list; for Sydney the potential addition of Lance Franklin and Luke Parker is huge, while the Giants could welcome back Toby Greene, Brett Deledio and even Zac Williams, yet to play an AFL game this season after suffering an Achilles injury in the preseason. With so many moving parts as to each team’s potential final 22, there is plenty of intrigue around how each team will line up.

In two encounters this season, the Swans have come out on top. In round three the Giants had a nightmare in front of goals, going down by 16 points while registering 12 goals 15 behinds. The Giants led most key categories including contested possessions and inside 50’s, but their poor finishing cost them dearly. In the round 22 rematch, the Giants were on top until fullback Phil Davis went down with an injury, allowing Sydney spearhead Lance Franklin to go on a goal kicking rampage. Franklin’s five goals were the difference as Sydney went on to win by 20 points. Overall the score in the last five encounters is Sydney 3, Greater Western Sydney 2.

Sydney
Jake Lloyd (28.3 possessions per game, 497.8 meters gained per game) is the architect down back for the Swans, while young gun Isaac Heeney is deployed by Coach John Longmire wherever he is needed most. Heeney will spend time in the midfield, up forward and when required play the spare down back where he reads the play as well as anyone in the league. Lance Franklin is the man that continually seems to drag his teammates over the line, no matter the situation. He gains meters, he causes double and triple teams from the opposition defense and he can kick a goal from just about anywhere. Franklin averages 3.2 goals per game, and is assisted by upstart Ben Ronke (1.35), Will Hayward (1.27) and Tom Papley (1.2).

The midfield leaders of Josh Kennedy and Luke Parker will have to be at the top of their game against the young Giants outfit, otherwise Franklin and company could be starved of opportunities up forward. Ruckman Callum Sinclair should have the edge over Giants stand-in ruckman Rory Lobb who struggles with the physicality of the position.

Greater Western Sydney
With a depleted forward line due to the absence of the injured Jonathon Patton and potentially Toby Greene, the strength of the Giants lies in its engine room. The young talent assembled in the midfield, playfully known as the “orange tsunami” such is the pace that this team can move the ball, is unrivaled in the AFL. Established youngsters Stephen Coniglio (27.9 possessions per game), Josh Kelly (27.6), Dylan Shiel (26.3) and the freshest young gun in Lachie Whitfield (26.45) are bolstered by veterans Callan Ward (27.1) and potentially Brett Deledio.

Phil Davis is an intercept monster (8.95 per game), trailing only James Sicily from Hawthorn (9.07) and Richmond’s Alex Rance (9.95) as the best in the league. Davis is crucial to the Giants back line, and if Zac Williams does in fact return to play his first game of the season, the Giants are in much better shape down back despite missing Heath Shaw through injury.

The Swans have a marked advantage when it comes to finals experience, boasting a whopping 303 games of experience, with the Giants having just 143. In their previous two contests, the Swans have targeted up and comer Lachie Whitfield with plenty of physical pressure, and on each occasion it has proved effective, with Whitfield managing just 32 possessions in total for both games, well down on his average of 26.5 per game. The players returning from injury will have a huge bearing on the outcome of this game, with Franklin and Parker from Sydney and Greene, Williams and possibly Deledio for the Giants. While the small SCG surface may not have been as friendly to Sydney this season as it has in past years, it should prove an ally as the Giants speed advantage will be somewhat nullified by having less open space to run to. Having said that, the midfield of the Giants is hard to stop when firing, and that is where the match could tip in Greater Western Sydney’s favor, particularly if Sydney’s Luke Parker isn’t fully fit.

The Phil Davis versus Lance Franklin match-up is absolutely huge in this contest. Davis has shown he matches up well against Franklin having nullified him in the past. If Franklin has to move further up the ground to get his possessions, the Giants will be a big chance to cause an upset.