The Good, the Bad, and the Ugly of the Pies 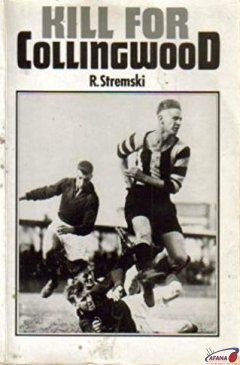 The following is a book review by long time fan and AFANA supporter Mark Dillman.

In 2018, a Collingwood Magpie super-fan from Melbourne very generously sent me a copy of the book "Kill For Collingwood", which he described as the good, bad, and ugly history of the football club from its earliest origin through the time of the book's publication in 1985. I was very surprised at this kind gesture. My offer to pay, at least for the airmail postage, was politely declined. So, I made a donation to his favorite local charity* and informed him.

Author Richard Stremski is an American who moved to Australia to teach at La Trobe University. His tenure at La Trobe included his research and writing of this book. My friend says that the author is qualified as an unbiased perspective on the subject matter having not grown up in the culture of Australian rules football. Still, Stremski digs deep into every source available to come up with this account of the origins and growth of the club. Printed materials on the subject appear to be exhaustive and dozens of people from as many decades as possible are quoted at length.

Stremski stresses the point that Collingwood was a poor suburb of Melbourne from its beginnings. Australian suburbs like Collingwood were more like neighborhoods in the American sense, where a street marks the boundary between them and not at all far from the central business district. Even in the 1880s, there were civic disputes like where manufacturing and processing plants could dump waste. Personal transportation was very limited in those days so it was common for people to pretty-much stay in their own part of town. A trip to the other side of Melbourne was considered a major excursion. It was in this environment that the new, fast growing sport of Australian rules football had lots of local fans and many young men willing to play it either for fun or for local fame.

The circumstances of how the Collingwood Magpies came to exist may not be a whole lot different than that of other clubs, and the author really doesn't make comparisons. I confess to not knowing the origins of competing clubs so I'm no expert. Still, the Magpies, the players, the fans, the investors, and the organization's higher-ups seemed to never shake the feeling of sensitivity to their impoverished roots. Competing clubs never stopped reminding them. It was energy borne of this feeling to prove themselves that has been a source of inspiration to the club. The author uses phrases like "most loved and the most hated team in Australia"1 and "fanatical devotion or detestation"2. This quote encapsulates the story of the Magpies' early decades:

"Collingwood has been on the receiving end of this kind of animosity [from the Carlton Blues] for eighty years. The extraordinary success of the Club generated this reaction. By 1922 Collingwood had only missed the VFL finals twice, had competed in 12 of the 25 grand finals and had won five flags. No team had competed in the finals or the grand final as often as Collingwood. Only Fitzroy [the Lions] had won more premierships, and Fitzroy was beginning its long descent while Collingwood's golden years were just on the horizon. The reason why other teams sought victory over Collingwood is obvious: the Magpies were the team to beat; they were the yardstick by which others could measure their own success."3

Structural growth of the club is also described year by year, including who stepped forward to manage and finance the club, the animosities and subterfuge between club leaders, the construction of ovals, the various permutations of seating and accommodations for spectators, the coaches, the players, and by the post World War II era, the sudden appearance of massive amounts of money pouring into sport as a whole including the Magpies. As big business assumed club leadership, the Magpies' humble beginnings seemed to appear ever more distant but never forgotten.

As the book concludes, the Collingwood Magpies were experiencing an extended drought of Premierships. The 1990 Grand Final was five years in the future and couldn't come fast enough. The nickname "Colliwobbles" had become very old.

My thanks to Joffa Corfe for his gift of this informative book. Rare book websites4,5 offer copies at prices too rich for my blood. I hope this was a spare copy of his.