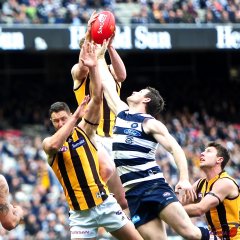 The Bulldogs fell to the curse of the incoming coach as Saint Kilda, with interim coach Brett Ratten at the helm, defeated them and consequently dented the Bulldogs finals aspirations at Marvel Stadium on Sunday.

In other results, Fremantle held on by just one point against Sydney to keep their slim finals hopes alive and Carlton continued their resurgence with a win over the hapless Gold Coast Suns.

After round 18 and with just five to play, there have been plenty of changes to the AFANA Power Poll.

1.    Brisbane Lions (Last Week: 2)
What a season the Lions are having in 2019. With a last gasp win over the Kangaroos on Saturday night, the Lions have now won five games in a row and set themselves up for a top two finish heading into finals.

2.    West Coast Eagles (4)
The Eagles didn’t reach top gear but did enough to defeat the Demons at Traeger Park in Alice Springs, Elliot Yeo’s long goal sealing the deal for the “visitors” late in the final quarter.

3.    Geelong Cats (1)
Geelong banked plenty of wins early but has been off the boil of late, losing to Hawthorn at the MCG on Sunday – their third loss in the last five weeks. There is no panic stations down at Kardinia Park just yet, but the Chris Scott’s men will need to rebound if they want to hold on to first place on the AFL ladder and premiership favoritism.

4.    Essendon Bombers (5)
Essendon arguably pulled of their greatest victory of the season against the Crows at Adelaide Oval on Friday night. Trailing by 30 points in the second quarter, the undermanned Bombers used speedy ball movement to turn the tables on the Crows and run out 21 point winners.  That makes it six wins from Essendon’s last seven starts.

5.    Collingwood Magpies (3)
Collingwood took on an injury ravaged Greater Western Sydney at Showground Stadium on Saturday, with most expecting the Magpies to win after a stirring victory against the Eagles in Perth the previous week. Unfortunately for Collingwood fans, this was not to be as the Giants used an eight goal first quarter blitz to eclipse the Magpies by 47 points.

6.   Richmond Tigers (6)
Richmond comfortably defeated Port Adelaide to notch win number four in a row, and is gathering some serious momentum heading towards the finals. Forward Tom Lynch was in ominous form for the Tigers, looking as powerful as he did prior to being sidelined by a PCL injury. Don’t count them out.

7.    Greater Western Sydney Giants (7)
The Giants notched a super impressive win against Collingwood given the makeshift line-up that took the field in the absence of Josh Kelly, Stephen Coniglio, Callan Ward (long term injury) and Phil Davis. The undermanned Giants managed 122 points against the Magpies defense – a fact that should have opposition coaches concerned.

8.    Hawthorn Hawks (12)
Alastair Clarkson has done it again, masterminding a win over first-placed Geelong at the MCG by 24 points after leading at every change. With a three game win streak, the Hawks remain an outside chance to steal eighth place if the Crows continue to falter.

9.    North Melbourne Kangaroos (8)
The Kangaroos stayed with Brisbane for the entire contest in part due to being super accurate in front of goal (12-3), but ultimately the 12 point loss probably spells the end of North Melbourne’s finals aspirations.

10.    Adelaide Crows (9)
The Crows tenuous grip on eighth place is hanging by a thread after another home defeat, this time at the hands of an injury-hit Essendon. This week’s matchup with Carlton – one that would have seemed like certain victory weeks ago – suddenly has huge ramifications as the Blues have found some form while Don Pyke’s men have endured multiple second-half fade outs.

11.    Western Bulldogs (10)
The Bulldogs fell victim to the “new coach” curse, going down to Saint Kilda under interim coach Brett Ratten. The timing couldn’t have been worse for Luke Beveridge’s men, with the loss meaning the Bulldogs drop a game back from the pack chasing a spot in the final eight. Finals now look unlikely.

12.    Port Adelaide Power (11)
Port finally broke the cycle of winning one week and losing the next, unfortunately for them it was by losing two games in a row for the first time since round eight. The Power simply could not match Richmond’s transition from defense, and found itself struggling to contain Richmond forwards Tom Lynch and Jack Riewoldt.

13.    Fremantle Dockers (13)
It was an ugly, hard slog, but Fremantle’s one point victory over the Swans does keep the Dockers slim chance of playing finals alive.

14.    Carlton Blues (15)
The Blues won their third game in four starts with a four goal victory over the struggling Gold Coast Suns. As Carlton look towards climbing the ladder in 2020, there are plenty of good signs in the recent form of the young Carlton squad.

15.    St Kilda Saints (17)
Interim coach Brett Ratten led the Saints to a big win over the Bulldogs in his first game pulling the strings, instigating a more attacking style as the Saints used the center of the ground to great effect. Whether the style will hold up is yet to be seen, but the first up performance was super-impressive.

16.    Sydney Swans (14)
The Swans defensive game plan turned the match against Fremantle in Perth into a game of attrition, but Sydney couldn’t land the killer blow in the last couple of minutes as the Dockers held on by a single point, 52-51.

17.    Melbourne Demons (16)
Melbourne produced an improved performance against league pacesetters the West Coast Eagles in Alice Springs, but ultimately could not match the intensity of the Eagles in the final quarter as they went down by 13 points. Expect better things in 2020.

18.    Gold Coast Suns (18)
The bad news is that the Suns lost their 13th game in a row on the weekend. The good news is that they were at least competitive against a hungry Carlton outfit, losing by just 24 points.