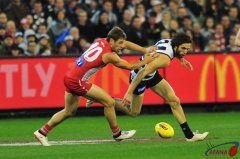 Over at Sydney, defender Nick Smith, 31, has been forced to retire due to a severe hamstring injury which has sidelined him for the entire 2019 season. He suffered the injury (tearing the hamstring tendon from the bone late last year) and has undergone multiple surgeries. He said he was close to getting back several times, but suffered some setbacks. He admitted that at his age, it was always going to be an uphill battle. He and Coach Longmire had several discussions and Smith decided against an attempted return in 2020. Smith said, "... this club has special place in my heart ... it's been incredible."

Originally taken as a rookie in 2007 and debuted in 2008. He played 182 consecutive matches from 2011 through Round 21 last year (when he was injured). Smith joined the leadership group in 2012. He was a member of the 2012 premiership side and was assigned the difficult task of minding the dangerous Cyril Rioli. He did with aplomb, restricting Rioli to just four kicks and no goals. After that game he said, "Playing on Cyril was a scary proposition. Usually I went into games with a plan and felt confident ... but some of the stuff Cyril did, I'd watch vision and say, "I'm not sure I can stop that "... I still look back at that (the 2012 Grand Final) ... and we had had a really good group ... That is my fondest memory in footy. "You grow up as a kid watching the Grand Final ... and wanting to be a part of that, so that was a boyhood dream. You share a bond with those guys for life and I'm looking forward to the reunions because it was really special for that group."

Other tough assignments for the small defender over the years have been the likes of Eddie Betts, Stephen Milne, Steve Johnson, and Mark LeCras. He said he always enjoyed the match-ups and has plenty of respect for those players.

Coach John Longmire paid tribute to the reliable Smith for his consistency over the years, "It can't be underestimated how much mental strength Nick has had over the years to play that position every week. I can't think of too many times when Nick has been beaten ... which is quite incredible when you think about the talent that he's played on. Nick is also one of the best blokes you could ever get to have gone through this footy club. He gives everything as a person and his impact on this club has been significant. Nick is highly respected by coaches and peers alike. First elected into the club’s leadership group in 2012, he is the epitome of what the Bloods are about. And for us, that’s as great a compliment as there is.” As for Smith's role as a small defender on some of the most talented small forwards going around, Longmire joked that it was a wonder Smith ever got any sleep on a Friday night.

During his time on the sidelines, he has helped mentor some of the younger players. The Swans and Smith are exploring opportunities for him to remain involved in the game in some capacity.