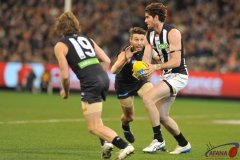 Coach David Teague said it was a hard decision, " ... Where Carlton's at ... You've gotta project forward, and where the Carlton list was at, and the positions available, it just means he's been squeezed out. He's been outstanding, I've loved coaching him, the way he goes about it.”

Small Docker forward Ballantyne has been out of the side for most of the season due to persistent hamstring injuries. He played his third game in front of the Freo faithful when the Dockers hosted Essendon at Optus Stadium. His management advised the club that Ballantyne, 32, will seek playing opportunities elsewhere next year whether it be AFL or in the WAFL. He is also considering an off-field role somewhere. Ballantyne was drafted in 2005 after winning the Sandover Medal (WAFL Brownlow equivalent) while playing for Peel Thunder.

Ballantyne reflected on his career, teammates and supporters, "I’ve loved my time at the club ... Just a huge thank you…obviously I couldn’t have done this without all the support ... To the players, thanks a lot to everyone for all the help and support along the way ...".

General Manager Peter Bell said, “Hayden has always been hugely popular with our players, respected for his leadership and admired for his incredible determination and tenacity. He is also much loved by our members and supporters ... ".