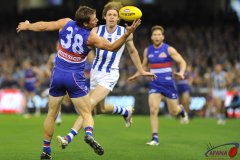 knows that if I could play footy forever, I would. I just love the game so much ... But unfortunately that's not possible ... although it was a tough decision ... the time has come for me to finish ... Since injuring my knee I've had some time to reflect ... I'm at peace with the decision ... Going through this process has allowed me to reflect on my career, and how grateful I am to have had the incredible support of so many people ... - the coaches, support staff, medical and rehab staff, my wonderful teammates, and of course, our amazing fans. It has truly been an honor to represent the Western Bulldogs ... I'll take so many treasured memories with me.”

Due to his latest injury, Morris will be unable to participate in the team's finals campaign. He spent four years playing in the VFL before the Bulldogs gave him a chance on their rookie list in 2004. He debuted in 2005 and barely missed a game over the next nine years. Injuries finally began to take their toll with a broken back, leg and arm, and two ACL injuries threatening to prematurely end his career, but every time he willed himself to return. A third ACL injury in Round 19 this season was the end.

Coach Luke Beveridge said of Morris, "Dale is one of the most resilient and positive characters I've met ... an exceptional footballer for such a long period of time ... Everything Dale does has a selfless edge. He always wants to make people around him better, and that's a tremendous quality in such a competitive and demanding sport. He is loved and admired by everyone at the Western Bulldogs for his incredible deeds on the football field and for the way he carries himself in everyday life. Dale has made the Western Bulldogs a better place ... and his legacy will live on forever.”

Just after Round 23, versatile Collingwood utility Tyson Goldsack told the club and teammates that he would be retiring when Collingwood's season is over. He actually had decided in 2018 that 2019 would be his final year and he and his family will relocate to Adelaide. He was drafted by the Magpies in 2006 and has played 165 games (through Round 23).

His versatility, long kicking, team-first mentality and irreverent sense of humor off the field made him a hugely popular figure around the club. He managed just four games in 2018 due to a knee reconstruction, all four were finals. Said Goldsack, “I gave it one more year but football’s grim reaper got me. But I’m content ... realized all of my football dreams, met some outstanding and interesting people and, in a sense, grew up with Collingwood’s arm around me. I hope I did the jumper proud and thank the many, many people who helped me along the way.”

Coach Nathan Buckley had earned complete trust from everyone, “From his earliest days ‘Goldy’ was always one of the most intense players in the contest. His speed and courage ... quickly earned the respect of his teammates. He was also a great 'clubman', someone people liked to spend time with. In the confines of a football club, who you are is as important as what you can do and ‘Goldy’ is a first class human.”