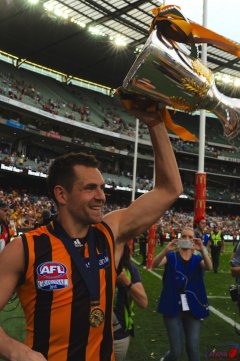 Fagan also paid tribute to Hodge's influence in the young team, which shot from 15th up to 2nd in one season before their losing both finals matches. "More than anything, he's a good friend. He's a bit of a rascal, but mostly he's good ... the best leader I've seen, one of the toughest players I've seen, he's a warrior ... a really intelligent player, he sees the game as well as anyone ... probably Sam Mitchell is his only equal. He's a giver of his time and knowledge ... there's no doubt the development of our team has been accelerated by his presence ... he's one of the all-time greats. More than anything, he's a good friend.” Fagan said Hodge had done a lot of work to prepare the young leaders in the team, working with the leadership group and younger players.

General Manager David Noble echoed Fagan's sentiments, praising Hodge's commitment and passion during the past two seasons: "Luke has been a magnificent leader ... on and off the field. He is a man of action and has led by example."

Hodge, 35, was the last of the top three selections in, what has become known as, the 2001 "superdraft", the other two being Chris Judd and Luke Ball. He played 305 games with Hawthorn before announcing his retirement at the end of 2017. However, he was lured out of retirement by Fagan, who had been an assistant coach with Hawthorn during their premiership years so the pair go back a fair way. Hodge played 41 games for the Lions.