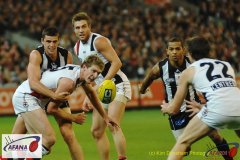 Below are the 22 final selections for the 2020 All-Australian team. Some of the selections left many scratching their heads. Of course, like every year, fans of teams wonder why their players were overlooked. Several selections which took many by surprise was midfielder Dustin Martin placed in a forward pocket and midfielder Patrick Dangerfield slotted on a half-forward flank. For better or worse, and surely to be a topic of conversation is the final team: