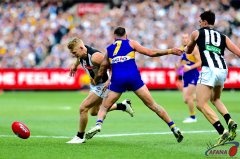 The Collingwood Magpies defeated the West Coast Eagles in an epic battle by one point, to knock the Eagles out of the final series. The Eagles had been unbeatable in their seven home ground games this year but were knocked off their perch when it mattered most. The Pies were thrashed by the Eagles at Optus Stadium earlier in the year and few pundits expected them to come out of a COVID-19 lockdown and trouble the home team. With their respective seasons on the line, both teams began the match nervously with players dropping marks (catches) and fumbling the ball in the opening minutes. The Pies attacked early by bombing the ball long to their forwards which suited the Eagle defenders Jeremy McGovern and Tom Barrass who punched the ball away or took intercept marks.

After seven minutes of play, a turnover in the center of the ground saw Eagle youngster Brayden Ainsworth gather and  kick to Jack Darling, who marked and goaled from fifty meters to open the Eagles' account. But the Magpies continued to attack.  McGovern was penalised for taking the ball out of bounds deliberately and Scott Pendlebury's free kick found Mason Cox, who marked and goaled. Three minutes later Cox out-bodied McGovern and marked to boot his second goal. The big American was on fire when he out-marked Tom Barrass to boot his third goal at the fifteen-minute mark of the first quarter. The Eagles looked rattled. Even moreso when Oscar Allen slapped Taylor Adams after Adams marked. The resultant fifty meter penalty gifted Adams a goal and the Eagles looked in trouble at the end of the first quarter.

The Eagles fired early in the second quarter. Tim Kelly cleared from the center and Josh Kennedy marked his long kick. Kennedy's set shot was good and the Eagles looked more settled. However a high tackle by Shannon Hurn on Collingwood's mature-age recruit Josh Noble, gave Noble a set shot on goal and he made no mistake. A minute later the Eagles got the ball back into Kennedy's hands as he held another mark to score his second goal. The youngster Ainsworth then snapped a close range goal for the Eagles to bring the home crowd to life. Both teams launched attacking forays with defences holding firm until Jamie Elliott laid a strong tackle on the Eagles' captain Luke Shuey. Elliott's resultant free kick was accurate and kept the Eagles at bay until Jack Darling marked and goaled a minute before the half-time break.

A goal to Oscar Allen within the first minute of resumption of play put the Eagles back in front. But three minutes later it was all class from Jordan De Goey, as he took a handball from Mason Cox and dodged around two Eagles to kick truly from 40 metres and regain the lead for the Pies. The Eagles replied quickly when Liam Ryan showed sublime skill to pass to Jamie Cripps, who marked and kicked truly. The Eagles were in front again. Half way through the third quarter, the Magpies lifted their pressure game and won more contested possessions. Brodie Grundy continued to battle with Nic Naitanui in the ruck, but Adam Treloar and Taylor Adams lifted and with Scott Pendlebury as they repeatedly pushed the Pies into attack. Goals to Will Hoskin-Elliott and Brody Mihocek placed further pressure on the home team, which trailed by 10 points at the last break.

Liam Ryan marked a Naitanui kick, to goal in the opening minute of the final quarter. Then two minutes later Eagles small forward, Jamie Cripps, handpassed to Oscar Allan who snapped accurately for goal. The roar from the COVID-restricted 32,865 crowd shook the stadium as Allen pounded the turf with delight and the Eagles were back in front. The Eagles had two chances to seal the game but Josh Kennedy missed two shots he would normally have taken. The Pies then bounced back with a brilliant running goal to Mihocek at the ten-minute mark, to have the Pies in front by a point. Four minutes later a brilliant snap by Jordan De Goey extended the visitors' lead to seven points. Two minutes after that, Mihocek took a clever mark against McGovern and kick truly to almost seal the game. But the Eagles would not give up. A defensive error by Brayden Maynard allowed Andrew Gaff to smother his kick and Liam Ryan gather the loose ball to kick to Kennedy, who marked. This time Kennedy did not miss. The Eagles pushed forward again and four minutes later Jack Darling received a free kick for a high hit from Jack Crisp. Darling's close-range shot was good and the Eagles were just a point down with a minute and seventeen seconds on the clock. The Pies won the next center bounce and attacked only to see McGovern gather the ball on the last line of defense. The Eagles attacked through the center of the ground but a match-saving smother by Taylor Adams on Tom Cole, stopped the Eagles final foray. Pendlebury booted the Pies forward and they soaked up the clock to win a memorable match.

The Magpies' win earns them the right to meet the Geelong Cats in a preliminary final in Brisbane. The Eagles' season, which promised so much, is over.