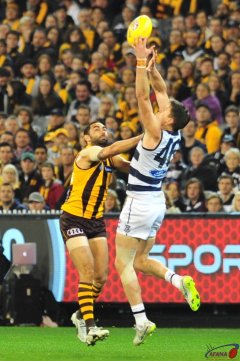 AFL CEO Gillon McLachlan praised Burgoyne for his highly decorated career, “There aren’t many footballers with as many career highlights as Shaun Burgoyne. Shaun’s impact on the field has been extraordinary. A four-time Premiership player, a member of the illustrious 400 game club and our Indigenous games record holder, Shaun’s contribution to our game has been monumental ...".

AFL Executive General Manager of Inclusion and Social Policy, Tanya Hosch highlighted Burgoyne’s impact on Australian Rules Football across all levels of the game, “For Shaun and our competition, his achievements highlight the significant contribution of all former and current Aboriginal and Torres Strait Islander players and contributors to the game. We hope that Shaun’s career can inspire everyone in our game and that younger players of the game - at any level - take inspiration from Shaun’s playing record, leadership, and his humility off the field. Our code has seen incredible contributions from many talented Aboriginal and Torres Strait Islander players, and Shaun has remained an integral member of that group throughout his AFL career ...".

Tiger defenders Bachar Houli and David Astbury have retired. Houli was originally drafted by Essendon where he played 26 games across four seasons. He joined Richmond at the end of 2010 via the preseason draft and played 206 games for the Tigers. Houli, 33, will be remembered as an ultra-consistent performer that thrived in the biggest of games. None were bigger than the three Grand Finals. In 2017 and 2018, he finished second behind Dustin Martin for the Norm Smith Medal. In 2020, he played out the game despite suffering a calf injury early the match.

Off the field, Houli’s legacy at Richmond and the wider community as a cultural ambassador will live on for many years to come, with the Bachar Houli Foundation, which Houli founded, building young leaders within the Muslim community. The Foundation aims to support social cohesion by fostering young Muslims with a sense of belonging through sport. The first Bachar Houli Program, launched in 2013, was the first Muslim Football Academy in Australia. It has since reached over 35,000 participants nationally and will continue to expand. Some years ago, he pushed for prayer rooms to be set up at all major AFL venues so Muslim fans could attend games and fulfill their prayer commitments.

Houli said his 15-year journey in the AFL had gone by quickly, “I have been fortunate enough to play at two great clubs, and to be a part of the history of this game. Not only did I want to play as many games as possible, but I wanted to educate Australia, about my faith (and) about the religion of Islam, the religion of peace. I hope I have left a sense of peace in everyone’s heart. I sincerely thank the club and the AFL for allowing me to be me. Thank you to the (entire) Richmond Football Club, from Peggy to the Chief (Brendon Gale), to the amazing Tiger Army. for allowing me to be a part of this amazing organisation. It’s time to go fishing, Tiger for life.”

Along with his three premierships, Houli was All-Australian in 2019. His consistency saw him finish in the top ten of the best and fairest count in seven of the past 10 seasons.

Astbury, 30, was drafted in 2009 and debuted as a forward. He had a bad run of injuries early in his career, playing just 24 games in five seasons from 2011 on. He finally had an uninterrupted run in the club's drought-breaking premiership year 2017. He played all 25 games that year, often taking on the opposition's best forwards. He followed that up by playing all 22 games in 2018 and 2019. He etched himself into Grand Final history in 2019, holding his direct opponents to just one possession for the entire game. A knee injury restricted him to just nine games in 2020 but he returned to play a key role in the finals and premiership win.

Off the field, Astbury has had a strong impact influencing the club's culture. He was particularly vocal and prominent in the playing group’s stance around the Black Lives Matter movement. He has also held leadership roles throughout his time at the club.

Astbury’s only coach in the AFL, Damien Hardwick, said that Astbury would leave as an all-time great of the football club, “Dave is the epitome of the Richmond Man that we speak about all the time. The legacy that this man will leave is up there with the very best players at our footy club. The legacy he leaves is one of selflessness and resilience. The man missed two years and has had 14 operations. Most people would have just given up. But not Dave Astbury. He has fought for 12 years for this footy club. He is one of the best Richmond Men I have ever seen.”

Astbury said his 155 game career was an “absolute joy ride” of a football career, “It really is a dream to be completely content with what my career consists of and be really proud of that. “I am really humbled by the football club wanting to keep me around, but I know this decision is right for me and for the club going forward. I am so proud that I have fulfilled my career and my dream at one club, this club.”