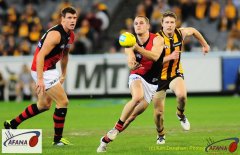 Essendon has delisted David Zaharakis, but he will be looking for another club to continue his career. Zaharakis, 31, grew up as a Bomber supporter and has played 226 games since his 2006 debut. He won the club's best and fairest award in 2011 and the Anzac Day Medal in 2011. Zaharakis’ most iconic moment was his match-winning goal against Collingwood on Anzac Day in 2009 in just his fourth AFL match. He said, “I lived out my boyhood dream to play for the Essendon Football Club, and for that I will always be incredibly grateful. It’s been a honor to be part of this club. I leave the club knowing I gave it my all, and hopefully I brought some joy to our members and supporters along the way - they’ve stuck fat with the club and we’re a better place for it. I just want to thank everyone who has been part of my journey at Essendon. It’s been a surreal ride but one I will forever look back on so fondly ... I’m looking forward to seeing what the future holds. I’m hopeful to continue my AFL career elsewhere as I still feel I have a lot to offer. I truly wish this playing group and coaches all the very best for the coming years. There’s no doubt the future looks bright for the Bombers.” Although he was at the club during the Supplements saga, he was not caught up in it or suspended as he refused to participate in the program due to an intense aversion to needles and shots.

Collingwood defender Anton Tohill has announced his retirement. He will be returning home to Ireland to pursue a medical degree. Tohill joined the Pies in 2018 as the fourth Irish player to join the club. Tohill, 21, debuted this season in Round 19, but that was his only game. He was on a rookie contract with the club, but could no longer defer his university studies and decided to head home. Fellow Irishman Mark Keane also recently returned to Ireland but will return to Australia for the preseason.