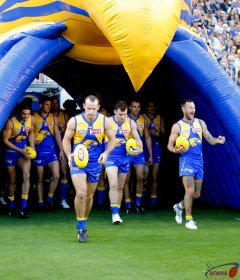 However, it was the older Eagles' players of Andrew Gaff, Jack Redden, Shannon Hurn who kept the Eagles in the contest in the second and third quarters. Nic Naitanui worked himself into the ruck after initially being shaded by Jarrod Witts who also showed a promising return from injury for Gold Coast.

The Suns played a more traditional style of football by forcing the ball forward in a straight line, in an attempt to keep the Eagles under constant pressure. The Eagles played their tried and proven style of spreading across the field, when they gained possession, to use their kick and mark (catch) strategy to open up lines of attack. The Eagles also got numbers to the ball to pressure the Suns’ midfielders into making errors. The Suns looked better when they booted the ball into open spaces and used their pace to rush the ball into attack. Jack Petruccelle used his searing pace to make some useful attacking moves for the Eagles and Noah Anderson played well in the midfield for the Suns. Former Carlton player Levi Casboult’s height offered a target for the Suns in attack, but he was let down by his kicking to finish with just two goals.

Towards the end of the second quarter the Suns adopted the Eagles' tactic of spreading across the field and the Eagles were unable to apply as much pressure on the Suns' ball carriers. It was at that point that the Suns showed belief in their ability to outplay the older Eagles and pull in front during the third quarter. The Eagles showed their resolve, led by Jeremy McGovern, Tom Barrass and Shannon Hurn in defense, to give the Eagles a six point lead at the final change. However, it was the same group of experienced players who made uncharacteristic errors in the final quarter, when challenged by the run and enthusiasm of the younger Suns. Josh Kennedy booted his second goal to give the Eagles hope at the 17 minute mark of the final term. However, four goals to the Suns in the last nine minutes from Ben Ainsworth, a lively Alex Davies and two from Isaac Rankine gave the Suns a reward for their effort and a memorable victory.

The Suns will trouble some of the lower ranked teams this year, but with the absence of Ben King in attack they will struggle to kick winning scores consistently. West Coast have had a horror off-season due to a combination of injuries and players sidelined due to COVID protocols. They will improve and the proud club will win games, but the question is whether they can keep their ageing stars on the field long enough to win enough times to make the finals.