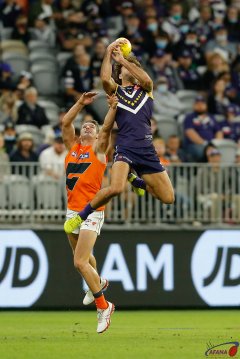 Preuss had the better of Dockers’ ruckman Sean Darcy but the clearances from center bounceowns and stoppages were split evenly, with the Giants having perhaps a slight advantage in the first half. Youngster Tom Green and Tim Taranto worked well together to push the ball out of the center for the Giants. Lachie Whitfield also combined well in the midfield to initiate Giant attacks. With Hogan and Himmelberg both booting two goals each before the main break, it seemed that it was just a matter of time before one of them cut loose and punish the Dockers for early inaccuracy.

Tom Green started the third quarter on fire with two excellent goals, to give the Giants the lead for the fourth time in the match. Unfortunately, Green’s clumsy celebrations after his second goal, resulted in a free kick, which led to a goal to Travis Colyer. (The free kick was taken in the center of the ground, in place of the usual after-goal bouncedown, as the infringement occurred while the ball was being returned to the center of the ground.)

The Dockers locked play into their attacking zone through strong tackling pressure, particularly by their small forwards Sam Switkowski and Lachie Schultz. However, poor shooting only gave the home side three consecutive behinds. The Giants then broke the shackles with a quick transition into attack and Matt de Boer‘s goal brought the Giants to within two points at the final change.

The final stanza began with a gripping eleven-minute struggle and the Giants crept one point closer. The Dockers finally straightened their goal kicking to boot six straight, while the Giants could only manage three behinds. The finish pleased the home team supporters but was almost an anti-climax to a game that had been an engrossing and dour struggle for three and a half quarters.

Next week the Giants meet the reigning premiers, the Melbourne Demons at the MCG. The Giants are a better team than their ladder position suggests, but a win against the undefeated Demons seems unlikely. Fremantle meet the Essendon Bombers at Marvel Stadium, in a game where the proud Bombers will start favorites.