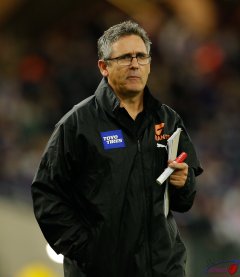 Speaking at a media conference on the Thursday morning, Cameron said it was a positive decision for the club, "I know I've still got the players, but it's a sapping job ... that can wear you down a little bit ... that's not just the one reason ... there is a whole bunch of reasons ... The timing is right ... I’ve always had the best interests of the club at heart ... No one person is bigger than the club itself and I know this is the right decision for the club’s future. I’ve given everything to the role and am proud of the part I’ve played ... This is a special club with a lot of great people, who have supported me every step of the way. I’m incredibly thankful for the opportunity I’ve had to contribute significantly to building a new football club and to growing the Giants across Western Sydney and the ACT. It’s been a unique opportunity that I reflect on with enormous pride. It’s been a wonderful journey and I thank the players, staff, members, and fans that have been on that journey with me ... ". He also said, after 34m years as a player and coach, he would take a break for a few weeks to spend time with his family but did not rule out a coaching role in the future.

GWS CEO David Matthews and chairman Tony Shepherd both paid tribute to Cameron, saying he had not just built a team, but a football club. Shepherd said, "He took a whole bunch of teenagers and turned them into elite footballers - a remarkable achievement ... we will always be grateful to Leon Cameron. “He will always be remembered in the history of the Giants. He is a values-based coach and it is his values that made him so successful ... He embraced the concept of setting up an AFL club in western Sydney ... and making it a success. Leon has always put the club and the game first, and has worked tirelessly to grow Australian Rules football in NSW and the ACT ... he has ultimately been an outstanding coach ... his record speaks for itself and the relationships he has built will endure. He should be congratulated for his work to take a brand-new club in NRL heartland to its first Grand Final - and regular finals success - within just a few years ...".

Matthews said, "... To be a senior AFL coach is one thing, but to play an instrumental role in building a club is another thing entirely and Leon has certainly achieved the latter. He is a selfless and people-driven person with outstanding values ... Leon is a person of the highest quality and integrity and we’ve valued the ability to have honest conversations about the best way forward for the club. It was quickly apparent during a discussion earlier this week that we were in clear agreement that now is the time to take a different direction relative to the senior coach position. We’re looking forward to celebrating Leon’s contribution ... in a range of ways ... "

There has already been speculation about the next senior coach. Mark McVeigh is one possible candidate as are James Hird and former Hawk coach Alastair Clarkson. Hird joined the club in January in a part time role as a leadership advisor, joining former teammate McVeigh at the club. Clarkson, who has recently been traveling in the USA visiting sports clubs, has not ruled out a return to coaching with one criteria being that it is with a club capable of winning a premiership.