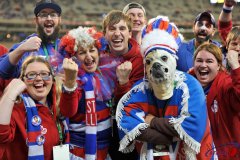 The Western Bulldogs produced an irresistible second half of football to record their highest score and biggest winning margin against the West Coast Eagles. The win allowed the Dogs to sneak back into the top eight after a slow start to the season. Their 6 wins and 5 losses put them within striking distance of the teams above them and sets them up for the second half of the season. West Coast have one win from eleven games, which equals their worst start to a season. The loss to the Bulldogs was also their seventh consecutive loss, all of which had a deficit of 50 points or more. The Bulldogs ruckman Tim English played a magnificent game, dominating the ruck and picking up 25 possessions in general play. It is rumored he will decline offers to return to Western Australia, and in the near future, will sign a new contract to stay with the Dogs.

The Eagles started the game with intent and matched the Bulldogs with contested possessions in the early part of the match. Jack Darling had a welcome return to form for the Eagles by marking (catching the ball) and booting the game's first goal from a difficult angle, after six minutes of play. The Bulldogs then picked up their pace and showed some of their old flair with quick handball and quick transitions from defense. A clever knock of the ball by Anthony Scott, back to Aaron Naughton, saw Naughton boot the Dogs' first goal at the twelve-minute mark. At the next bounce-down Tom Liberatore tapped to Dunkley who shot the ball to wingman Lachlan McNeil, who added the Dogs' second goal from 50 meters. The Dogs' midfielders Josh Dunkley, Adam Treloar, and Buku Kharmis, along with Liberatore and McNeil, dined on silver service ruck work from English. However, at times the Eagles were able to grab some crumbs. Tim Kelly gathered an English tap, to handball to Luke Shuey, who kicked long to Darling who marked and booted his second goal. But it was the Dogs overall dominance of center bouncedowns and their relentless pressure on the ball that resulted in a three goal lead at the first break.

The Eagles continued to contest for the ball in the second quarter, but were often outnumbered by the Dogs who were more willing to run and commit to supporting their team mates. The Eagles' lack of run gave the Dogs freedom to switch play across the ground and use open space to set up attacks. West Coast on the other hand, pushed to the boundaries whenever they could, so if there were turnovers, their defenders had some chance of intercepting the Bulldog attacks. The Dogs took full advantage of this tactic by forcing the ball out of bounds, knowing that with English dominating the throw-ins their midfielders would win clearances. The Dogs also used aggressive field settings at stoppages. They positioned players (goal-side) of stoppages, knowing that when their midfielders got the clearance, they had free players forward to take advantage and attack. This allowed them to run free and break through the Eagles' defensive web with a series of handpasses and quick ball movements. Tim Kelly played an outstanding game for the Eagles and was the only player able to negate the Dogs' tactic by intercepting tap outs and winning clearances for the Eagles. At the main break, the Eagles were not out of the game, mainly through the efforts of Kelly in the midfield and Darling in the forward line.

In the third quarter the Dogs ratcheted-up the pressure around the ball to the extent that the Eagles almost became spectators as the Dogs ran wild. With the Bulldog midfielders running free, the Eagle defenders were frequently caught out of position. The Eagles' defense became disorganized and their intercept marker, Jeremy McGovern, was out of the game with a back injury. Tom Barrass fought on bravely at fullback but his Bulldog opponent Aaron Naughton was flooded with opportunities and finished with four goals. The Dogs added eight goals for the quarter with the only Eagle resistance coming from Darling and Kelly who booted a goal each. Whenever an Eagle player gained possession of the ball he was either under pressure from a tackle or had limited options up field, as by this time, they had run out legs and were unable to make meaningful leads for position.

The carnage continued in the final quarter. The Bulldogs equaled a long-standing AFL record of having sixteen players kick goals. Even Bulldog defender Alex Keath, who until this game had only booted three majors in his illustrious career, kicked two by following the ball into attack. The effort from the Eagles evaporated as they lost the contested possession count 112 to 139 and the uncontested possession count 215 to 217. The Bulldogs entered their attacking zone 68 times compared to the Eagles making just 37 entries. Perhaps the most telling statistic to indicate the unwillingness of the Eagles to apply pressure on the ball, is that the Bulldogs had 13 bounces to just one from the Eagles. Until this match the Eagles had an average losing margin of 76 points, it is now worse. The win for the Bulldogs gave them a valuable percentage boost, which will come in handy as the fight for the top eight intensifies.

Next week the Eagles travel to Adelaide to play the Adelaide Crows. A loss to the Crows will mean West Coast have had their worst start to a season since the franchise began in 1987. The Bulldogs return to Marvel stadium to meet the Geelong Cats. The Cats will start favorites, but if the Dogs can maintain their intensity, they have a genuine chance of catching the Cats by surprise and strengthening their hold on the top eight.