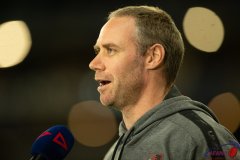 His past history with North was also a deciding factor as he played 93 games for the Kangaroos 1987 - 1985. He believes he can turn around the club's fortunes. He compared North (2 wins so far in 2022) to when he arrived at Hawthorn at the end of 2004 (the Hawks finished 15th) and believes he can turn their fortunes around,

"I look at what transpired at Hawthorn when I arrived ... My vision at that point in time was that it was going to be a six, seven or eight-year process to take a team from the bottom rungs of the ladder up to the top and it happened in four years ... I've been involved in this game for a long, long period of time now and there's no silver bullet with this. Sometimes it just takes a lot of hard work, getting good people together and really tying them into a vision where you bring a lot of good people along with you and you include your supporters in that ... I don't see any difference between North Melbourne or ... a club that's in the amateurs. It's about people and it's about community. If you can bring all of those people together, galvanize them and make them feel like there's this sense of club and togetherness, then you can do some very special things and you can do them quickly."

Clarkson left Hawthorn at the end of 2021 after a 17-year stint that brought premierships in 2008, 2013, 2014 and 2015, saying he rediscovered his passion for coaching while working with the staff at NBA side the Golden State Warriors during their recent championship run.

The day after Essendon's Round 23 game against Richmond, senior coach Ben Rutten was sacked. The decision by the club came  just days after Alastair Clarkson was confirmed as North Melbourne's new coach. It also comes just a week after club president Paul Brasher stood down and was replaced by David Barham.

Brasher said the decision was made due to the team being uncompetitive for much of the season., “We know this has been an incredibly tough time for Ben and his family, and broadly, our whole club ... Ben’s commitment and care for this playing group was second to none ... The unfortunate reality is, at various stages this season we have simply been uncompetitive ... ".

Rutten played 229 games for Adelaide before retiring at the end of 2014. He immediately embarked on his coaching career, starring as a line coach at Richmond for three seasons. He then joined Essendon as an assistant coach. He was appointed senior coach in 2021. In his time as coach, the team won 17 games and lost 27. In 2022, they won just seven games. He did take the team to an Elimination Final in 2021, but it was a loss to the Western Bulldogs.