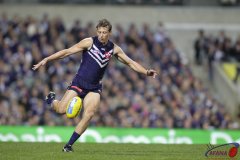 Over 60 players nominated for the mid-season draft, but only 18 were selected. It most likely would have been less except for several sudden retirements and mounting injuries since the season began. When the AFL announced their plan for this draft, only a handful of clubs actually were eligible to participate, but as the weeks progressed, all but four clubs were eligible. Below are the selections. While there are a few former AFL players, most were selected from lower leagues for their first crack at AFL level.

1. Carlton - Josh Deluca, midfielder, Subiaco, originally drafted by Fremantle in 2014, managed just four games before being delisted at the end of 2017.