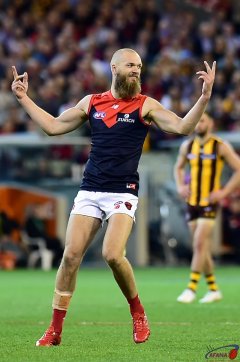 Max Gawn Celebrates
It was a rampant Melbourne football club that moved the ball quickly and deliberately in attack and were well organized and efficient in defense that earned a Preliminary Final berth next week in Perth with a 33-point win over Hawthorn where they will face the West Coast Eagles. The Demons were heavy favorites based mainly on momentum, but it was Schoenmakers that drew first blood for the Hawks in the first minute of the game.
Read more