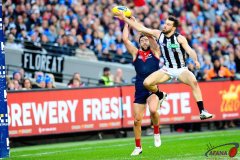 Just after round 15, Levi Greenwood announced his retirement. Greenwood, 32, has not played since suffering a concussion in Round Five. Although the symptoms have subsided, he made the decision after consulting with club doctors and other specialists. Greenwood has a history of concussions and decided to give his health priority.

Greenwood was drafted by North Melbourne in 2007 and played 74 games before being traded to Collingwood at the end of 2014. He played 86 games with the Magpies. He kicked a total of 57 goals in those 160 games.

Milestones for Round 16 include: