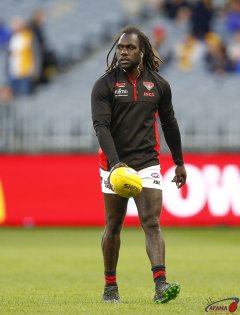 Round Nine is the AFL's Indigenous Round which celebrates the contributions of indigenous players to the game of Australian Rules football. As part of the celebrations, former Saint and Bulldog Nicky Winmar has been invited to launch the round and will return to Collingwood's former home ground Victoria Park. Twenty years ago, the Saints played the Magpies there in a match which became famous. Winmar suffered a barrage of racial abuse from spectators and at the end of the game, Winmar lifted his guernsey and proudly pointed to his dark skin. That moment has become one of the most memorable and iconic in recent League history.

Opposition forwards will be relishing the start of the 2013 season. In recent weeks, it was widely speculated in the media that 2012 would be Matthew Scarlett's last season. This was confirmed after the Cats lost their Elimination Final to Fremantle, with the ace defender later making it official.

The following is the time line for the the Grand Final day events including key times for match and TV related activities.   All times are listed first in Australian AEST and then in US EDT.  This is based on information from the AFL, AFANA, press reports and past history. This story will be periodically updated with late information.  Click on "read more" to see the entire table of events.

Dreamtime At The “G”.

The Tradition of the LONG Walk continues. A journey that started with an idea and a single step, back on 21 November 2004, with Essendon legend and Aboriginal superstar Michael Long undertaking a journey on foot from his home in Melbourne to the nation's capitol, Canberra, continued on a crisp fall day in Melbourne.