The round three Showdown match between Adelaide and Port Adelaide was marred by several unsavory incidents. Which came first is unknown but there was a brawl between a number of spectators in the stands and verbal racial abuse directed at Crow Eddie Betts (who had a banana thrown at him in 2016 - the perpetrator had her membership revoked) and Paddy Ryder. Both clubs have issued statements condemning the incidents and are working with the AFL, Adelaide Oval management, and police 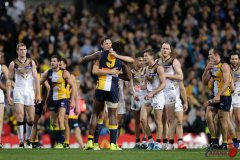 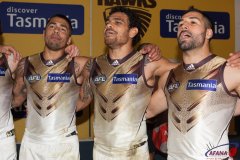 Hawk Warriors Too Tough Too Good

For just under 100,000 fans packed into the MCG and millions of TV viewers in Australia and around the world, the anticipation and tension in the lead-up to the 2014 Grand Final was mouth-watering. Experts had the Swans as outright favorites for the Premiership Cup, bolstered with an unchanged team and by expensive recruits and big men Kurt Tippett and Lance “Buddy” Franklin. Teamed up with athletic giants Adam Goodes and Ben Reid, the Sydney forward line loomed large and many thought unstoppable. The added drama of a Grand Final clash between ex-Hawk Buddy and his old teammates - with whom he won a Premiership only 12 months ago - laid the ingredients on the table for an outstanding contest. Most predicted a win by the Swans and only a few could mount an argument for the Hawks by the very smallest of margins, such was the perceived might of the Swans after their demolition of North Melbourne in the Preliminary Final.
Read more