Update: For offers good after August 6, 2018 go here. WatchAFL is offering a free trial through March 23rd. You will be able to watch all this year's NAB AFL Women's matches (except the Women's Grand Final. The free trial ends March 23rd, WGF is March 25th.) and JLT Community Series games (men's preseason) for free! (you do have to sign up with a credit card or PayPal and cancel before 11:59 PM Australia time on March 23rd or they will start charging your account). There are also Android and Apple apps in the app stores. Go to https://www.watchafl.com.au/ for the details. Our TV schedules page has complete schedules for WatchAFL, Fox Soccer Plus (FSP), and other networks posted now. All JLT Community Series matches will be live on FSP with repeats. The official press release is attached to the full version of this article (click on "more:" if you are reading this on the home page).

2016 Grand Final Live on Fox Soccer Plus, TSN2, and WatchAFL in North America

Fans should carefully note the start and end times of Grand Final coverage in the USA and Canada. We have been advised by Fox Sports that due to music rights guarantees requested by the host broadcaster Seven Network, many broadcasters including Fox Soccer Plus will be unable to show anything except the Grand Final game itself. This will mean coverage will be limited to a window between 12:24 AM and approximately 3:30 AM EDT in the US. Coverage will end shortly after the match ends. Fox has indicated they expect to be able to air the medal ceremony.  Fox Soccer Plus (FSP) in the USA and TSN2 in Canada will carry the Grand Final between Sydney and Western Bulldogs LIVE on Friday night / Saturday morning, September 30th / October 1st.  US coverage on FSP will begin at 12:24 AM EDT Saturday. Set your DVR accordingly by adding extra time before and after so you don't miss any of the medal ceremony or extra time if it occurs! Coverage will continue until approximately 3:30 AM EDT Saturday concluding after the medal ceremony. No other pre- or post-match coverage will be provided. Canadian coverage on TSN2 will begin at 10:30 PM EDT Friday and run to 4:00 AM Saturday. If you have no access to any of the preceding options, the game will be live via the internet on WatchAFL (payment required, US$22) and you can sign up at this link. WatchAFL coverage will begin at 11:30 PM EDT. Fans should check our TV Schedule page for full TV listings including any repeats and our TV Info page for more information on FSP, WatchAFL, and TSN2. For those looking for parties, see our listings on our Grand Final Party page. (Note:  the only live coverage in North America is via these outlets and they are available nationally via cable and satellite services -- see our TV Info page. Asking us if there are others will not get you a different answer because there isn't one.)

2016 Grand Final Parties Around North America and the World 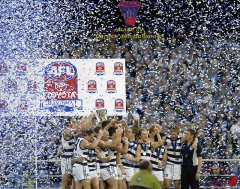 AFL Gets To Roku and Fire by the Back Door

(Ed. note: for the latest on online coverage see our TV Info page. This article won't be updated so go there for current info.)

Effective 6/26/2016, Sony's PlayStation Vue service has added Roku and Amazon Fire apps to their offering which brings AFL to those platforms along with it. Since you can subscribe to the service via Roku or Fire boxes without the need to own a Playstation, it adds another way to get footy onto your TV and avoid subscribing to a full cable TV subscription. High speed internet will still be required, of course.

Pricing probably means it exists as an alternative for the "cord cutters" and no so much for other internet based viewers. The service carries Fox Sports 1 (FS1) and Fox Sports 2 (FS2) in it's base offering ("Access" package) for $29.99 per month along with many other channels.

Gains and Losses in AFL TV Coverage in 2016

Submitted on Thu, 03/31/2016 - 7:01 PM EDT
Changes occurred today in the coverage of AFL games in both the US and Canada. On the US side, a major milestone occurred when Fox informed AFANA that effective next week (Round 3, 2016), one live game per week will move to Fox Sports 1 (FS1). This means that for the first time since 1985, live AFL matches will be on a major sports network in the United States. FS1 reaches 73% of US homes and overnight will expand the potential audience for the sport by tens of millions. Whether this continues will undoubtedly depend on the ratings and the audience reception as well as whether sponsors can be convinced to come on board. Given that the time slots will be very poor, particularly in the eastern US, this will be a challenge. AFANA has already updated its TV schedules to reflect the games on FS1 through Round 10.

Decreasing Coverage on Fox Soccer Plus

Submitted on Fri, 08/14/2015 - 2:17 AM EDT
Fans checking our TV schedule page will notice the rapid decline in AFL coverage on Fox Soccer Plus (FSP), beginning this week and continuing into September. At AFANA, we felt it important to make a statement regarding the situation so that it is understood and the potential long term impact is made clear. Over the past 18 months, FSP has concluded a number of rights agreements for various soccer leagues, both domestic and European. Most of those leagues have now started play for their 2015-2016 seasons. This has meant that the 1 to 3 repeats per week on FSP of all AFL matches on Fox have been reduced. In a few cases, the matches aired live on Fox Sports 2 (FS2) are not repeated on tape delay on FSP. Many of the live matches on FSP have none or one repeat through the first 2 weeks of the finals. Please note that the repeats were not contractually required, so far as we know.  The number of live matches per week has not changed.

Going forward, we strongly encourage fans to check our schedule page frequently and insure that they either watch the match live or record it successfully. For those with WatchAFL, that is also an option. Based on the schedule at present, finals matches will be repeated at most once in the first two weeks. You should not anticipate that any match will be repeated more than once. We do not expect that this will impact Grand Final coverage or that the Grand Final will be shifted off of FSP.
Read more

2015 Grand Final Parties Around North America and the World