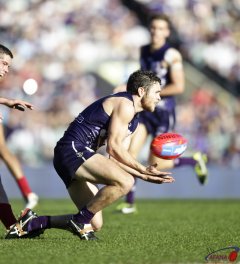 Fremantle moved into the Top Four with a comprehensive thrashing of a demoralized Melbourne in their Round Nine clash at Patersons Stadium. Melbourne’s Jack Watts scored the first goal and for a brief time it looked as though there might be a bit of spirit in the visitors. Unfortunately it was short lived and Melbourne soon crumbled under a relentless and clinical onslaught by the Dockers.

After an initial battering of four or five goals the Demons decided to play possession football and slow down the tempo of the game. Fremantle gradually extended its press up the ground and the Demons began to falter with their kicking accuracy, turning the ball over instead of keeping possession. This saw another flurry of goals and effectively the game was over by midway through the first quarter. The Dockers were lining up to kick goals and six out of their seven for the term were booted by different players. There was nothing that the Demons could do to stop the flow. There was no organization, no leadership and no contested marks when they should have been throwing everything into the fight. Trailing by 40 points at the first siren, Melbourne players looked like fish out of water as they huddled for some words of wisdom from the coach. 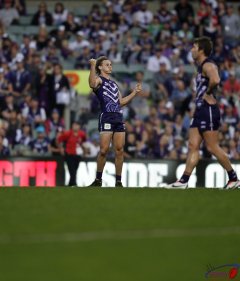 If Nathan Jones had not been on the paddock for Melbourne it would have been much worse. He was one player who could hold his head high when the carnage was over. His determination and attack on the ball despite overwhelming odds should have been a signal and example to his teammates to try harder. Despite being tagged by Ryan Crowley, one of the best in the business, Jones was a frequent thorn in Fremantle’s side and showed real courage in his play all day. Jones was tilting at windmills however and the Dockers continued to pile on the goals while systematically shutting down Melbourne’s attack. One bright light for the Demons was when Jack Trengove - in only his second touch of the football for the match - played on and scored their only goal for the quarter. It was a rout though and while the white flag wasn’t raised, it was certainly being unfurled. Fremantle ended the first half 71 points up on the Demons. 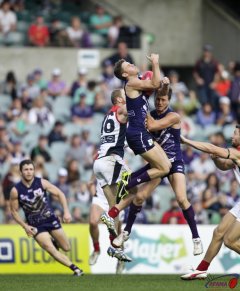 As always a break and regroup can have a beneficial effect on a team that is getting pounded. Melbourne came out after half time with renewed purpose and although still having trouble getting the ball forward, Demons' players hit their stride early in the piece. They scored the first two goals of the third term and looked to have some spark about them. They were not afraid to lay some tackles and their first goal - courtesy of Jeremy Howe - came as a result of that pressure. The Dockers had slackened off their attack and Melbourne were finding holes to move the ball through. Howe kicked his second goal after a strong mark and the increased Demon work rate was beginning to pay off. Midway through the term substitutes were made by both sides with Rohan Bail on for Neville Jetta who had not been sighted all day (Melbourne) and Nick Suban replacing Luke McPharlin (Fremantle). The extra hardness saw Melbourne actually win the third quarter, albeit by a meager three points, but they still trailed by a massive 11 goals plus on the siren.

In the final term Melbourne went into a man-on-man formation instead of their zone in an attempt to put more pressure on individual players and force more turnovers. It looked to be working for a while but the Dockers were finding gaps in the Demon defense and continued to score. Fremantle players were a little sloppy though and missed easy marks and kicks as the game wound down. As fatigue set in, both teams slowed the play down and it was evident that Fremantle was content not to risk injury in a game that was well and truly won. The final whopping 90 point margin was an accurate reflection in the difference between the two sides on the day.

Melbourne really does have some demons in their baggage and players have a look of despair about them even before they step onto the field. They face some tough opponents in the next two weeks and beltings of epic proportions look certain. It remains to be seen whether Coach Neeld will keep his job and he may very well be the first victim of the year in the coaching witch hunt. Fremantle continue to impress with some key players missing and the solid work by their journeymen replacements has personified the hard working, ‘never say die’ attitude that has been lacking in past years.