Essendon players withered on the vine in the stifling 90-degree plus Perth heat and were buried under a burst of third quarter brilliance by the Fremantle Dockers to be overrun by 53 points in their Round 4 clash. Slow and steady was the mantra for both teams during the first part of the match as the strength-sapping temperatures made sustained running almost impossible. The Bombers were patient with the ball and racked up possessions with accurate kicking to teammates in the clear. It was an arm wrestle with the Dockers getting the first couple of goals on the board through Ryan Crowley and Danyle Pearce. Jobe Watson and Joe Daniher evened it up with goals for Essendon, with Watson’s goal surely in contention for goal of the year. He booted it from a very difficult angle deep in the pocket just when a Captain’s goal was needed.

Essendon suffered a blow when Brendon Goddard was substituted early in the second quarter with a pulled adductor muscle and Leroy Jetta stepped in. Jetta put some zip into the Bombers and was instrumental in some fast break style scoring goals to take them out to a slender lead. Both teams were struggling to get the ball into their attacking 50-meter zones but Fremantle managed a run on goals, scoring three to take some momentum into the main break.

Youngster Josh Simpson was subbed on for David Mundy soon after the game restarted, Mundy having been concussed after copping a heavy hit from a teammate. The incident had no effect on the Dockers as they proceeded to take the game apart, kicking seven unanswered goals. T 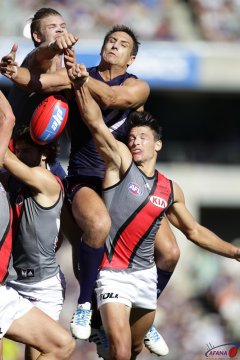 he Bombers were shell-shocked and wilted under the heat and sustained pressure on offer from the Dockers. Captain Matthew Pavlich stamped his mark on the game with some inspired football and goal kicking. It was a blitz from which Essendon did not recover. Jetta scored their only goal late in the term after his opponents collided and took each other out of the play, leaving him the only man standing to run into an open goal.

There was some face saving by Essendon as the game wound down and the Dockers took their collective feet off the pedal. Kyle Hardingham kicked a couple of consolation goals and tried hard to recover some pride for his team. Fremantle ran out comfortable winners by 53 points when the final siren sounded and regained some of their belief after last week’s humiliating defeat by Hawthorn on the road. Essendon will look to return home and face St Kilda in the cooler environs of Etihad Stadium in Round 5. The Dockers will travel to Sydney to shape up against the Sydney Swans at the SCG (Sydney Cricket Ground) where they were thrashed by North Melbourne this weekend.