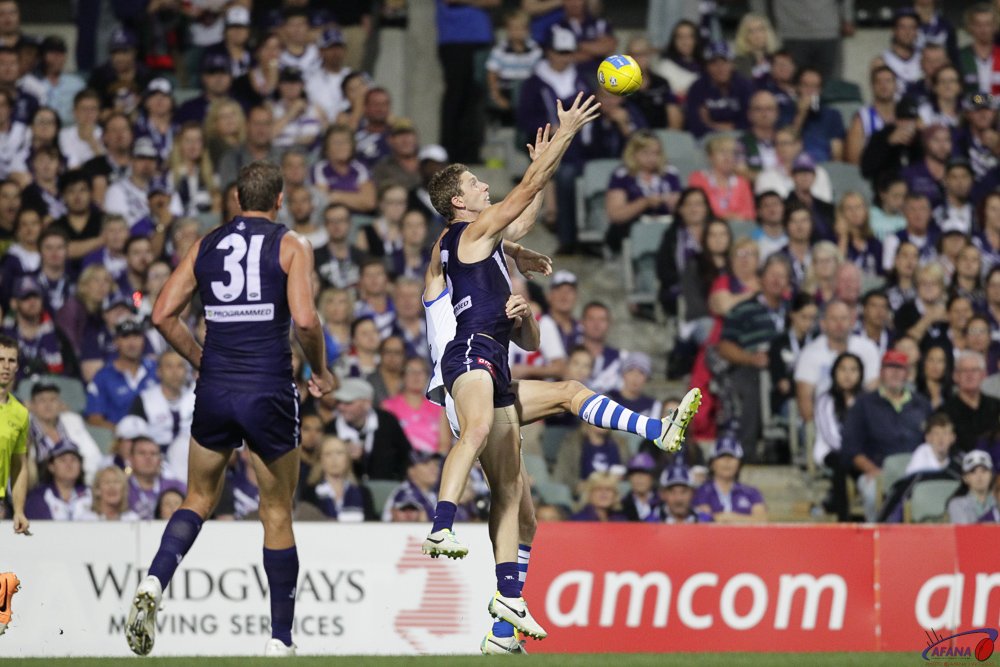 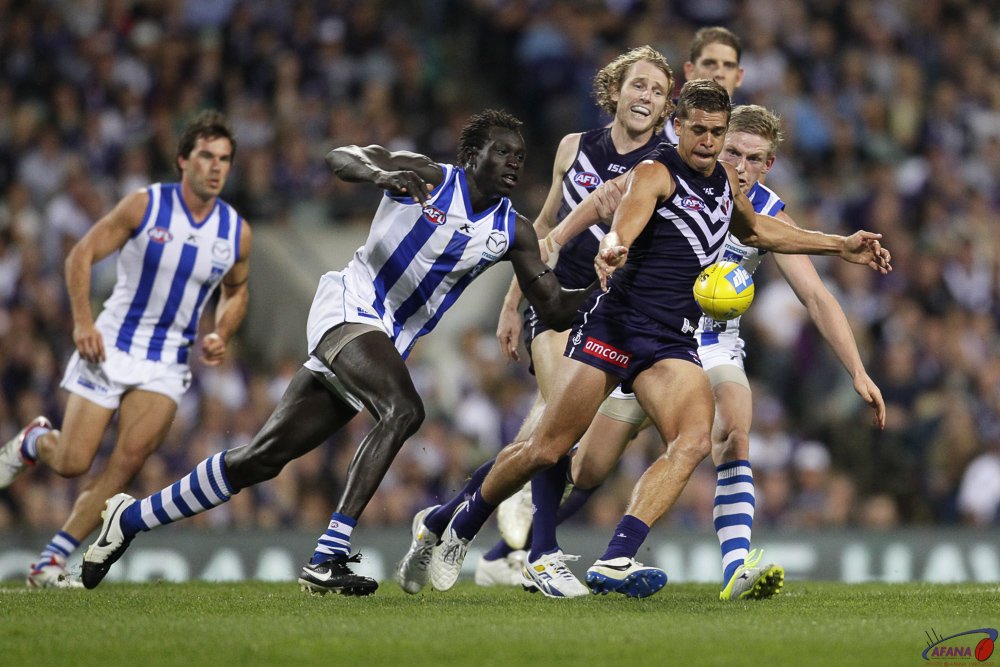 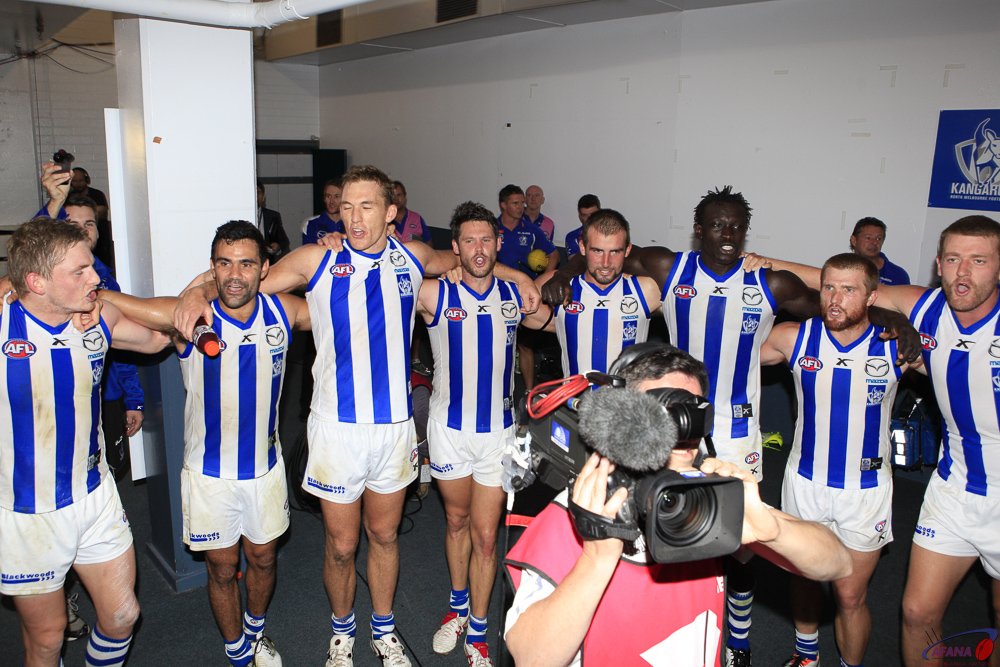 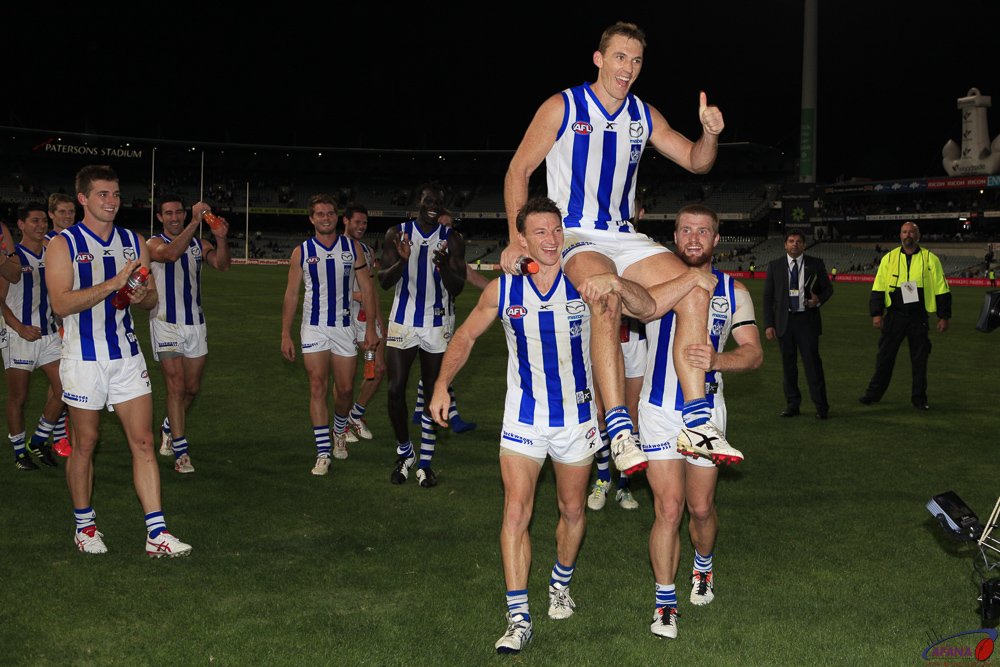 After a poignant pre-game ANZAC ceremony, the traditional Len Hall match began and the bumper home crowd of 36,500 was treated to some Dockers' magic. Although the first goal took an eternity, Fremantle then piled on four more, albeit with the help of some questionable free kicks that went the home team’s way. The free kicks started to even up late in the quarter, giving the Kangaroos a couple of goals to keep them within striking distance.

North began to think their way through the Fremantle defense while some errors were starting to creep into the Dockers’ game. The North players were tenacious at the ball, traveling in packs and gang-tackling Fremantle players as soon as they gained possession. Fremantle got into the habit of kicking the ball in long to their forwards but it was a wasteful and inefficient method of attacking. In contrast the Kangaroos were more accurate in their passing and outscored the Dockers in the second term although they still trailed by eight points going into half time.

Both teams missed opportunities in kicking for goals. Fremantle players were flat-footed on many occasions and began to self-destruct under the Kangaroos’ pressure, becoming hesitant and unsure of what to do with the ball. Coupled with some dreadful ball delivery, it was only a matter of time before the Dockers surrendered the lead. In fact at one stage of the game Dockers' players were kicking at 38% efficiency, only marginally better than the Little League game held at half time.

Toward the final stages of the game, the Kangaroos put their collective feet on the accelerator and pulled away steadily from Fremantle. It was inevitable that they would go on to win the game - Fremantle just weren’t in the hunt the longer the game went.

Patersons Stadium is a hoodoo ground for the Kangaroos and it was sweet victory for them as they celebrated by chairing 250 game man Drew Petrie off the ground. The Fremantle Football Club has some problems, not the least of them being the woeful skills on display both in this game and in last week's encounter with the Swans. There are cracks in their discipline both on and off the field and they have a lot of work to do before they are going to be considered a real threat in this year’s race to the Finals.