Submitted by johnson on Fri, 07/03/2015 - 1:25 PM EDT
by Johnson Leung reporting for AFANA in Melbourne assisted by AFANA staff in Australia, Canada, and the USA 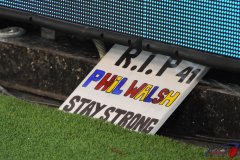 Walsh's son Cy, 26, was arrested by police a short time later outside a school friend's house at Glenelg East (1 mi north from Somerton Park), where he had been regularly staying. Cy was sent to the same hospital for psychiatric assessment and was charged with murder at a bedside hearing in Friday afternoon. He has since been moved to James Nash House, a secure mental health facility, and will remain in custody until a court hearing on September 15. We have details of the impact to US TV coverage toward the end of this article.

Walsh came from Hamilton, a small country town in western Victoria. He started his VFL playing career with Collingwood in 1983 and won the club's equivalent award for "Rookie of the Year" that year. He successfully launched a lawsuit against the Magpies in 1984 so that he and teammate John Annear could play for Richmond, as the two clubs embarked on a player poaching war. Walsh played 122 VFL games for Collingwood, Richmond and Brisbane Bears between 1983 and 1990, kicking 41 goals. After he retired as a player he became a fitness coach at Geelong in the late 1990s before becoming Assistant Coach at Port Adelaide, where he helped the club to win its first AFL premiership in 2004. He moved to West Coast five years later as Assistant Coach before returning to the Power last year. In October that year he was appointed Senior Coach of the Crows for the next three years, replacing Brenton Sanderson who was fired earlier in the season.

In a media conference in Melbourne on Friday afternoon local time, AFL Chief Executive Gillon McLachlan announced that Sunday's game between Adelaide and Geelong would not go ahead, as a mark of respect to Walsh, after consulting the two clubs and the AFL Players Association. McLachlan said "this is a decision of the competition as a remark of respect to Phil Walsh. It is our decision, because while playing footy can be part of the grieving process, we are strongly of the few that it is not fair to ask the young men of the Adelaide Crows or the Geelong Cats to play in these circumstances." He added both the Crows and the Cats would each receive two premiership points as if the game has ended in a draw. McLachlan described Walsh as "a man of boundless energy, enthusiasm and great intelligence" and said the AFL industry would offer all the support it could to the Crows.

McLachlan also said the remaining seven games of Round 14 (Sydney defeated Port Adelaide on Thursday night) would be played as scheduled, however there will be special arrangements: Both Crows Chairman Rob Chapman and CEO Andrew Fagan were visibly upset when they held a media conference at club headquarters later that day. Chapman said he received a call from police at 3.30am local time that a tragedy had unfolded and it involved Walsh. Chapman said it was a "phone call no-one ever wants to get" and it was difficult to come to terms with the shocking news. Chapman vowed the club would continue Walsh's work, saying "We started a journey, not that long ago, under Phil and his leadership. It’s a journey that the playing group and the club are determined to see through." Fagan said that Walsh's legacy at the club would last longer than the 12 games he coached. He said the impact Walsh made at the club "...won’t ever be lost... There are plenty of stories about a guy who was in the industry for 32 years and worked across seven clubs, and was impactful as he was... It’s a great character trait when you can be so impactful to so many people in your time." Crows players received counseling during Friday and Saturday. Fans from both Adelaide and Port Adelaide laid flowers, cards, scarves and other memorabilia outside the Crows administration offices throughout the day and night, to pay tribute to Walsh.

Walsh's daughter Quinn, 22, was on a US summer camp when she heard the shocking news and rushed home to be with her family. She wrote on her Facebook page: "Hold your family close, never for a second take them for granted for that will be the second you lose them. I have lost half my family in a blink of an eye, nothing will be right with the world again. Wanna thank everyone for the support and love, will be home soon to be with my mother and to say goodbye to my one and only hero."

The thoughts of everyone at AFANA and AFL fans in North America are with Walsh's family and friends and the Adelaide Football Club. 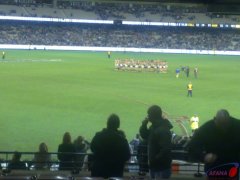 Players from Collingwood and Hawthorn paid their own respect to Walsh by forming a circle in the middle of the MCG after the final siren of the game played Friday night Melbourne time. Hawthorn's Jordan Lewis later told 3AW it was his coach Alistair Clarkson who suggested this idea to his Collingwood counterpart Nathan Buckley before the game, and that only respective club captains (Luke Hodge and Scott Pendlebury) were told about the tribute so it would not interrupt player preparations for the game. A link to a video is on our Facebook page along with other photos of the scene. Our Facebook page has continuing coverage.

The AFL CEO, Gillon McLachlan, announced that the Adelaide v Geelong game will not be played this weekend (round 14, 2015) and instead both clubs will get credit for the game as if it was a draw according to the AFL rules for games that cannot be played due to unforeseen circumstances. The remaining seven games this round will go ahead as scheduled. Fox Sports Plus and TSN2 will instead air the Essendon v St Kilda game in its place. FSP will have it live and then repeat it in the same timeslots originally intended for the Adelaide match. TSN2 will air the replacement game in the same tape delay slot they had the Adelaide match. All of our TV schedules have been updated to reflect this. The various radio networks are expected to air memorial coverage in their timeslots however this is still unconfirmed and details are just now filtering in. WatchAFL is not expected to air any special programming instead however should that change, we will advise. Coverage of any memorial services are yet to be announced but can be expected either on the AFL web site or the various media web sites.