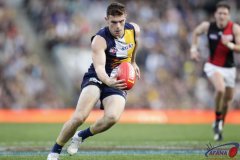 Adelaide players were a little sluggish at the start of the match after a fast start by West Coast, but they soon found their feet and punched back, outscoring the Eagles by two goals in the first quarter. Charlie Cameron and Tex Walker kicked two goals each in the opening term. Adelaide had found the key to the “Web” that the Eagles had been employing in their defense - go quickly and long through the middle and have the opponent turn and chase you down the ground. With ten goals scored in the first quarter it was an entertaining game of football.

There was rabid tackling from both teams whenever the opposition gathered the ball. West Coast began to pull away from Adelaide and blanketed them when they were trying to move into attack. Much of the game was played in the Eagles’ forward half and they had roughly four times more 50 meter entries than Adelaide. The dam wall well and truly broke towards the end of the first half with West Coast kicking eight unanswered goals to Adelaide’s solitary point.

After the main break, Adelaide came out onto the ground with renewed determination. They took a short jab when Luke Shuey (playing his 100th game) kicked the first goal for the Eagles, but bounced back with intent soon after. Matthew Wright kicked the Crows' first goal since the first quarter and it lit a spark under his teammates. They started the long climb back into the game with goals from Tom Lynch, Tex Walker and Brodie Smith. When Riley Knight kicked his first goal in AFL football, there was an air of excitement that Adelaide would take the game up to the Eagles. In fact they won the third quarter by a couple of goals and were fired up.

However in 2015, West Coast players finish off what they start and they took the wind out of the Crows with the first four goals of the final term. Nic Naitanui was dominating in the ruck and the smaller on-ball men were cleaning up around the stoppages. Adelaide fought it out to the end and scored a couple of goals late, but it was a lost cause. There was none better than an Eddie Betts’ left foot torpedo punt that traveled 50 meters to the goal from the pocket and bounced the right way at the last second.

After the match all players gathered in the center of the ground for a moment’s silence in final tribute to Phil Walsh. Some Adelaide players were unable to hide their grief. It is very rare to see six foot five, burly footballers sobbing openly in sight of other players but there were many tears apparent not only amongst the playing group but also mongst the coaching staff, players' families and in the crowd as well. A rousing standing ovation was heard as the Adelaide players left the ground.