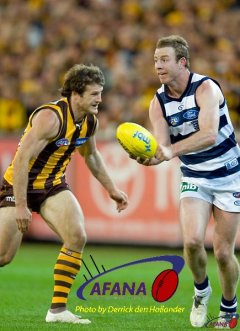 The Cats missed the Final Eight for the first time since 2006. With that and the departures of Steve Johnson, James Kelly and Mathew Stokes, one of the greatest eras in Geelong history is nearing an end. All three players are still considering careers elsewhere. Johnson said ahead of his last game that playing for the Cats and enjoying all the success alongside so many great teammates had been a dream come true. He went on to thank everyone at the club, teammates and staff alike as well as the supporters who stuck close even through the hard times. He believes the club is heading in the right direction and will have more success in the future.

Coach Chris Scott paid tribute to Johnson and his contribution to the club, “Steve is without doubt one of the greatest players that the club has seen and it is very difficult to see him finish his career ... Steve was one of the players I enjoyed playing against and watching ... His ability to change games will live long in all of our memories. There is a reason he is so popular among not only our supporters, but through the whole football community. There has never been a dull moment with Steve on or off the field." Scott also said he believed Johnson had the ability, intelligence and temperament to succeed as a coach if he chose to do so.

Mathew Stokes knew several weeks before the last round that he would not be offered another contract. Kelly also knew for some time that it would be his final season for the Cats. 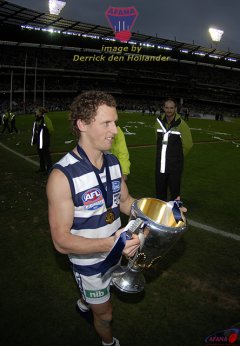 Both preferred to keep quiet and just continue to play their best. Both, like Johnson were, not unexpectedly, emotional before and after the game. Kelly spoke of the gratitude he has for the club. “The overwhelming feeling ... at the moment is I just feel really grateful, grateful for the people I’ve met, grateful for all the fun we’ve been able to have ... everyone I’ve played with has made me the player that I am and made me a better player than I could have been anywhere else ... I thank the footy club for the opportunity to be able to do something that I love for a long period.” Chris Scott paid tribute to Kelly, saying “Kel has always been able to play a variety of roles and put the team’s needs first. He has been a leader within the club and one of the people that younger players could look to ... He has been an integral element of the success we have enjoyed."

Stokes also expressed his gratitude to the club for the opportunity to play after being overlooked in three drafts. He said the Cats were the only ones who took a chance on him. “To have played here and enjoyed the success that we have and to have done it with people that are and will be my best friends for life has been a great experience." 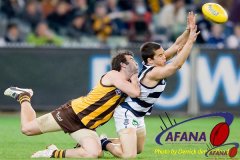 Scott praised Stokes as both a player and leader. “Stokesy has been a great player to coach and a fantastic contributor ... He ... has given everything ... and been a key component of an incredible period ... Mathew’s resiliency is something that I really admire and is a shining light for others to follow."

Scott acknowledged the difficulty the club faced in making the decisions but said Stokes had handled it all very well and during his stints in the VFL had done a great job mentoring the younger players. Off the field, according to CEO Brian Cook, Stokes has worked in the club's community department, assisting with Geelong's Indigenous Program, Closing the Gap. He ruled himself out of the 2009 Premiership due to an injury but went on to kick a crucial goal during the second term of the 2011 Grand Final to put the Cats within 12 points of the leading Collingwood.

MATHEW STOKES
Games: 189
Goals: 203
Honors: Played for the Indigenous all stars in 2007 and 2009; Represented the Dream team against Victoria in the 2008 AFL Hall of Fame game; Holds record for most games by an Indigenous player for Geelong; International Rules series 2013

Two more Cats also retired. Both Jared Rivers and Sam Blease were forced to call time before the season ended after battling injuries. Round 20 was Jared Rivers' final game with the Cats' defender admitting his knees "finally won". 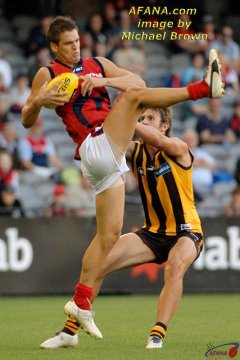 He said he is a bit sad about not getting to run out onto the MCG anymore, but said he had felt lucky to play for the two oldest clubs in the League having begun his career with the Melbourne Demons in 2003. Ironically, it was a game against the Cats in which he made his AFL debut.

Rivers played 150 games for the Demons, winning the AFL Rising Star Award in 2004, before crossing to Geelong as an unrestricted free agent at the end of 2012. He was hopeful of playing in a premiership with the Cats but it never eventuated. Still he is happy to have played in eight Finals' games alongside some Geelong greats. He was restricted to just ten games in 2013 due to knee and groin injuries but returned in 2014 to be a key to the Cats' defense in 22 games. He injured a knee again in Round 15 and missed four games. He returned in Round 20 to bring his tally as a Cat to 45 games. Coach Chris Scott said Geelong had recruited Rivers to fill a role in defense and that despite injury, he was always reliable. "“Jared was hampered by injury ... but he pushed through that to help us win a lot of games ... Jared is very popular with his teammates and the coaches and staff, and we wish him well." Rivers has already completed a coaching course and will remain with the Cats to continue his off-field development.

Geelong midfielder Sam Blease has retired after consultation with medical experts, who have told him he should never play contact sports again after suffering a bad head knock in a VFL game. The hit sidelined him for the season in late July. Blease, 24, joined the Cats as a delisted free agent from Melbourne. Drafted by the Demons in 2008, he missed the entire 2009 season after suffering a badly broken leg during a school kick to kick with friends. He finally made his debut as a speedy midfielder or running defender in 2011 and went on to play five games. He played a further 16 games in 2012 but a bad ankle injury during the 2013 preseason hampered his year and he played only ten games. The ankle problem continued to plague him in 2014 restricting him to just two more games.