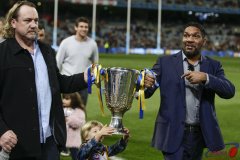 Essendon though had come to play football and surprised the home team by winning the first clearance via Craig Bird, who drove the Bombers deep into attack. The patched together Bombers then locked the game in their forward line until Mitch Brown kicked the ball soccer style into the goal square to register the first goal. Two minutes later Brendon Goddard kicked a long shot from the right half forward boundary to do the unexpected. The Bombers were in front by two goals after only three minutes. It was left to Josh Kennedy to perform a clever gather of a loose ball to snap truly from 45 meters and restore some sense of order to the Eagles’ plans. However, with Matthew Leuenberger dominating Scott Lycett in the ruck and  clever work by Darcy Parish and James Kelly, the Bombers were winning the clearances. By the end of the first quarter the Bombers had preserved the early lead.

In the second quarter Andrew Gaff, Matt Priddis, and Luke Shuey began to work the ball away from stoppages. Lycett became more competitive in the ruck but was still outgunned by Leuenberger. Kennedy kicked an early goal as a result of a holding call and subsequent free kick against Michael Hartley. Gaff capped off some clean handpasses by Kennedy and Jack Darling, to kick into an open goal. Essendon big men, James Gwilt, Mark Jamar, and Courtenay Dempsey provided some useful aerial defense for the Bombers, which prevented the Eagles running away with the game. However, the hosts persisted and scored a good team goal when Patrick McGinnity gathered after a long kick into the Eagles’ forward line; and then Priddis finished well from a Kennedy handpass. Essendon though did not throw in the towel. A clever set shot by Joe Daniher from the forward pocket, resulted in a major score and the Bombers were still in touch with the home team. At the 23-minute mark, a long kick out of defense by Will Schofield saw Mark Hutchings gather for the Eagles and score the final goal of the half. Essendon had surprised the Eagles by their desperation. In spite of winning the contested possessions and leading in the tackle count the Eagles were now in front.

The third quarter began with the Bombers defensively flooding players into the Eagles’ attacking zone. The Eagles were forced to work the ball across the center of the ground, to try to find openings to attack. They probed with long kicks, hoping either Darling or Kennedy would mark. But the Essendon defenders were up to the task and spoiled or out marked the big Eagles. Martin Gleeson contributed five valuable intercepts for the Bombers. Essendon moved the ball around and used the full width of the field to attack. Their kicking let them down which caused costly turnovers whenever they threatened to score. At the 14-minute mark, an Essendon infringement against Shuey allowed the Eagles to score their first goal for the quarter. Leg injuries to Leuenberger and Jamar ended Essendon’s ruck dominance and the game opened up. The Eagles started to move the ball from end to end with deadly efficiency. Kennedy and Jack Darling both scored from quick defensive transitions. The situation looked ominous for the Bombers.

The fourth quarter began with Elliot Yeo swinging the ball infield to LeCras, who marked and goaled. Essendon replied three minutes later with a strong mark in front of a pack by Joe Daniher, who kicked his third goal. Then the game changed completely. The home side dominated at center bounces and cleared the ball with ease. The Eagles got their running game going and attacked directly down the ground, finishing with nine goals for the quarter. A goal after the siren to Orazio Fantasia was little consolation to Essendon, who were comprehensively outplayed for the final 25 minutes. Essendon had bravely challenged West Coast. Injuries to their two ruckmen and with their veterans tiring, the Bombers were no match for West Coast.

Next up, Essendon face a fast improving St Kilda. Even with the benefit of a ten day break, it is unlikely the Bomber’s two ruckmen will be available. Their second half of the season is shaping to be as difficult as their first. West Coast will host North Melbourne. The Eagles performance against a weakened Essendon did not offer assurance that they will soon defeat a top eight side. They move to sixth spot on the ladder, but their work for three quarters against the bottom team simply provided more questions than answers.