Despite an almighty scare against the lowly ranked Tigers, the Western Bulldogs ran out 10 point winners in a stirring contest at Etihad Stadium on Saturday night. Fielding a young team with one eye firmly on the future, the Tigers almost pulled off a massive upset as they led deep into the final quarter. 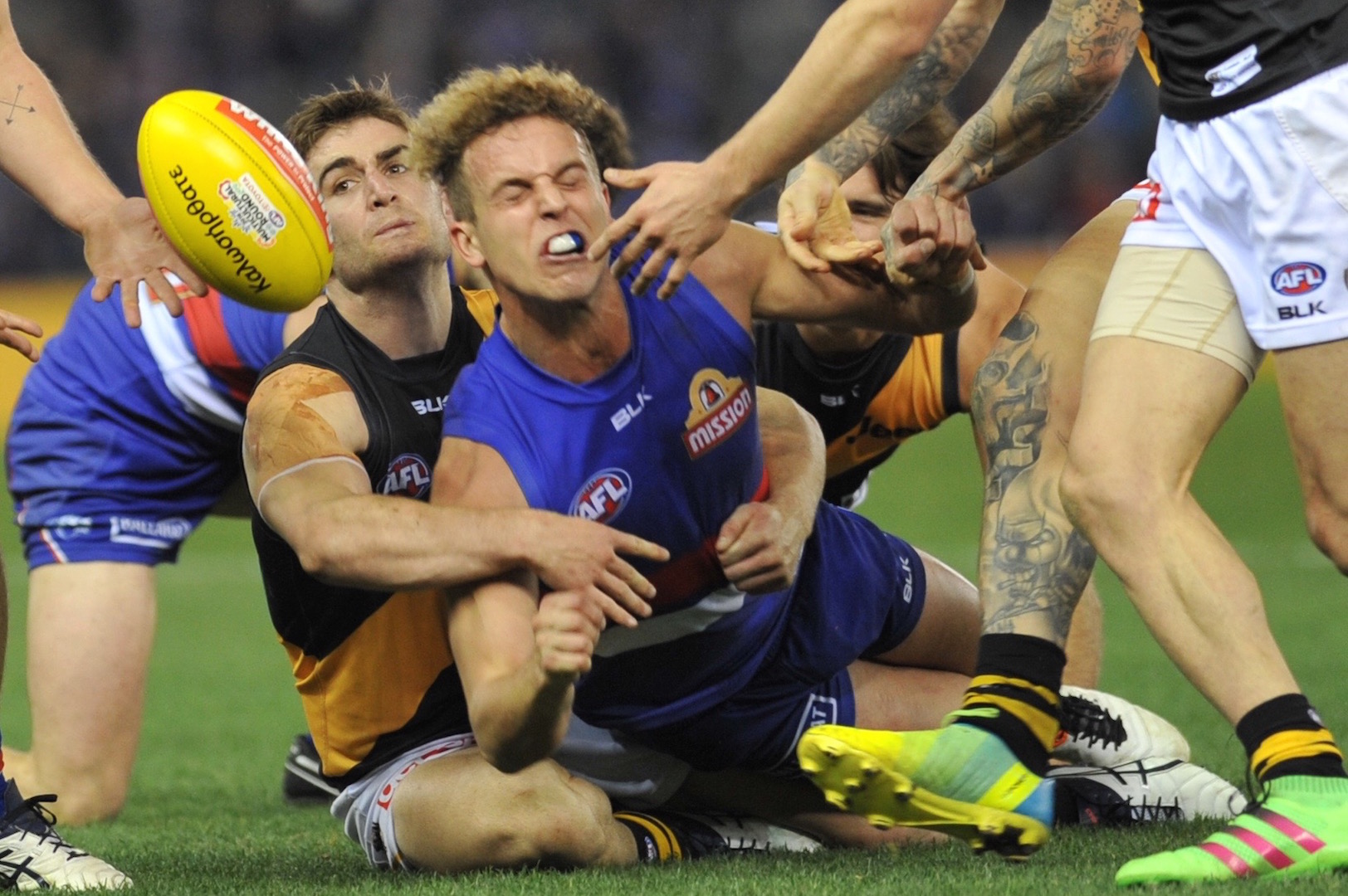 In the end it was the class of the enigmatic Jake Stringer and young gun Marcus Bontempelli that helped the Bulldogs to victory and kept their top-four hopes alive.

As expected the Bulldogs looked the better team early, kicking two of the first three goals as the Tigers struggled to hit their intended targets in attack. With a nine point lead late in the first quarter, a committed Richmond outfit fought back, a late goal to third-gamer Jason Castagna bringing the Tigers to within just two points of the favored Bulldogs at the first change. With Stringer being well controlled by Richmond’s Nick Vlastuin, the Bulldogs were struggling to get the reward for multiple entries into their forward 50 meter zone.

The Bulldogs knew they had a game on their hands in the second quarter as Castagna nailed his second goal before the Tigers added three more from Shane Edwards, Sam Lloyd and Jack Riewoldt to give the visitors a surprising 12 point buffer. The Tigers were taking the game to the Bulldogs all over the ground; with ruckman Shaun Hampson getting the majority of hitouts to feed his hungry midfield. A strong mark from Bontempelli had the Bulldog fans up and cheering, and when Tory Dickson pounced on an error in the Tiger back line, he too converted to grab a one point lead back for the Bulldogs at halftime.

The third quarter was an arm wrestle with goals at a premium. Dustin Martin was again outstanding for Richmond gathering possessions all over the ground, ably supported by Captain Trent Cotchin and first gamer Oleg Markov. A timely goal from Tiger Brandon Ellis was one of few third quarter highlights. Lachie Hunter and Dale Morris were standouts in defense for the Bulldogs as the Tigers pressed, building a handy lead in the low scoring affair before a late goal to Jake Stringer reduced the margin to just seven points at the final change.

The Bulldogs came out firing early in the final quarter with goals to Jason Johannisen and Stringer, and it looked like finally the Bulldogs would snuff out the Tiger challenge. Enter Shane Edwards who set up a goal for Riewoldt before adding one of his own to turn the game on its head. A tough holding the ball decision against Richmond’s Reece Conca led to a 50 meter penalty and a gimme goal to sway the momentum back in the Bulldogs favor, and finally Stringer got off the leash to seal the deal with a late goal and kill off the gallant Richmond challenge.

While the Bulldogs weren’t at their best, coach Luke Beveridge would have been ecstatic to get the points in a hard-fought contest against Damien Hardwick’s plucky Tigers. The news wasn’t all good for the Bulldogs as midfielder Tom Liberatore appeared to suffer a nasty rib injury late in the second quarter. Next up, the Bulldogs take on an improved Gold Coast Suns at Cazaly Stadium, while Richmond faces Essendon at the MCG on Saturday.